Between the months of 1 January 1830 and 1 January 1831, six ships departed Ireland with approximately 850 prisoners bound for New South Wales......

The Return of the Number of Convicts Transported from Ireland to New South Wales between those dates reveals that the prisoners had been held in the following three prisons:

The total of 854 prisoners noted in the Return is a little short of Charles Bateson total in The Convict Ships (845), but is close and may not account for those who were rejected by the surgeon as being too ill to survive the voyage.

The Forth (II) was the next convict ship to leave Ireland for New South Wales after the departure of the Forth (1) in January 1830.

Embarking On The Forth

The Times reported in June - On Thursday morning at an early hour, 120 female convicts were removed from the Penitentiary to the 'Lee' steam boat, and proceeded in her to the 'Forth' convict ship at Cove, in which they take their passage to NSW. There are also the wives and children of 23 free settlers, who proceed in this vessel by the humane grant of Government, for whom every necessary has been provided. It was pleasing to observe the healthy appearance of the convicts, on their way to the steam boat, and also the demeanour which marked their sensibility at leaving their native land, under circumstances which attention to morality would have prevented. 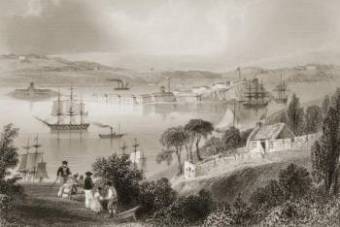 This was Joseph Cook's sixth voyage as surgeon superintendent on a convict ship. He kept a medical journal from 28th April 1830 to 4th November 1830. He recorded in his journal that 120 female convicts and 10 children belonging to them; 8 free women and 19 children belonging to them were embarked in the last week of May, and their general appearance indicated a healthy state.
The first case treated by the surgeon was Jane Taylor on 29th May, who accidentally fell down the hatchway, a distance of about 11 ft, injuring her leg and side. She was described as a heavy corpulent women of weak intellect.

From the Surgeon's Journal - On the 3rd June, the ship sailed from the Cove of Cork, on the 12th arrived in the N.E. trade and on the 3rd July crossed the Equator. On first sailing the passengers generally were much affected with the indisposition of sea sickness followed by constipation but in other respects the general state of health was good. On the passage within the Tropics, a considerable number were affected with bilious derangement of the stomach attended with constipation and in some cases colic pains, but unaccompanied with fever and relieved by one or two cathartics.

In August, September and the beginning of October, the ship proceeding to the Eastward the prevailing winds from NW to SW but occasionally NE or SE with the latter catarrh occurred and on instance terminated in pneumonic inflammation. In consequence of change of diet, constipation prevailed much during the whole of the passage. [1]

On 12th October 1830 the Forth arrived in Port Jackson, and the surgeon recorded that the general state of health of the women was good and none were required to be sent to the hospital.

A Muster was held on board by the Colonial Secretary Alexander McLeay on 14th October 1830. Information recorded in the indents include Name, Age, Religion, Education, Marital Status, Family, Native Place, Trade, Offence, When and Where Tried, Sentence, Prior Convictions, Physical Description and where assigned on arrival. Also included is occasional information regarding relatives already in the colony, deaths and pardons.

Except for two cases the convicts were landed fit for service on 23rd October 1830.

Just three weeks later some had already been before the Bench for bad conduct....

The damsels per Forth appear to be nothing behind their predecessors, the Roslin Castlers in behaviour. Several of them have already been before the Bench, and, it would seem, are fully determined to assert the preeminence of the lasses from the Emerald Isle. (Sydney Gazette 11 November 1830)

Bridget McCarty per Forth, for being several hours absent from her service without leave, and a useless character when at home, was ordered to be confined fourteen days in the second class of the Factory. (Sydney Gazette 27 November 1830)

In March 1831 Bridget Meany and Johanna Spillane took part in a riot at the Parramatta Female Factory. They were charged with mutinous and riotous conduct and sent to Newcastle as punishment.

1). The Forth was one of three convict ships bringing female prisoners to New South Wales in 1830, the others being the Asia and the Roslin Castle. A total of 444 female convicts arrived in the colony in 1830.

6). Four prisoners of the Forth had been tried in Limerick - Eliza Higgins, Alice Callaghan, Elizabeth Lahiff and Mary Barrett. They may have been incarcerated there when the following escape took place.......

Escape of Convicts from Limerick Jail - On Sunday last, at eleven o'clock, nine female convicts all under sentence of seven years' transportation escaped from the city jail. A rigid inquiry was instituted by the Sheriffs, when the following facts were elucidated: -

The nine convicts had been secretly provided with a file and aquafortis, also a short iron bar, in order to facilitate their liberation. Two men from the outside scaled the prion walls, on Sunday night and, by means of a ladder, gained access to the women's ward. Now came the trial of ingenuity, for the locks of a range of cells were to be forced, and the inmates enlarged, without disturbing the persons in charge of the prison. It is right to observe that the prisoners frequently indulged in singing and noisy vociferations after nightfall; this amusement they enjoyed with more than ordinary spirit on this occasion. Meantime the iron fastenings were assailed by the burglars. Thee locks gave way before repeated efforts, and nine females, with an infant, were extricated from durance vile. The ladder was again in request. One after the other mounted the wall which confines the ward, and sat perched in a row on the summit while the ladder was being drawn over and laid down against the other side, by which they descended. They traversed a short yard, where the same feat was accomplished at the second barrier, and with equal success. The third and outer wall was carried by a similar coup de main, and the eleven persons made their escape into the streets, unnoticed by any of the persons on watch - The consternation of the jailer and keepers next morning it is easier to imagine than describe. - Belfast Newsletter 25 May 1830.

[1] Ancestry.com. UK, Royal Navy Medical Journals, 1817-1857. Medical Journal of Joseph Cook on the voyage of the Forth in 1830. The National Archives. Kew, Richmond, Surrey.