William Henry Trotman was appointed to the position of Surgeon Superintendent on 27th October 1830 and joined the ship two days later at Deptford. He kept a Medical Journal from 29 October 1830 - 13 May 1831. 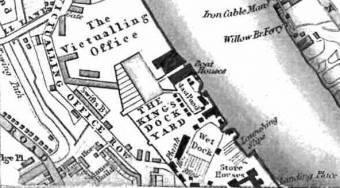 ...Section of Map of Deptford by George Crutchley, 1833. Click to enlarge

The Guard was embarked with the women and children on the 6th November. The Guard consisted of 1 serjeant, 1 corp. 27 rank and file, 9 women and 2 children of 82nd and 29th regts., under command of Lieut. James Sweeney of 26th Regiment with Mrs. Sweeney and 2 children.

The Waterloo weighed anchor and sailed for Kingstown, Dublin on 9th November. After a very rough and disagreeable passage they arrived at Kingstown on 25th November.

On 8th December 200 male convicts from the Essex Hulk were embarked. According to the surgeon, they were mostly young men, lads and boys, but very few old men and they were generally speaking in a tolerable good state of health, a few only were weakened and sickly and a few others appeared to be labouring under chronic or organic diseases.

Having departed Kingstown on 18th December 1830, the Waterloo crossed the Equator 24th January 1831.

During the passage the weather was mostly cold and wet, the wind boisterous and the sea rough except when crossing the Tropics when it became hot and sultry with light winds and smooth seas. There was a great deal of rain and consequently the ship was always very damp.

The Surgeon remarked in the journal that the diseases most prevalent were itch and scurvy; induced under such a variety of forms, almost every complaint was either complicated with scurvy or aggravated by scorbutic diathesis, which in general yielded to nitre and lime juice. There was only one death and this took place as the ship lay in Sydney Harbour. [2]

The Waterlooarrived at Port Jackson 30 April 1831, having taken 133 days which was considered a long passage for a convict ship.

The convicts were mustered by Colonial Secretary Alexander Macleay on 4th May and were disembarked on 15th May 1831. Convict indents include name, age, education, religion, family, native place, trade, offence, where and when convicted, prior convictions, physical description, where and to whom assigned as well as various notes regarding colonial sentences, relatives already in the colony, tickets of leave, deaths etc. [4]

While many convicts settled down and created a better life in their new country, there were those who never accepted their fate.....

One very faint note in the indents refers to Robert Callaghan who was only sixteen years old when he was sentenced to 7 years transportation for stealing lace. Having been in and out of trouble for the next few years he was eventually transported to Van Diemen's Land in 1846. One year later with several other men he escaped from Gabo Island in a whale boat. Although water police were sent in pursuit, none of the escapees were ever heard from again.

There were at least twenty young men under the age of 16 on the Waterloo. Most had been pick pockets. In general, many of the crimes of the prisoners of the Waterloo could be considered petty. - pig stealing, sheep stealing, vagrancy, stealing money, clothes and shoes. etc. Thomas Barnes was only 16 when he was transported for picking pockets. Amongst the bound manuscript convict indents is a poignant letter from Thomas' brother Michael written in 1844, fourteen years after Thomas was first convicted.

My Dear Brother, There is nothing surprises me more than your neglect in giving me the satisfaction of a letter from your own hand. I have sent several letters but get no information but what I got from the Colonial Office in London........

- however by this time Thomas had lived a life more horrific than either of them could ever have imagined as young boys growing up in Ireland, and it is not surprising that no letters home were sent in these years. All that he had known at home was lost to him when he stepped on board the Essex Hulk on 8th December 1830. Six years later in New South Wales when he was 22 he teamed up with another man and together they began committing robberies. He was captured, convicted of burglary and sent to the most dreaded of penal settlements, Norfolk Island. Joseph Anderson was Commandant at Norfolk Island in 1837. Thomas survived the ordeal and although he was sent to Newcastle gaol several times over the next few years, he was later granted a Certificate of Freedom just one year before his brother Michael sent the above letter. No trace of Thomas could be found at that time by the authorities.

One of Australia's most infamous convicts James Hardy Vaux was transported to Australia three times over a period of thirty years. He first arrived in Australia on the convict ship Minorca in 1801, having been sentenced to 7 years transportation at the Old Bailey for stealing a handkerchief. He returned to England and was again sentenced to transportation after stealing from a jeweller's shop. He arrived on the convict ship Indian in 1810. He absconded once again and in 1830 was convicted in Ireland of passing forged bank notes. This time he was transported on the Waterloo. By this time he had a ruddy complexion, brown hair and sunken hazel eyes. His return was remarked on in the news....Hardy Vaux appeared quite at home, only the sharp movement of the muscles of his phiz, showed he was not quite at ease with himself.[5]

1). Convict Patrick Cassidy from Dublin was executed at Newcastle in 1835 for attacking his overseer Hugh McIntyre.

2). William Trotman was also employed as surgeon on the Claudine in 1829

3). William Murphy and Thomas Wintersgale were indicted for stealing from the person of Thomas Babbington Esq., a pocket book containing a bank of Ireland note for 20l, one for 10l, 1 forged note for thirty shillings and divers other small notes and bills of exchange to the amount of 300l.......The Jury returned a verdict of Not Guilty against Wintersgale and of Guilty against Murphy, who was subsequently sentenced to transportation for life. Murphy exclaimed 'For Life - who ever hear of transportation for life for a felony like this'. Baron Pennefeather replied - Until within the last two years, the felony of which you have been convicted was a capital one, and, but for a recent statute, was one for which your life would have been forfeited. - Freeman's Journal 8 July 1830.

4). Belfast Quarter Sessions - Joseph Henry, for stealing on 2nd May last, at Belfast a hatchet the property of William McClure. Guilty; 7 years transportation. The prisoner a youth only 15 years off age had been five times tried at the Sessions - Belfast Newsletter 30 July 1830

5). Slodden Castle appointed to be Deputy-Assistant-Commissary-General in 1829. The London Gazette

6). Find out more about D.A.C.G. William Looker/Sooker at Design and Art Australia Online

7). The convict ship Waterloo under Captain Henry Agar and surgeon Henry Kelsall was wrecked at Table Bay in 1842 while on the voyage from Sheerness to Tasmania.

8). Certificate of Freedom of Francis Neill