Adamstown was established in 1869 between the Borehole and New Lambton where Thomas Adams of Blane Street, Newcastle purchased 54 acres of Crown land. He planned to subdivide the land into small allotments to be sold at reasonable rates so as to encourage settlement however the land was sold to Thomas and Henry Bryant who later subdivided it.

Described in the Newcastle Directory 1881 as a village about four miles from Newcastle, Adamstown could boast a stately Public School, Mechanics' Institute and Assembly Rooms where concerts etc were held. There were three hotels, four general stores and one place of worship to cater to the population of 400 - mainly coal miners and their families. The public school had an enrolment of 250 pupils The schoolmaster was Mr. R. McCredie with Miss Conolly the assistant.

The Newcastle Primitive Methodist Church established a church in Adamstown in 1874. Cornelius Decker commenced a Sunday School in May.

In 1884 the residents of Adamstown petitioned that their locality be created into a Municipality under the name of the Borough of Adamstown. The proposed area was two square miles and the population was about 1000. The area was described as 'commencing at the south-west corner of the Hamilton Municipality; thence east 24 chains 66 links; thence south to the south east corner of Thomas Adams' 54 acre block; thence west to the south west corner of the aforesaid Thomas Adams' 54 acres block; thence south one and a quarter mile to the south-east corner of Stephen Foyle's 320 acre block; thence west half mile; thence north about wo miles thirty chains, joining Lambton municipal southern boundary; thence east joining Waratah southern boundary, also the Hamilton municipal western boundary, to the point of commencement. The Petition was signed by more than 150 Adamstown, Commonage, Wickham and Glebe residents and was published in the New South Government Gazette on 21 January 1884. Select here to find the list of Petitioners


By 1891 the population of Adamstown had reached 2,030 and ten years later in 1901 the population had increased sufficiently to support communication with the city of Newcastle by rail, tramway and omnibus. A large public hall had been constructed as well as three churches, fire brigade, Council Chambers and a brick works - a popular spot for local children to fish for yabbies.

Soccer was a popular sport in Adamstown and many of the town's sons went on to represent Australia as Soccer internationals. The first meeting was held in a cricket shed at Adamstown Park on Monday 12 July, 1889. A further meeting was held on 21st August 1889 when the decision was made to name the club Adamstown Rosebuds. The first colours were - White shirt, blue sash and dark trousers of knee length. The 1925 squad won the State Championship - the Gardiner Cup - and helped move the balance of power in NSW soccer to the north. Seven members of that team were selected to play in the northern representative team against the touring English professionals that year. 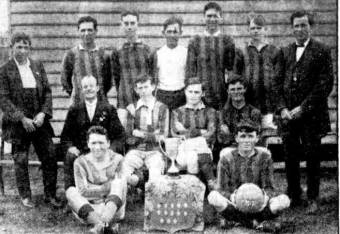 Adamstown originally was part of the Newcastle Primitive Methodist Circuit, which began with the formation of a society in 1852. The beginning of the work in Adamstown came with the starting of a Sunday School there by Cornelius Decker in May 1874. About three months later Rev. Samuel Gilby, the second minister of the Newcastle circuit, conducted the first service in the open air beside a turpentine log. At the quarterly meeting, on June 1 1874, Adamstown is first officially mentioned in a brief minute, 'That Adamstown came on to the plan'.
Much of the land on which the suburb now built was commonage. The church, like many of the residents, 'sat down' on the land, depending on the Governmental promise that the common would be sub divided and sold.

A little wooden church was first erected on the site now occupied by the Public School, financed by an arrangement with Richard Hall. When the Education Department required a site, it built a school close to the little church and told the Methodists to move to the opposite vacant corner. There was no alternative but to obey, and they removed their church bodily to the site of the Jubilee Church. In July, 1879, an addition was made to the building.

Expansion necessitated a larger church, and in 1884 the present Sunday School Hall was erected. This was a venture of faith, for the scheme cost 700 pounds, and there was still no title of the land. It was not until October 30, 1890 after 12 years had elapsed, and after strong efforts to dispossess them were made, that those pioneers had the land legally secured to them.

In 1892 the Charlestown circuit was formed, with Rev. James Green as first minister.

The saddest experience through which these circuits passed was the Dudley colliery disaster, on March 21 1898, when 15 lives were lost. Most of the men were Methodists, chiefly from the Charlestown circuit, but the disaster took from Adamstown its 'grand old man, ' Thomas Hetherington.

With the coming of Methodist Union in 1902, Adamstown was formed into a circuit comprising Adamstown, Cardiff, Charlestown, Dudley, Redhead and Belmont with Rev. John Calvert as first minister. The immediate need was a parsonage. The people rallied to the project and on July 10 1902, only three months after the minister's arrival, a contract for 500 pounds was signed.

A further step was taken when Rev. Alex Stephen initiated a scheme for a modern brick Church. Year by year funds were raised for the purpose, and in 1914 the scheme was about to be launched when the World War intervened. The proposal was delayed until 1824. Then a tender for 5000 pounds was accepted, and the foundation stone laid on May 17. The Jubilee church was opened and dedicated by the President of the conference, Rev. J.C. Hill, On November 15, in Rev. C. J. MacAulay's second term.

The circuit was divided to form the Charlestown circuit in 1925.

In its present activities the church maintains its tradition as a live spiritual agency. The young people are served by Intermediate and Junior C. E. Societies, Senior and Junior Knights and M.G.C. and Ryas. The Intermediate C. E. usually forms the morning choir. A strong Ladies' Church Aid is functioning also a Ladies' Auxiliary to Overseas Missions and a War Comforts Society.

Outside preaching places are Kahibah and Kotara. At the latter services are held in a private house - that of Mr. J. Davies, Gregory Parade. The N.S.W. Development Committee has undertaken the building of a church there as soon as preliminaries permit. A site to serve Kotara and Orchardtown has been secured.

Kahibah church was built by voluntary labour when Rev. Charles Viney was at Charlestown. 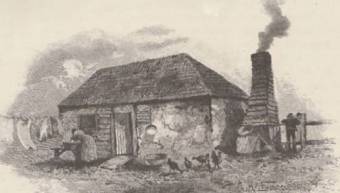 Glory Be 1845- 1945 - Commemorating the 100th Anniversary of the opening of the First Wesleyan Chapel in Newcastle. Camden Theological Library