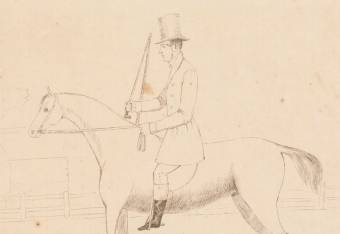 He had an extraordinary rise to success in the twenty-two years he lived in the Hunter Valley region. He became the owner of a livery stable in West Maitland and also began a coaching service in the town. He was licencee for the Albion Inn in 1842. In 1847 he moved to larger premises - The Fitzroy Hotel. In 1847 the Stores of Isaac Beckett were situated opposite the hotel.

A ball and supper to celebrate his moving to the Fitzroy were held 'on a first rate scale' on a Wednesday evening in July of that year. Over one hundred guests attended. The ball room was tastefully decorated with festoons of boughs, flowers, and fruit. The supper table was spread in a style that had seldom been equalled in the district. A good band was in attendance and dancing was kept up with unabated spirit till nearly seven o'clock on Thursday morning; the greatest harmony and good feeling was said to have prevailed the whole night[1].

In 1849, Mr. Quinn the Australian Tight Rope Dancer kept Fitzroy Hotel patrons amused when he performed in the yard of the Fitzroy while awaiting the procurement of suitable tackle to perform the feat of crossing the Hunter River.

In November 1849, Henry Reeves announced he was retiring from business and advertised to sell his stock, carriages and furniture. Also at this time he advertised to sell a parcel of land that was part of an original grant to Mary Hunt (Molly Morgan) situated near the Racecourse, West Maitland.

The Licence for the Fitzroy Hotel was transferred from Henry Reeves to Isaac Gorrick [2].

In May 1851 Isaac Gorrick joined with Morris Magney from the Caledonia Hotel in Newcastle to run a daily coach between Maitland and Newcastle.