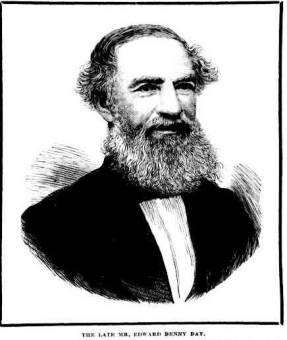 A forlorn sandstone headstone, toppled and in poor condition in St. Peter's Burial Ground, East Maitland, marks the last resting place of legendary Police Magistrate Edward Denny Day, who was known throughout the district for his courage, integrity and persistent pursuit of justice

Born in County Kerry, Ireland in 1801, Edward Denny Day served in the British army and was appointed Ensign in the 46th regt., on 22nd September 1826. He served with the 46th until appointed Lieutenant in 62nd regiment in 133. He served until 1834 before leaving the army for medical reasons.

In Australia in 1836 he became a Police Magistrate and married Margaret Raymond. The couple were to have eleven children together.

Magistrate in the Hunter Valley

In October 1837 Captain Day was appointed to Muswellbrook where in June 1838 he led a party to apprehend the murderers of 28 aborigines who had been slain at Myall Creek.

I received information on Sunday evening of 20 of a party of bushrangers being out and took steps to collect a party of men to go in pursuit. I started about seven next morning. I had ten mounted men and a black boy. I took the direction of Scone, and passed through it. I continued in pursuit until six that evening. I came up about fifty miles from Muswellbrook with the bushrangers, at a place called Doughboy Hollow. About half a mile off the road we saw some drays encamped and some smoke; there were some horses tethered and some men in their shirt-sleeves making a rush for the opposite side of the gully where the encampment was. I saw about six or seven. We galloped in amongst them; a great many shots were fired on both sides. I can speak positively to Davis having fired at me. Davis rushed from the gully, evidently to get behind a tree; whilst he was running I fired; he turned and fired at me. I was not more than twenty yards from him, he then ran towards a tree, and resting the gun in the fork of the tree, fired at me through the branches. I returned the shot, and wounded him in the shoulder. Five prisoners were taken in less than five minutes after we charged them. Shea, Marshall, Emerett, Davis and Chitty were the men; they had arms; there were ten or 11 guns and a great many pistols and seven horses.

Edward Denny Day was fearless and uncompromising in his pursuit of outlaws. Even on the eve of his departure from the district, he immediately organised and took part in the pursuit of two bushrangers Davidson and Smith who had made a daring escape from the new Maitland Gaol.

Shortly after the announcement a number of residents resolved to commence a public subscription to present Mr. Day with a testimonial of respect and esteem for the 'intrepid exertions and meritorious conduct and other services' he had rendered to Maitland and the district. A well attended meeting was held in the court house on the 4th October 1849. The Rev. Dean Lynch moved the first resolution at the meeting after a short speech in which he reminded those present that Mr. Day had devoted his time and intelligence and risked a life valuable to his family in the performance of his duty and for the good of the community. Those in Maitland who had enjoyed the happiness of living in peace and quiet did right to come forward and acknowledge they owed these blessings in great measure to the energy and vigilance of Mr. Day. Rev. Lynch wished to thank not only Mr. Day but Mrs. Day for their work at the
Maitland Hospital.

William Lipscomb seconded the Rev. Lynch's resolution stating that he did so with mingled feeling of regret and pleasure; of regret for the loss of Mr. Day and of pleasure in meeting others assembled there to do him honor. He had known Mr. Day for thirteen years and had always known him a disinterested, upright, magistrate. In the Courthouse Mr. Lipscomb could bear testimony to Mr. Day's impartiality and integrity on the bench. In political matters he felt that Mr. Day had never allowed himself to be mixed up with any party.

Cyrus Matthew Doyle moved the second resolution stating that he regretted the loss of Mr. Day to the community. He felt the government had made a wise selection in nominating Mr. Day to fill a higher situation; it gave him great pleasure to hear of the appointment but greater pleasure to bear testimony to Mr. Day's long services, which rendered him worthy of being called the greatest friend Maitland ever had.

Bank Manager Mr. Saunders made the third resolution stating that he could testify to Mr. Day's courtesy both in his public and private character. He thought the people did well to make the testimonial although they were not so rich as they were in years past due to the depression or the fund would have been much greater.

Mr. Peter Green thought the district had lost services of the greatest importance to it for there was not a more upright, just and impartial magistrate than Mr. Day. 'It must be obvious to all, and particularly to those who had lived sufficiently long in the district to be aware of its former state, that they were greatly indebted to Mr. Day for his vigilant performance of his duty.'; It was well known that Mr. Day had not hesitated to risk his life in the course of duty.

The gentlemen appointed by the last resolution as a deputation proceeded to Government Cottage to the residence of Mr. Day and read the resolutions which had been passed and presented Mr. Day with a purse containing the sum raised as a testimonial.

Subscriptions amounting to 130 sovereigns had been raised and it was proposed that Mr. Day could purchase a piece of plate to suit his own taste and convenience. It was to be inscribed 'Presented by the inhabitants of the district of Maitland, New South Wales, and its vicinity, to E. D. Day, Esq., who for upwards of twelve years held the appointment of Police Magistrate of that district, gaining the respect and admiration of all classes of the community'.

Over 100 residents of the district subscribed for the testimonial to Mr. Day.

'There could be no higher gratification to a public officer than the approbation of the people amidst whom he had performed his duty. The most simple expression of this approbation, coming from the people would have been sufficient for him; and indeed he considered himself most happy in having for so many years lived among those who had on several occasions testified their approbation of his conduct. But the people of Maitland had done more, they had given him a proof of esteem which his children would inherit and hold as a inducement for their future guidance. He need not say with what regret he left them; nothing indeed would have induced him to have removed but that there was an uncertainty whether the office he had so long filled would be continued. He felt deeply grateful this additional proof of the partiality with which they had regarded his services more so than he could find words to express, and he again begged to thank them, one and all, and through them the subscribers.

By early October the family were ready to move and it was announced that a sale would take place at 11am on 8th October at Government Cottage East Maitland. To be sold on the day was a quantity of 'splendid and useful household furniture' as well as a first rate second hand Stanhope gig, a superior second hand set of gig Harness in good style, a splendid cob, a first rate and handsome pony in foal, two superior cows very docile, two excellent carts, one good water cart etc. Mr. Ledsam the auctioneer was instructed to sell without the least reserve as Mr. Day was on the eve of his departure for Sydney. Later a Whirligig and toy horse were added to the list.

Most residents considered Day's conduct on the bench had been marked by a strong desire to administer the law uprightly, impartially and strictly. Many thought his vigilance and energy in the management of the police has afforded general security and his zeal and ability in the discharge of his functions had kept the district in a well ordered state.

The day following the meeting Mr. Day and his family boarded the Rose steamer for Sydney. A good muster of inhabitants of Maitland on horseback and in gigs, proceeded to Morpeth, and three hearty cheers were given as the party went on board, Captain Pattison replying by discharges from his cannon.

Calls for a Medal to be Struck in his Honour

Twenty-five years later Day was approaching the end of his life but his deeds and achievements lived on. Edward Close (jun.,) wrote to the Maitland Mercury recalling the old Police Magistrate's pursuit of justice and suggesting a medal be struck in his honour. -

Better Late Than Never - To the Editor of the Maitland Mercury.-

Sir-
Seeing in the Sydney Morning Herald of 2nd inst that there has been an issue of several gold and silver medals in recognition of acts of bravery displayed by the recipients in conflict with bushrangers during the years 1863, 1864, and 1866 I think it but just to state that in the opinion of many this reward should still be retrospective, even to a date as far back as 1840, for there is a man now living among us whose claims for reward are far greater than any of those to whom medals have been awarded.

I allude to our old, valued and respected -P M, Mr E D Day, to whom, and those who served with him at Doughboy Hollow, on the 21stDec, 1840, the credit was due of ridding this district of one of the strongest and most determined gangs of bushrangers ever known in this colony. What Mr Day did was done entirely from sense of duty, and leaving his own district, he followed the Jew boy Gang into that of another P M, and captured there and then five out of eight desperados, and afterwards brought the whole gang to that punishment due to murder and rapine. For many years after little was heard of bushranging.

The Sydney Morning Herald dated 31st December, 1840, referring to this matter and quoting a correspondent, says

Fortunate indeed are we to possess one magistrate on the Hunter, who has judgment to guide him, and courage to act in time of need 'I am aware that justice is often tardy in such cases as this, as I know to be the fact in the issue of medals to the officers and soldiers of the Peninsular war, but when they came, though after a lapse of about thirty years, they were nevertheless appreciated and worn with pride and honour by the recipients. And I have no doubt, the old and tried friend of this district, that even though he may obtain but may never wear his medal, he would feel proud to hand it to his children and say. This I have long since bravely earned. It was given me by Her Majesty's Government here, that I have so long and faithfully served. I feel satisfied there are few men in this district who would not rejoice to see Mr Day and those who served with him on the occasion above referred to reap the reward due to their pluck, and I trust the Government, thus reminded, will take the matter into consideration, 9th Dec, 1875.

Edward Denny Day died in Maitland in May 1876.

The Under Sheriff, Sydney