Henry Gooch was born about 1809. He arrived in Port Jackson on the Orissa from London via Hobart on 20th January 1836. He gave his occupation as settler in the shipping records. [8]

In March 1836 the Sydney Gazette reported -

Mr. Henry Gooch, recently arrived from England, has engaged a number of licensed drays, which are to be stationed regularly at the King's Wharf, and worked under his own immediate superintendence, thereby affording security against imposition too often and too much practised by ordinary carriers, and creating a spirit of creditable competition in that line. [1]

He established his business from Sussex Street. Some of the goods were conveyed from the wharfs at Darling Harbour to Mr. Tooth's stores in O'Connell Street, Sydney. He maintained a connection with Tooth's and Co until the end of his life.

He doesn't appear to have lived on this land at the Williams River.

By the 1840s he had moved to Maitland where he established a liquor store and was an agent for Tooth's ale. This store was probably in East Maitland near Mayo's Wine Vaults. He was one of several spirit merchants in Maitland in 1849/ 1850, the others being William Lipscomb, Benjamin Nelson, David and James Dickson, James Solomon, Isaac Beckett, David Cohen, R.H. Paulovich, Samuel Dickson, Austin and Co., William Wade, Edward and William Ogg, Peek and Calvert, Lawrence Potts, D. H. Stonham ,C.S. Pitt, James Taylor, Alfred Levien, Arthur Cox and Patrick O'Keefe. [5]

In 1861 he employed William Furlong and his wife as general servants. William Furlong was charged under the Masters and Servants Act by Henry Gooch junior when he became drunk and was unable to drive their dray home. [6]

Henry Gooch died aged 53 years on 24th March 1862 at the residence of his son in East Maitland [3]. His son Henry was sole Executor of his Will.

In November 1862 Messrs R. F. Tooth and Co announced that they had appointed Mr. William Petherbridge to be Agent in Maitland as Mr. Henry Gooch was leaving the district [7]. 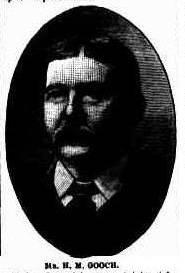 Henry Mansfield Gooch was born in Sydney in 1839 and educated at King's school, Parramatta, and at the Grammar school, Maitland. In 1855 he went overland to Victoria with a mob of horses from the borders of New South Wales and Queensland, selling them at the Bendigo diggings, and in 1865 made another trip with cattle, the mob containing the unusual number of 2,000 head. He remained in Victoria, joining the firm of Knight Bros, of the Australian Wine Company, to which he succeeded in 1869.(The Prahran Telegraph). He was appointed Magistrate in 1892. (Government Gazette). He was Mayor of Prahan, Melbourne in 1889 - 1901 (Wikipedia) Henry Mansfield Gooch died in 1905 and was buried at the St. Kilda Cemetery. (Australian Cemeteries)