Use the Search Box above to find your Hunter Valley Ancestor.
Walter Scott was born on 15 October 1787 and attended Edinburgh University as a medical student after completing his apprenticeship as surgeon.

He arrived in Van Diemen's Land as surgeon superintendent on the Regalia in 1823. [2]

By May 1823 Walter Scott had been granted 600 acres of land by Governor Brisbane, and after travelling to the area, selected 600 acres at Paterson Plains across the river from the grant of George Lang. He named the grant Wallalong (Wollalaghn) and built a cottage on the land. 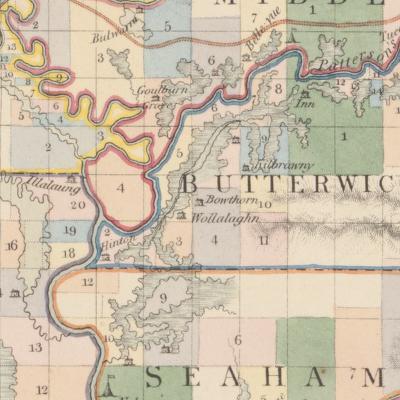 Many years later a correspondent to the Maitland Mercury described the fate of some of the natives who resided on this land.......

They suffered a good deal of injustice at the hands of some of the first settlers, and there is now living a man who was present, as he admitted, when a party had formed for the purpose of punishing the blacks for pulling the cobs of maize in the field, and carrying it off in their nets to their camps. Observing some smoke rising from the midst of the Wallalong bush, they armed themselves with muskets, and reached unobserved the camp, where a considerable number of men, women, and children were. They fired upon them, killing some and wounding others. The rest fled through the bush, pursued by the whites, and the whole of the natives took to the water intervening between the brush and the highland, towards which it gradually deepened, and some of the poor creatures were drowned. My informant now a very old man, while expressing regret at the occurrence, said the worst part of the whole was, they afterwards discovered, that not one of those who were "wanted" were among them. The haymakers in the Wallalong fields have little suspected the occurrence of these tragical happenings on the exact spots where they have stood when engaged in their peaceful occupation. [1]

Scott may not have spent a great deal of time at Wallalong in the early years. He may have used assigned servants (convicts) to clear and fence the land and grow crops as he was employed at Newcastle as Commissariat clerk and storeman. He probably worked in the government cottage set aside for the Commissariat clerk. This cottage was situated nearby the Parsonage not very far from the hospital. (See Armstrong's 1830 map of Newcastle)

In September 1824 Walter Scott joined the expedition to Moreton Bay where a settlement was to be established. Others on the expedition included Lieutenant Henry Miller of the 40th regiment, botanist Allan Cunningham, surveyor Robert Hoddle, 14 soldiers, 29 convicts.

The first settlement, established near Redcliffe, was soon abandoned and the site where Brisbane now stands was selected due to the reliable source of water. Here barracks for soldiers and convicts, huts, sawpit, kiln and blacksmith's forge were established. There was also an army store which Dr. Scott probably controlled.

Walter Scott worked as surgeon until Henry Cowper who had been formerly appointed surgeon, arrived in 1826. By 1828, Dr. Scott had returned to the the Hunter district and he was once more working at Newcastle as Commissary Clerk.

He purchased more land - 720 acres in 1836 and 640 acres at Seaham in 1839 which he named Eskdale. He had the usual problems with convicts as two of his assigned servants William Amos and Thomas Cartwright absconded from service (at Paterson) in the winter of 1834.

His nephew - also Walter - emigrated from Scotland in the 1840's and settled on the Seaham land (Eskdale). He managed his uncle's estates for him, acting as agent.

THE LATE DR. SCOTT.- It has seldom fallen to our lot to have to record the decease of one so universally respected and esteemed as Dr. Walter Scott, of Eskdale, a notice of whose death appeared in our obituary on Wednesday. For some years past he had been suffering from chronic disease, and had deemed it advisable to take a trip to his native country, thereby, if possible, to recruit his failing health. He accordingly left the colony in the early part of last year for Britain, but unfortunately his constitution was too much shattered to sustain any benefit from the change, and after lingering for a few months he expired in London on the 10th October.

The many spirited public services rendered in times past by the late Dr. Scott, coupled with private acts of kindness liberally bestowed, have secured for him a reputation which will be long ere it is effaced from the remembrance of the older inhabitants of this district, and his loss will be long felt by those who came within the sphere of his unostentatious benevolence. Although essentially one of those few mild and good men who 'did good by stealth and blushed to find it fame', he was nevertheless active and energetic in denouncing what he conceived to be public abuses; and perhaps no better proof can be found of the sincerity of his motives, and the discretion of his views, than the fact of his having, during a public career of more than thirty years, mixed up in many public movements, at the same time making fewer enemies than perhaps any other man in the district.

Apart from political and local questions, his exertions in developing the agricultural re- sources of the colony must be within the recollection of many. Besides importing new machinery adapted for colonial agriculture, he turned his attention to the locating of a virtuous and respectable tenantry on his estates, carefully studying their comforts, and thus extending the benign influence which the example of his private life contributed to shed abroad in the circle in which he moved. Exemplary alike as a just and impartial magistrate, a kind and indulgent landlord, and a good master, his name will be long remembered by the people of this district as being associated with all that is estimable.