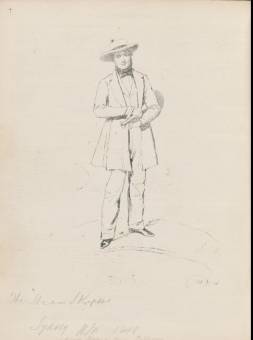 He arrived in Australia in 1837 and was engaged on ships sailing out of Sydney Harbour until 1840 when he was placed in command of the Rose steamer. He resided in Morpeth in a four-roomed cottage near the steamer wharf.

Robert Lorn Pattison was granted a publican's license for the Caledonia Hotel in Newcastle in 1853.

He died in 1877 two years after being hit by a coal train in Blane street Newcastle. His courage in saving lives over many years was reported in newspapers throughout the colony. .........

On Wednesday afternoon (the Newcastle Herald states) a veteran seaman, well known in Newcastle for his deeds of bravery in saving life, died at the ripe ago of 70 years Captain Robert Lorn Pattison arrived in the colonies about forty five years ago, and resided for many years in Morpeth and Sydney, and afterwards in Newcastle.

He was for twenty five years a captain in the A S N Company's service, during the greater part of which he commanded the Rose, and was also for a short time with the 2nd R N S N Company. His death occurred at his residence in Sydney street, and is attributed to injuries received by him at the crossing in Blane street, Newcastle some two years since, when he was knocked down by a coal tram, and since when he had been confined to his bed. 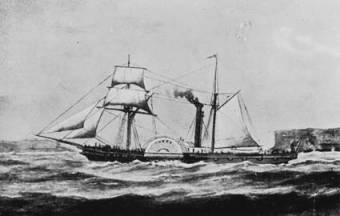 
Captain Pattison's renown in saving lives was well known, and the following particulars will prove interesting to the friends who will mourn his loss -

In the year 1826 he saved a lad from drowning, who fell into Leith Harbour.

He jumped over board and saved a lady in Leith, who fell from the gangway in leaving the steamboat.

He saved the life of Mr Samuel Bailey, of East Maitland, who was knocked overboard from the steamer Victoria by a heavy sea off Nobby's, and was guided to him by the seagulls hovering over him as he was floating in the water.

In 1842 he saved a man named Warter, who jumped over board from the Rose, steamboat, twenty two miles from Sydney.

In 1843, with others, saved ten hands from a schooner at sea. She was run over in a dense fog by the steamer Rose.

In 1842, he saved the life of Mr Pitt, of East Maitland, who fell from the gangway of the Rose, when leaving the wharf.

In 1843, saved the Rev. Mr Bolton from drowning, who also fell from the gangway.

In 1846, with others, saved the crew of the Paterson Packet, which capsized in a heavy thunderstorm off Broken Bay.

In 1853, the brig Dover went on shore on the Oyster Bank at Newcastle. The lifeboat went to her assistance, but got swamped. Pattison then swam through the surf with a line, and succeeded in getting all hands, including the lifeboat crew, on shore, with the exception of one man named Long Dick, who was drowned.

In 1854, saved the life of a man named Lanagan, who fell into the river from the Ben Bolt.

In 1858 saved the life of Mr O'Brien, who fell from the gangway of the Paterson steamboat

In 1837, a man named McDonald fell into the hold of the ship Strathilsa, then under fumigation for the destruction of rats. Pattison, no one else being willing to incur the risk, went into the hold with the intention of rescuing McDonald, and very nearly lost his own life, was insensible on getting out; McDonald was afterwards taken out dead.

In 1859 saved Mrs Sutcliffe, who fell from the Sophia Jane, at Morpeth She was five minutes in the water before being rescued ......