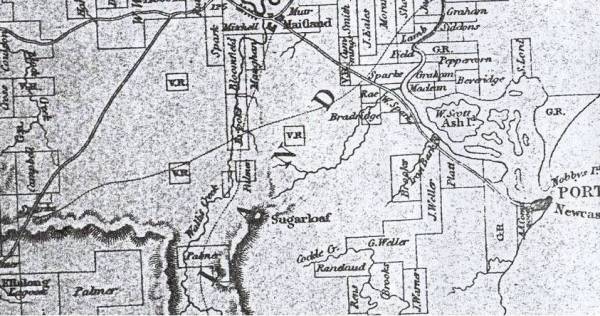 Richmond Vale was a grant to Lieut. John Palmer of the 2nd Ceylon Regiment.

According to Henry Dangar's 1828 Map and Index, Lieut. Palmer was granted 300 acres of land in the Parish of Stockrington on 4th September 1823.

An additional six hundred and forty acres of land was reserved at Mulbring under Governor Brisbane's authority on 17 May 1825 - This land was drescribed as commencing at the North West corner of John Sparke's twelve hundred and eighty acre farm [3} This land may have been once known as Ennindale.

John Palmer senior (b. 1760) entered the navy as a captain's servant aged nine. During the American war of independence he was serving in H.M.S. Richmond which was captured off Chesapeake Bay by a French squadron on 11 September 1781. In 1783, after his release as a prisoner of war, he married Susan Stilwell daughter of an American loyalist family.

John Palmer senior came to Australia as purser of the Sirius with the First Fleet in 1788. He remained in Australia until 1796.

Lieutenant John Palmer (b. 1797) joined the 2nd Ceylon Regiment which was disbanded in 1822. He arrived back in the colony on the Heroine in September 1822. Among the many passengers on that voyage were Miss Jane Wylde and Miss Wylde, daughters of Judge Advocate John Wylde.(8)

Lieut. John Palmer was residing at his father's house Waddon Cottage when he applied for a grant of land in December 1822 -

9 December 1822
Sir,
I do myself the honor to state to Your Excellency that in consequence of the reduction of the Corps I belonged to the 2nd Ceylon Regiment, I was placed on half pay and that His Royal Highness the Commander in Chief was pleased to obtain for me His Majesty's permission to reside in this colony with my friends until my services might again be required. As it is now my wish to devote my time to Agricultural pursuits and having in possession a number of stock as per margin (100 head of cattle; 370 sheep; 3 horses) being the produce of some given me when I was a child, I trust your Excellency will be pleased to further my views by granting me such a portion of land as you may deem proper.
I have the Honor to be Sir
Your Excellency's Most humble servant
John Palmer
2nd Lieutenant, 2 Ceylon Regt., [2]

He was granted 300 acres of land in the Parish of Stockrington on 4th September 1823.

In August 1824 two convicts John Roberts and Bryan Jordan were permitted to pass through from Windsor to John Palmer's farm with 300 head of cattle. He was granted victualling from the Stores at Newcastle for himself and his four assigned convicts - John Roberts, Bryan Jordan, George Savage and John Holland.

In the 1828 Census taken in November, Lieutenant John Palmer was listed as a farmer and grazier of Richmond Vale, Wallis Plains. Harriett Venner Wylde age 22, daughter of Judge-Advocate John Wylde who first arrived on the Elizabeth in 1816, was still residing with her mother at Cabramatta. John Palmer and Harriet Venner Wylde married on 13 November 1828 at St Luke's Church Liverpool. They resided at Richmond Vale. Their daughter Susan Stilwell Palmer was baptised there by Rev. Frederick Wilkinson on his visit to the estate in 1831[9].

Convicts assigned to Lieutenant John Palmer who may have worked at Richmond Vale included:

George T. Palmer and wife, Miss Palmer and the Masters Palmer, Miss Lewis, governess and a servant departed on the Eweretta for London [5]

(1) See Map of the Hunter River - J. Cross for location of Stockrington parish. Index to the Map - University of Newcastle Flickr

(2) In the court case R. V. Boatman and Billy Bulleye - Decisions of the Superior Court of New South Wales the estate owned by John Palmer was Ennindale at Sugarloaf.

(3). {Extract} Memorandum - The half pay of the under mentioned Officers has been cancelled from 27th instant, inclusive, upon their receiving a commutation allowance for their commissions: Second Lieutenant John Palmer, half pay 2d Ceylon Regiment - London Gazette 1830.

7) Judge Advocate John Wylde departed on the Mangles in 1825

8). Richmond Vale was offered for sale in 1847 - 680 acres ten miles from Maitland upon which are erected a very compact cottage, barn, stockyard, nearly all fenced in. - Sydney Herald 8 May 1847. In 1851 Frederick Nainby advertised for sale...that beautiful homestead and dairy farm known as Richmond Vale situated about 8 miles from Maitland upon which was a neat and commodious cottage, men's huts, stockyards, out buildings, cultivation paddocks etc., Described as the best watered farm within 100 miles of Maitland having an extensive Lagoon, besides nearly a mile of Wallis Creek running through it.