The Wool Industry in Kilkenny

In 1810 a woollen mill known as the Merino Factory, was commenced by Timothy Nowlan and Thomas Shaw beside the Kings River, Kilkenny on the lands of a Mr John Prim who had died some time previously leaving as trustees of his will Timothy Nowlan (his brother-in-law) and Thomas Shaw (his nephew). The factory prospered and gave good employment for about 12 years until 1822 when the firm was bankrupt and the Factory was closed. The Nowlans and Shaws were closely related as both Timothy Nowlan and George Shaw married two Prim sisters and Thomas Shaw Junior also married a cousin Elizabeth Prim.[1]

Select here to read 'Sketches of the Merino Factory, Descriptive of It's Origin and Progress and System of Discipline and Moral Government'

Having been allowed a free government passage for himself and family, Timothy Nowlan arrived in Australia aboard the Mangles on 8 November 1822. He was accompanied by his wife Eliza, son John, servant Edward Kealey who was a shepherd, and six other servants.

His government passage was to Van Diemen's Land where he wished to establish a sheep run however by March 1823 he had decided to transfer to the Newcastle region.

Requests were made to the Government for servants, and a carpenter and constable were assigned to accompany his sheep to Newcastle. Timothy, Eliza and John Nowlan together with servants including Patrick Byrne who had been assigned to Nowlan in April 1823, came to Newcastle on the Elizabeth Henrietta later that year. A sheep run was established on his grant which he named 'Hunter's Hill' (later renamed 'Eelah' by his son John).

Timothy Nowlan received 244 ewes from the government herd and rations for his family and servants. By 1828 Nowlan was in possession of over 6,000 acres of land.

Location of grant can be seen centre left on the map below:

The following article explains how he came to be so favoured by Government.......

Once Upon a Time - Our Woollen Story

Somehow Australian history almost has lost sight of a romantic importation of sheep to Australia in 1822 by Timothy Nowlan, a sheep-farmer and woollen manufacturer of Kilkenny, in Ireland. Nowlan and his partner had been ruined by the influx of very cheap woollen goods to England, when the long-standing embargo was lifted after the conclusion of the long and many wars of the period.

He had been a manufacturer on a large scale for the British Government, and received much sympathy from Earl Bathurst, a member of the Cabinet, who obtained free passage for him, his family and their servants inclusive of wool sorters and shepherds, to Van Diemen's Land (Tasmania), and directed that the Governor should give him a large grant of land, with a reserved tract adjoining, so that he might breed sheep of good merino quality and increase his flocks as opportunity offered. Nowlan received the land grant accordingly, but shortly transferred from the southern island to the mainland. Before leaving Van Diemen's Land he sold some of his sheep, which were the first from which flocks were bred on that island, the pedigree strain remaining to this day.

In New South Wales he was given another large land grant on the Hunter River, but this area proved unsuitable for sheep, and later he imported Hereford cattle, and became the first big Hereford stock man in Australia. Macarthur paid him a high price for the remainder of his sheep, which were reputed to be the pick of the Camden flocks. There was. not much quality in the sheep Macarthur brought from the King ; his later importations were better, but Nowlan knew more about wool before he left Ireland than Macarthur ever learned wrote an old sheep-man in the sixties. [2]


Convict servants working for Timothy Nowlan during the years 1828 to 1833 included:

William Bowles, a house servant who arrived on the Morley;

Michael Carroll a fencer who arrived on the Mangles in 1822;

Byfield Walmsley a shoemaker who arrived on the Prince Regent;

Kyram Whelan a shepherd who arrived on the Mangles in 1826;

Thomas Shuttleworth a shepherd who arrived on the Henry;

James Bristles on the Dunvegan Castle in 1830;

William Russell a butcher arrived on the Asia 1832 and

James Pickles a wool sorter who arrived on the Mary in 1833.

Thomas Standfield, one of the Tolpuddle Martyrs who arrived on the Surry in 1834 was assigned to Timothy Nowlan. His son John Standfield visited him 3 weeks after being assigned to Nowlan and was appalled by his father's condition...... He was 'a dreadful spectacle, covered in sores from head to foot, and as weak and helpless as a child. After working from sunrise to sunset he then retired to his 'Watch-box' 6 feet high, with a small bed and one blanket, where he could lie and gaze upon the starry heavens, and where the wind blew in at one end and out of the other, with nothing to ward off the pitiless storm - such were the comforts of the watch-box. Besides this he had to walk four miles for his rations, which journeys he was compelled to perform by night.' Notice of an Absolute Pardon for Thomas Standfield and the other Tolpuddle Martyrs was published in the Sydney Gazette in September 1836, however none of the men were notified by the Government or Masters. Fortunately George Loveless read of the Pardon later and notified the men who eventually returned to England.[3]

Timothy Nowlan had an encounter with the Jewboy gang bushrangers in 1840 when he was travelling in company with another man named Waring on the way to Wallarobba. Some accounts relate that he was robbed and mistreated by the bushrangers, others that he received no personal injury at all. Read an account in the Sydney Herald

1). In 1824 Henry Corbyn who had been in the orphan school was apprenticed to Nowlan.

But not to anticipate. We got home to Patterson's Plains to a late dinner, between seven and eight o'clock, tired with sitting so many hours in the saddle, rather than with the distance rode. We unfortunately also made choice, in our impatience for dinner,'of one of those short cuts which almost invariably turn out the longest way round. We soon forgot our fatigues amidst the excellent cheer, and hearty welcome of our worthy host and his amiable lady; and after paying every reasonable respect to his Innishowen, I was glad to get to bed. This is a fine sheep and dairy district. Mr. N. has nearly three thousand sheep, of a highly improved breed; and his neighbour, the magistrate, musters, I believe, about two thousand, all in the finest order. Most of the settlers make a cheese a day, weighing about fifteen pounds. At this rate cheese must come down in price, or be made of such superior quality as to be worth exporting to India and the Isle of France. One settler makes one hundred and fifty pounds of butter per week for the Sydney market; he adopts the plan practised at home, of never letting the calves see their mothers after they are dropped; they are kept in calf-sheds, on the skim-milk and curds, and the cows are brought to the pail twice a day, morning and evening. There is great advantage in this system, and it might be universally adopted where there is plenty of grass. But where is the milkmaid singing olithe?'' Not in New South Wales
- would that she were! Thanks to Mrs. Fry, we have neither dairy-maid nor milk-maid; and until her horrid system is upset, Pat must continue to milk, and Murphy to churn. X. Y. Z. 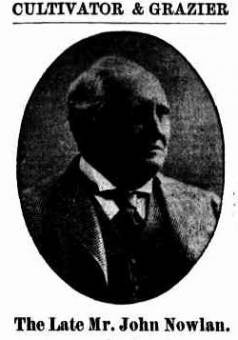 The late Mr. John Nowlan, of Eelah, near West Maitland, was born in Kilkenny, Ireland, 75 years ago, but came to Australia when quite a child. He received his education in Tasmania, and spent some years of his earlier manhood in Victoria, where he held extensive pastoral property. Ile afterwards came to New South Wales and settled in the Hunter River district, and for thirty-eight years re sided at Eelah. Mr. Nowlan was per haps the best known breeder of cattle in the northern district, and at one time was noted as the possessor of the finest pure-breed Hereford herd in Now South Wales. For many years he was a prominent member of the Hunter River Agricultural and Horticultural Association, and a exhibitor of stock. In 1S66 Mr. Nowlan entered Parliament as representative of the old Williams electorate, an enormous area of country with Dungog as its headquarters, and he was ever ready with projects for the furtherance of local interests. Mr. Nowlan, who died a bachelor, was widely esteemed and respected. He was buried in the cemetery of St. Mary's Church, where also lie the remains of his father were also interred  -  The Australian Town and Country Journal 30 March 1895