Alexander Park arrived on the Prince Regent in March 1826. The Sydney Gazette reported the arrival....

Two thousand six hundred and fifty acres were granted to Alexander Park on 8 November 1826. He selected his land at Allynsbrook naming the estate Lewinsbrook. 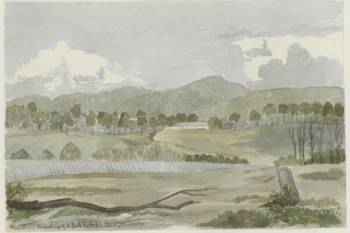 Life as a Settler

Among other crops cotton and probably tobacco were grown. By 1834 Alexander Park along with his neighbour Charles Boydell was on the committee for the Stock Protection Association and in 1836 he was raising funds for a new Church at Paterson. In this year he was granted the title deeds to 848 acres of land.

Park replied to their exhortations in a letter to the Maitland Mercury:

Gentlemen - Allow me to thank you for the honor you have done me, in requesting me to become a Candidate for the Representation of your county, at the ensuing election. I am fully aware, gentlemen, of the responsible duties which so important a trust imposes, and, unless solicited, should not have presented myself as a candidate for your suffrages. I, however, now, in compliance with your request, have the honour to reply, that I shall be most happy to come forward as a candidate, and should I be so fortunate as to be elected, my anxious endeavours shall be to merit the honour which you confer upon me. My political opinions are in favour of the free trade principles now in course of dissemination through the world. I am also of opinion that it is the duty of every state to afford the means of education to the children of the poor I am a Protestant, but at the same time approve of the toleration of all religious sects The new constitution about to be foisted on the colony by Earl Grey I shall oppose to the utmost of my power. Gentlemen, as regards local matters, my interests are identical with your own. I have a large stake in the county and having passed the best park of my life amongst you, cannot but have acquired a fair share of colonial experience during that period. I have the honor to be gentlemen Your obedient servant, Alexander Park, Lewinsbrook.

Alexander Park lost the election to Stuart Donaldson however he was gracious in defeat:-

Gentlemen- Having just learnt the result of the Poll, I hasten to return you my most sincere thanks for the honor you conferred on me, by voting for me at the late Election; and although I have not been successful, yet, under all circumstances, I consider it an honorable defeat. I have the honor to be, gentlemen, your most obedient servant, Alexander Park

'Patterson's River is not only a superior grain-growing country; it is equally famous for its vines and tobacco. Mr. Park, an extensive proprietor on the upper part of the river, and a nephew of the great African traveller, has a vineyard of not less than 35 acres; and the produce of tobacco in the district is very considerable. I was sorry to find, however, that the cultivation of the vine has as yet been by no means favourable to the morals of the district. A large portion of the labouring population of this country is so hopelessly addicted to intemperance, that the temptation of cheap wine, which they purchase in bucketfulls from the growers, is irresistible; and continual poverty and extensive ruin are the lamentable result.'