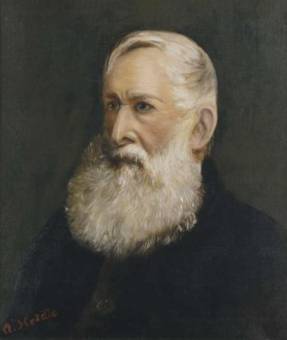 Robert Hoddle was born on 20th April 1794 at Westminster, London.

Robert Hoddle brought with him testimonies of his abilities, zeal and gentlemanly like qualities - one signed by Lieut-Col H. Anderson Morshead, Plymouth and the other from B.C. Williams of the Royal Engineer's Office at the Cape of Good Hope. [1]

He was appointed Assistant Surveyor in September 1823 and his first instructions from Surveyor-General John Oxley were to survey Bell's track from Richmond to Cox's River and to particularly observe the country side estimating the quantity of good cultivatable land.

He was to mark the streams and fords and ascend every eminence on the route. He was to take bearings to every remarkable mountain in view particularly such as were situated the counties of Cumberland, Windsor, Prospect Hill and Castle Hill. He was to observe and mark on the map the lands which from their fertility seem best adapted for cultivation by small settlers, the size and description of the timber growing and difficulties that might exist in the formation of a good carriage road. On returning by the same route from Cox's River and when on the range above the source of the Grose River, proceed a few miles to the northward in order to observe the nature of the country in that direction that some opinion may be formed of the probability of finding a better road to the settlements on the Hunters River than the one in present used. He was to go through the small farms in the Kurrajong Brush and take an account of the settlers residing on lands which had not been measured or granted but which they had been permitted to occupy. Afterwards he was to produce maps of his findings.

This seems to have been an arduous undertaking for someone who had been in the colony only a few months. It was calculated by John Oxley that it would take Hoddle approximately three weeks to complete the excursion. As it was intended that he would set out from Richmond on Monday 6th October he was to dispatch pack horses and provision and tent to Mr. Bell at Richmond on the preceding Thursday. William Cox was to furnish men to mark the road. Three men were considered sufficient, one to take care of the horses and provision and two with the chain and instruments.[2]

In September 1824 Robert Hoddle accompanied the expedition to Moreton Bay to establish a new settlement there. The expedition was led by Lieutenant Henry Miller of the 40th regiment (arrived per Isabella in 1823) and included botanist Allan Cunningham, 14 soldiers, 29 convicts and surgeon/storekeeper Dr. Walter Scott.

In December 1824 he received a grant of 1000 acres of land at Warkworth by order Sir Thomas Brisbane [3]. The location was about three miles from the township of Singleton and can be seen on the centre right of the map below.

In 1828 the following Government Order was published:

His Excellency the Governor has been pleased to appoint Messrs Robert Hoddle, J.B. Richards, James Ralfe and Heneage Finch, Assistant Surveyors, to be Surveyors, until the Pleasure of the Right Honorable the Secretary of State for the Colonies shall be known. By this arrangement the Appointment of Deputy Surveyor General is rendered unnecessary for the present and the Nomination of Mr. Hoddle to act in that Capacity is therefore cancelled. [5]

Robert Hoddle continued surveying in New South Wales until 1837 when he was appointed senior surveyor at Port Phillip, arriving there in March 1837.

In Surrey in November 1818 Robert Hoddle had married Mary Staton, by whom he had one daughter. Mary Hoddle and their daughter Sarah Elizabeth Hoddle arrived on the Pyramus in 1829, the same vessel that brought Robert Hoddle's sister Susan and her husband William Caswell. Susan Hoddle and William Caswell had married at Westminster on 12 February 1825. William and Susan Caswell later settled at Port Stephens, New South Wales. Robert Hoddle's first daughter Sarah Elizabeth Hoddle married A.A. Company., Superintendent James Charles White in Sydney in May 1837. Sarah Elizabeth died giving birth to her third child in 1841.

After Mary Hoddle's death in 1862, Robert Hoddle married in July 1863, Fanny Agnes, the 18-year-old daughter of Captain Benjamin Baxter; they had three daughters and one son.[6] 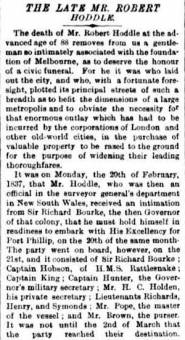