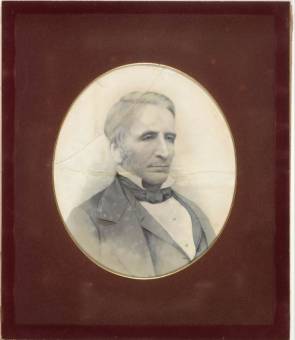 
George Boyle White was born on 24 August 1802 at Bantry, Cork, Ireland, elder son of Boyle White, R.N., and his wife Honoria, nee O'Sullivan. His father, reputedly a cousin of the earl of Bantry, died in 1806 and in 1814 his mother married George Henry Green, paymaster in the 57th Regiment. [1]

George Boyle White arrived in New South Wales on the Cawdry in January 1826.

Land he acquired included Mirannie which was a grant to his wife Maria Mudie situated on a tributary of Glendon Brook and Greenwood Estate which consisted of 325 acres purchased by George B. White and Captain George Green c. 1831 and was situated near Singleton.

1830 - Married Maria, the daughter of James Mudie of Castle Forbes


In June 1844 the Estates of George Boyle White were advertised for auction, 14 lots in all. It was stated that everybody that had ever visited Hunter's River must have heard of Mrs. White's beautiful Greenwood Estate. It consisted of 380 acres and adjoined the Town of Singleton; the most part of it was cleared and fenced and returning yearly rent of 15/- per acre. There was a cottage, office, outbuildings, Vinery, 7 acre garden and an orchard where every variety of fruit was grown in perfection and plenty.

Also for auction was a Church section adjoining Greenwood consisting of 585 acres; a cottage and land at East Maitland; 1280 acres on Miranne Estate, 1000 acres on Miranne estate (this was on a tributary of Glendon Brook; and an 86 acres farm at Lochinvar. Eight hundred head of cattle were running at the Severn under the superintendent of Mr. Hethrington and 300 head of cattle at Miranne Creek together with 50 head of cattle at Greewood. There were 2500 fine woolled sheep, horse stock, household furniture and 250 bushells of wheat also offered for auction.