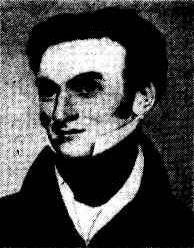 James Busby was born in Edinburgh in 1801, son of John and Sarah Busby. He arrived with his family on the Triton in 1824. William Kelman who later married James Busby's sister Katherine also arrived on the Triton.

James Busby was granted 2000 acres of land in 1828. This land was situated on Carrowbrook nearby land granted to James Black, seen in the top left of the map below.

Kirkton where James Busby established vineyards was a grant to his father John Busby. The estate was given the name of Kirkton by William Kelman, and it was there, in 1827, that Kelman and Katherine Busby were married. Rev. Richard Hill, the first incumbent of St. James Church, Sydney, made the hazardous journey north to perform the ceremony. The location can be seen lower centre on the map.

William Kelman had been granted land on the Macquarie River, near what is now the beautiful old village of Ross. He named the grant Glen Kelman, and set out to raise sheep. Whether the venture was unsuccessful is purely surmise, but at any rate he and his wife left Glen Kelman, loaded their sheep into a ship, and headed back to New South Wales. They arrived safely, but only a few of the sheep survived the voyage. Most were washed overboard in heavy seas. With their return well timed, William and Katherine Kelman went to Kirkton to look after the property while James Busby paid a visit to England. His mission - to buy grape vine cuttings. He had brought cuttings to the colony in the first place, and planted them in the Botanic Gardens. There they died of neglect while he was away. He collected more than 20,000 cuttings in France and Spain, sending them to the colony, at Government expense, in 1830. There were more than 350 varieties and they were planted that year at Kirkton. - Singleton Argus 7 November 1952

James Busby was a dedicated viticulturist. In 1825 he published A Treatise on the Culture of the Vine and the Art of Making Wine. He provided vine cuttings to George Wyndham of Dalwood in July 1830. (See George Wyndham's Diary)

The following convicts were assigned to James Busby at the Hunter River:

After various Government appointments, James Busby returned to England arriving there on 14 July 1831. While in England he gave evidence to the Select Committee investigating Secondary Punishment of prisoners. 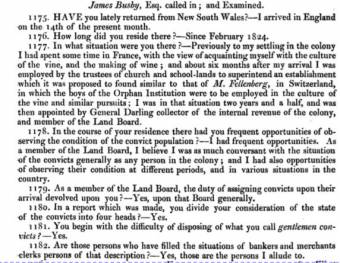 He sent back to Australia on the Lady Harewood in 1832, an extensive collection of over 500 vine cuttings selected from the different vineyards of France (2)

In 1832 he was appointed British resident in New Zealand. He arrived back in Australia on the Planter in October 1832, married Agnes Dow of Segenhoe, (sister of John Dow) in November and returned to New Zealand in April 1833.