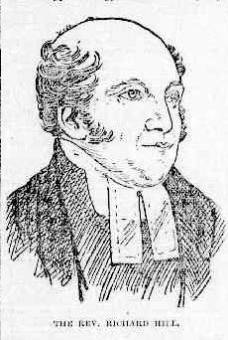 Rev. Richard Hill arrived from England with his wife Phoebe Saphira on the Hibernia in 1819.

In New South Wales he worked as assistant to the minister to Rev. Cowper at St. Phillip's church. Later he became minister at St. James's Church in Sydney.

He was Secretary of the Benevolent Society, Director of the Natives Institution and a trustee for various corporations.

He was granted 1200 acres by Governor Macquarie and selected land at Wollombi. Here he built a stone house at the junction of Wollombi Brook and Parsons Creek.

In 1834 Milbrodale was advertised to be let or sold. The estate included 600 sheep, 17 working bullocks, 250 head of cattle and 15 horses. There was a slab cottage, a stone barn, sheep pens, tobacco sheds, carpenter's shops, blacksmith's forge and vineyards.

Rev. Richard Hill died in June 1836. He was buried in the old Devonshire cemetery in Sydney - his gravestone recorded the following:

'In memory of the Rev. Richard Hill, first pastor of St. James's Church Sydney, who departed this life on 30th May, 1836 aged 54 years. 'be thou faithful unto death and thou shalt receive the crown of life'. Phoebe Sapphira, wife of the above, born February 29 1780, and died 7 November 1863 is also buried there. The Devonshire St. Cemetery, Sydney Morning Herald 7 May 1901.