Escape from Nobbys Island in 1842

Lieutenant Simon Fraser was born in Scotland in 1791. He entered the army on 7 March 1810, enlisting with the 80th regiment.

Accompanied by his wife and 10 children, Lieut. Fraser arrived in Australia in August 1839 on the convict ship Marquis of Hastings.

He was appointed Magistrate in 1840 and by 1841 was stationed at Newcastle where he was employed as Assistant Engineer and Superintendent of the Iron Gang and No. 3 Stockade. He lived in Newcastle with his wife and family in premises nearby or at the officers' quarters.

They were hardened men; mostly twice convicted. Many worked in leg irons - assigned to work at building the breakwater, fixing the roads and other public works around the town. Food and clothing were inadequate. If they attempted escape, punishment was harsh. Sometimes they were sent to the treadmill in Sydney or sentenced to as many as 100 lashes for absconding. Or, as in the case of Thomas McKenny, they were ordered to undergo an additional twelve months labour in irons. McKenny, an incorrigible offender, was already serving 3 years in heavy irons at No. 3 Stockade at Newcastle. After this additional sentence he was sent to Nobby's island for greater security.[8]

The Stockade on Nobby's was established for those prisoners working on the breakwater. To be sent there was a harsh punishment indeed as amongst all the other deprivations there was no water at Nobby's. It would have been carted from the well back near the Watt Street Stockade. Relatives were not allowed to send tobacco or food. Correspondence requesting such articles was seized by the military and destroyed. [3]

Neither were prisoners at Newcastle permitted to work on their own behalf. Lieut. Fraser came into conflict with long time resident Simon Kemp when he punished prisoners who had been employed by Kemp to load coal from the boats. [9]

Although prisoners were not supposed to work for themselves, those assigned to the lighthouse or hospital were able at least to procure some extra food, perhaps oysters and fish or grow some vegetables, however most of the convicts in the Stockade had little hope of finding anything extra to eat or to wear as winter drew near.

As Superintendent of the Iron Gang and Stockade it was not only Lieut. Fraser's responsibility to further the public works in the town, but also to ensure the convicts were secured. His job was not an easy one, and in addition he had to manage the soldiers stationed there. The detachment of the 80th on duty until January 1842 were highly regarded and departed with good will, however after their lengthy stay at Newcastle, they were very happy to be returning to headquarters and celebrated with gusto on the eve of their departure.

The detachment that replaced them was comprised of some very young men and their ineptitude, disloyalty and poor behaviour towards the townsfolk, in particular Rev. Wilton, brought the regiment into great disrepute.[10]

It wasn't easy for the soldiers stationed at Newcastle. They were isolated from their contacts in Sydney and their lives were necessarily ruled by the regimen required for the convicts. The soldiers too were subject to government rations, monotony and a day ruled by bells. In addition they were required to employ constant vigilance to guard against escape by a most desperate set of criminals.

By 1842, the soldiers were probably housed in the new Military Barracks. They were at least fortunate in this. Conditions for the prisoners incarcerated in the Newcastle gaol were awful. The gaol was described in 1842 as an old, inconvenient, rambling building, altogether deficient in affording the necessary security for the safe custody of prisoners and entirely destitute of those means of accommodation and comfort so necessary to preserve its inmates from the ravages of contagious disease.[4] There were 112 men and 53 women held in the gaol until the next Quarter Sessions which weren't held until 1 March.

For men in the Stockade life was even more difficult and uncomfortable than the gaol.

As another winter approached the prisoners at Nobby's probably became a little more desperate. At 7am on 12th May, in what was probably a well thought out escape plan, four prisoners John Roach and John Atkins from the ironed gang, John Thomson from the A.A. company and John Raddish of the boat crew assisted by a soldier of the 80th regiment, George Wilson, stole a boat belonging to Alexander Walker Scott (possibly the life boat) and absconded from the Nobby's Stockade. After making their initial escape, they abandoned the boat and took to the bush. [11]

A party of soldiers and residents set out after them, however the absconders managed to evade capture for several days. Although settlers were warned to prepare for a nocturnal attack, there was little Frederick Platt could do when the bushrangers made a daring assault on his premises near Raymond Terrace. They struck on Sunday 15th May at 10pm, entering through the kitchen with guns at the ready. There are conflicting reports as to whether the soldier George Wilson was with the gang at this stage.

The Hunter River Gazette reported the robbery: Four bushrangers armed with one musket two pistols, and bludgeons, visited the premises occupied by F. W. Platt Esq., and situated about nine miles in the bush behind Raymond Terrace. The depredators, who approached without the least noise, the dogs not even giving notice of their vicinity by barking, first entered the kitchen in which were two men and one woman servant; one of their number holding a loaded pistol in his hand was placed as guard over these domestics, and the other three then rushed suddenly into the parlour where Messrs Platt and Wray were at the moment seated at table reading, and quite unconscious that the outworks of the domicile were in the hands of an enemy.

The first who entered was armed with a bludgeon, and with many threats the ruffian desired the inmates to kneel down with their faces to the wall, two pistols and a musket being pointed at them from the door by the other two men. They then marched the servants from the kitchen into the parlour and also obliged them to kneel down beside Messrs. Platt and Wray. Having thus collected the whole inmates into one group, they placed one of the party armed, over them with orders to blow the first person's brains out that moved.

The other three then proceeded deliberately to plunder the house; from which they took everything of value. After packing up every article that was likely to be of service to them they conducted Messrs Platt and Wray into a bedroom and searched their pockets. They then prepared to take their departure but before doing so, they desired that no one if he valued his life should leave the house during the night, as they intended to encamp in the immediate neighbourhood. The property carried away by these daring and lawless ruffians chiefly consisted of wearing apparel, trinkets, etc with one musket and a brace of pistols, and amounted in value to about £90. [5]

Their descriptions were posted in the Government Gazette:

In the end it was Constables who captured the bushrangers (and probably pocketed the reward): Chief Constable Abbot and settler John Lord captured John Reddish first in the vicinity of Wallarobba. [14]

When Chief Constable Sullivan a retired soldier, and constables Moss and Evans heard word that the escapees were in the vicinity, they left Newcastle well armed and in company with a native from the town who found the bushrangers trail after only a few hours. They followed the trail all the way to the junction of the Allyn and Upper Paterson River where they came upon the bushrangers concealed in scrub. Constable Sullivan took a few minutes to reconnoitre before giving his men the order to level their guns at the bushranger's heads, while at the same time ordering the bushrangers to deliver up their arms and surrender or imperil their lives. At first George Wilson presented a pistol at the chief constable's head but wisely surrendered without firing.

They were immediately placed in irons and brought back to Newcastle where they were secured in the lockup. In their possession were found gentlemen's coats trousers, waistcoats pistols, silk handkerchiefs and a saddle. [12]

George Wilson was sentenced to 15 years in Van Diemen's Land. He was transported on 15 October 1842

John Roach and John Atkins were sentenced to 15 years penal servitude. They were transferred to Cockatoo Island. 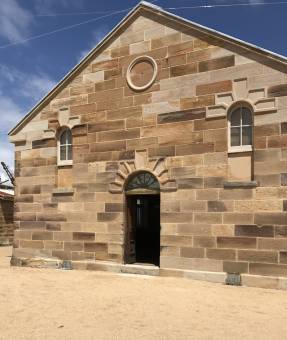 Lieut. Fraser's position as Assistant Engineer at the Stockade was taken over by Captain John Armstrong of the 99th regt., in May 1842. [15]

The 80th Regiment sailed for India on the 12th of August 1844 and Lieutenant Fraser, then aged 53 sailed with them. He was promoted to Captain, however never returned to Australia, dying on 24th December 1845 from wounds he received at the Battle of Ferozsehah.