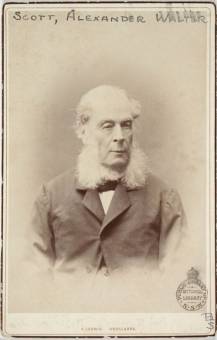 
Alexander Walker Scott was born in Mumbai in 1800. He arrived in Sydney on the Australia in 1827. He was a brother of Hunter Valley settlers Robert and Helenus Scott who arrived in the colony on the Britomart in 1822.

Alexander Walker Scott was granted 2560 acres of land at Ash Island in 1829. He married Harriett Callcott in 1846.

A visitor to his homestead at Ash Island in 1834, after crossing by boat found a pretty house with a fine black swan, newly shot by the overseer, hanging above the entrance to the house. The house was surrounded by dense bush and tropical vegetation.

Alexander Scott was visited here by explorer Ludwig Leichhardt in 1842 and offered to clear 10 acres in the district, construct a cottage and establish a vineyard for Leichhardt.

Alexander Scott had a keen interest in natural sciences and was a supporter of the Australian Museum. Later his daughters Harriett and Helena, would prepare outstanding drawings of the flora and fauna on Ash Island.

Their life on Ash Island was not without excitement. In 1834 Lieutenant Zouch from Newcastle township was required to visit the area to quell natives who had gathered after one of their tribe had been shot by a constable. In 1842 settlers in the vicinity of Newcastle were warned to be prepared for a nocturnal attack after four prisoners and a soldier absconded from Newcastle, stealing a boat belonging to Mr. Scott at Ash Island. The men were said to be desperate and a 'strong party of gentlemen with some soldiery' were in pursuit of them. Select here to find out more about these bushrangers

In 1834 Scott purchased 50 acres on Stockton Peninsular. It was very sandy and unable to be used for agricultural purposes. In partnership with his brother in law, James Mitchell, he began a salt making industry on the peninsular and later an iron foundry which in 1842 provided castings for the Australian Agricultural Company's pit engine. Pots were made for the boiling down of sheep and a boiler for the Hunter Brewery was being made by 1843. However this was a time of great economic downturn and Scott's iron foundry business did not survive. He continued his salt making venture and was advertising 70 tons of Stockton Salt for sale in 1847. In 1848 James Mitchell bought out Scott for £8320.

Alexander Scott was instrumental in establishing a copper smelter, firebrick works and textile factory in the area. Early in 1843 artisans and labourers had arrived at Stockton to begin constructing the textile works. He canvassed to represent in the Legislative Council in 1843 and stated then that he was 'an employer to a large extent of free labour - and had a constant desire for the advancement of the district and discouragement of foreign imports. At his own expense a line had been already surveyed and accurate levels taken for a railroad between Newcastle and Maitland. He had foreseen the advantages of steam and attempted to purchase a steam vessel for the Hunter before the first steamer 'Sophia Jane' arrived. This did not eventuate although later he was to contribute to the building of the steamer 'Ceres'.

In 1847 he was offering for sale from Ash Island 100 tons of prime Lucerne hay (hydraulic pressed and bound with iron or lashing), as well as 8000 large well-flavoured oranges and 10 tons of pumpkins. During these years Scott played an active part in Newcastle life. In 1836 he was treasurer of the newly formed Mechanics institute. In the 1840's he attended meetings at Christ Church and at the court house when Governor Gipps visited Newcastle. He also raced his boat in the Newcastle Regattas

In 1848 he advertised 'Deega Estate' and his Pacific Street, Newcastle property for sale. Deega estate was 2560 acres within two miles of Lake Macquarie. Abundantly watered with several flats of rich land suitable for agricultural purposes with an unlimited back run; The city property consisted of almost a quarter of an acre with a five roomed cottage.

On the 20 January 1866, Alexander Scott's wife Harriet, died unexpectedly. She was buried in Christ Church Cathedral burial ground. Later that year he was declared bankrupt.

Alexander W. Scott died of liver disease at Paddington on 1 November 1883. He was buried in the Anglican section of Waverley cemetery. His estate valued for probate at £1602, was left to his daughters and step-daughter Mary Ann Calcott.

Scott Street, Newcastle, was named after him. [2]