Our Ancestors were Ruled by Bells

Bells played an important part in the lives of our ancestors.

At the Penal Settlement at Newcastle in 1818 Commandant James Wallis was instructed to punish with 25 lashes any prisoner leaving work before the bell rang signifying the end of the day's labour. Between 1819 and 1820 eight bells were sent to Newcastle.

Convicts' lives were ruled by bells. They were awakened by them, and called to meals, to church and to muster by the ringing of the bells. They were called to labour, where they remained for the day. Even if they finished their allotted tasks before the ten hour bell rang, they were required to remain at their work place and await the sound of the bell, at which time the convicts all left work together.

At night at Newcastle in the early days, the bells rang at eight o'clock in winter and nine o'clock in summer.

It is also possible that bells were rung at any of the nine executions that took place at Newcastle.

All sailors and masters of vessels were to have returned to their vessels by this time. Sailors in breach of this order could receive corporal punishment if caught. A sentinel was placed at the wharf to detain anyone transgressing the rules. Sailors were well used to a life ruled by bells as well. A correspondent to the Sydney Gazette described Campbell's Wharf in Sydney in 1831 - Arriving at the wall enclosing those spacious premises of Robert Campbell, a person of indefatigable industry , strong reason, and great experience, - you enter a wicket, cross a yard not unworthy of the London docks, and descend to that busy haunt of commerce, Campbell's Wharf, alongside which lies the steamer, impatiently awaiting the arrival of her passengers. Before you is the famous Port Jackson, crowded with shipping from many a clime, their glimmering lights dancing upon the rippling waters, and their hollow toned bells chiming, in quick succession, the high naval hour of eight.

It was not only convicts and sailors who were ruled by bells. Agricultural workers on the farms had their days marked out, companies marked their hours of business and city folk were subjected to the night watchman ringing the hour every night

The only workers to escape the regimen of the bells were the timber getters. They left the Newcastle settlement for up to a month at a time, travelling far up the river in search of the valuable iron bark, cedar and gum trees. They escaped the strict routine for a while but had hostile natives, inadequate rations and arduous work to contend with instead.

In Newcastle and Stockton in 1848 they were called to Sunday school by the sound of a bell - 'The bell which on week days is rung to call together the workmen on the north shore of our harbour, has been heard on the two last Sabbath Days sweetly sounding at eight o'clock in the morning and at two in the afternoon, for the purpose of calling the children connected with the factory at Stockton to attend the Sunday School, which, as well as a similar one at Newcastle is conducted by Mr. J. Stewart, a son of the Rev. R. Stewart, the highly respected Presbyterian minister at present officiating at Newcastle; who has also performed divine service at Stockton, at three o'clock in the afternoon of the two last, and intends to continue doing so on each succeeding, Sunday, at the same time and place.'

For years children were summoned to school classes by the ringing of a bell.

Bells were used to signify celebrations (Ringing in the New Year with three bells in 1845), and to summon parishioners to church.

As well as to signify celebration, toll the hour or summon to work, bells also tolled for death. In 1820 when the Convict Ship Neptune brought the news of the death of King George III, the bells of St. Phillips tolled morning and night. As can be seen from the article below, written by a correspondent to the Australian (XYZ), they weren't always popular..... (The Scotch parson the correspondent refers to was Rev. Dr. J. D. Lang)

January being the most disagreeable month in Sydney, when the heat and mosquitos are alike troublesome, the meat and water very bad; and the fruits still unripe, and it being the period of the year generally reminding one of holidays and the country, I determined to avail myself of a little leisure, and as soon as I had seen the old year out, and new year in, gave orders for getting the old portmanteau ready for a start in the Liverpool Packet for Newcastle. Home keeping youth have ever homely wits, and a little change, now and then, has the happiest effect upon our whole system. I made my conge to the streets of Sydney with the greater pleasure, as every body was talking of the sudden death of the chief baker, and the newly imported and noisy bell of the Scotch Parson, was tolling the news with its iron tongue, not into those ears only, but into the heads of all his Majesty's liege subjects, half a mile round 'Man may escape from rope and gun, Nay, some have outlived the doctor's pill' - but I quite expect to hear before the summer is out, that some nervous sensitive persons will not so easily survive the Doctor's bell. What can the Aurora Australiis mean by introducing this dark and benighted relic of Monkish superstition into a new country? The original meaning to pray for the soul of the departed that it may have a prosperous voyage to the other world is now confined to the Catholics, and if the Doctor would send his bell to the Rev. Priest, at Hyde Park, the nuisance could be well spared

We are highly pleased to observe that Mr. Smart of George Street, who has lately commenced business as an auctioneer, has set an example to his Sydney brethren by dispensing with that most intolerable nuisance - an auction bell. We did think that when the Police Act was under manufacture by the authorities this town pest would have been first thought of.

1]. Robert Chitty of the Jewboy Gang and the Bell at Turanville

7] The Bells of All Saints' Church, Parramatta

9]. Find out more about bushranger John Fitzgerald and his diving for the Lady Nelson's Bell 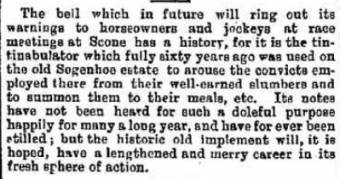