Evans was appointed assistant Colonial Surgeon in Sydney in 1809, replacing Charles Throsby. By the end of 1809 he had been dismissed from this position for speculating in colonial paper currency. His request to be reinstated was refused and by the end of 1810, Evans had been imprisoned for debt to William Hobart Mansel. Mansel was a Sydney trader who had previously been employed as a clerk by Simeon Lord but became a trader in partnership with Thomas Abbot.

Meanwhile, Evan's wife had obtained passage on board the convict transport Indian and arrived in December 1810, probably to find her husband in prison. Evans was supported in his efforts for release from prison by Dr. Darcy Wentworth. On hearing the rumour of Evans' appointment in 1810 the Commandant at Newcastle John Purcell voiced his displeasure......'they always have considered themselves the higher rank and interfere with everything at the settlement' he wrote of the naval surgeons. Despite this by 1811 William Evans had been appointed assistant-surgeon at Newcastle.

In the middle of 1811 Evans was once more arrested - this time for misconduct. He was sent to Sydney while an investigation took place into his alleged misconduct.

After the investigation he was reinstated in his duties at Newcastle and two years later was given 100 acres of land at Paterson River. He was supplied with stock from the Government herd and convict servants were assigned to him to be supplied from the Stores at Newcastle for eighteen months. William Evans did not reside on his estate as he continued in his capacity as surgeon at Newcastle.

In 1832 travellers by land from Maitland to Paterson in the 1830's would ford the Hunter River and pass through lands belonging to McDougall and Jones and enter the grant of Dunmore belonging to Andrew Lang. Here there was a cross roads where they could proceed west towards Luskintyre or east to meet the road to Port Stephens or continue north on to Bellevue the estate of Dr. William Evans. 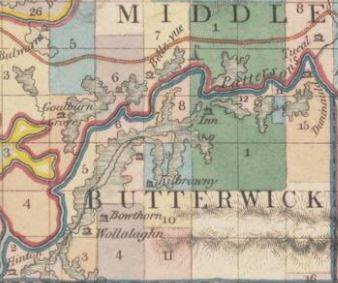 William Evan's house was situated on the banks of the Paterson River. After leaving Evans' property, travellers would enter a church grant which occupied both sides of the Paterson River. Here had been built a lockup and a school house. On the opposite side of the river to Bellevue was the farm of John Tucker and adjoining Bellevue to the west was the estate of Timothy Nowlan.

Location of Bellevue centre above

Life as Surgeon at Newcastle

After 1813 the convict population at Newcastle increased as the Sydney facilities became overcrowded and convicts were sent from there to Newcastle. Supplies at the settlement were inadequate and Evans wrote to the authorities of the venereal disease at Newcastle and the desperate need for medical supplies; and later in 1815 recommended that patients be sent to Sydney as he had no medicines to assist them. In 1816 conditions were still appalling in the hospital and Evans informed the authorities that there were only three blankets for 25 patients, some patients having also to lay on the ground.

In 1814 he made complaint regarding the poor repair of his house at Newcastle and he was given permission to have furniture made.

He was in further trouble in 1817 when he returned after a sojourn in Sydney where he had hoped to receive surgical treatment for his hand which he injured in an accident when a gun exploded. On his return to Newcastle on this occasion he brought spirits with him, despite the objection of Commandant Captain James Wallis. Although Evans had protested that the spirits were for his own use, Wallis complained that the alcohol had caused drunkenness and irregularity in the Colony.

William Evans' name is included in a list dated 6 November 1824 of settlers who received a town allotment at Newcastle.

By 1822 he requested to retire because of the injury to his hand. He also requested his grant be extended. He retired from Government employ, perhaps to his property on the banks of the Paterson, hoping to run it more efficiently than it had been in his absence. As it was many hours travelling up river to reach the farm, he had been compelled to leave it in the hands of his assigned convicts while he continued his work at Newcastle.

The farm did not give sufficient returns he thought, because of the dishonesty of the people working there. He did however have on the property a log barn which was thatched and a log and stone cottage as well as an orchard. Seventy acres had been cleared and 23 head of cattle and 150 sheep were kept there. His farm was plundered by bushrangers in 1825. The infamous Jacob's Mob took nearly all the clothing belonging to his family.

1. This William Evans is probably not the son of Evan Evans R.N. (1760 - 1815) who had several sons who entered the medical profession (see Welsh Biography Online).

3. Select here to find convicts assigned to William Evans at Newcastle and Bellevue