Richard Binder was tried in Northampton in July 1801 and sentenced to 14 years transportation. He arrived in Australia on the Glatton in 1803. It seems for a time he continued his life of crime as in November 1806 he was one of four people convicted of sheep stealing at Kissing Point, Sydney. He was on the list of assigned servants of Mr. Hobby at the Hawkesbury in 1809 where he received government rations.

In February 1813 ten years after arriving in the colony and still residing at the Hawkesbury, he was granted permission to marry Mary Bell who had arrived on the Minstrel in 1812. [1] However four months later, on 28 June 1813 at Windsor he was sentenced to 3 years transportation for an unknown crime and sent to Newcastle Penal Settlement. Another early farmer of Patterson's Plains, Thomas Addison was sent to Newcastle on the same day. There are no records indicating that Mary Binder followed her husband to Newcastle and she probably remained at the Hawkesbury.

Richard Binder was granted permission to occupy land at Patterson's Plains in 1818. He married Ann Burrell at Christ Church Newcastle in that same year. Ann Burrell had arrived on the Mary Ann in 1816. She had been sent to Newcastle penal settlement for a colonial crime in March 1816.

Richard Binder petitioned Governor Macquarie for a Conditional Pardon in 1821 when he stated that he had been granted permission by Commandant Captain James Wallis to occupy a farm at Patterson's Plains and afterwards had been appointed District Constable by Commandant Major Morisset. [2]

In 1831 Ann Binder married James Cox at Newcastle. The Maitland Mercury reported her death in June 1857....Ann Cox, wife of James Cox of Phoenix Park and formerly of the Union Hotel, East Maitland, died at the house of Quinten Swift age 62 years.

In 1844 an advertisement in the Maitland Mercury mentioned Binder's allotment....Great sale of town property at East Maitland and Newcastle, In the Insolvent Estate of James Cox of East Maitland, by order of the Creditors..... Nineteen allotments of land adjoining the Union Hotel in East Maitland and an allotment of land at Newcastle adjoining the land of T.W. Winder Esq., and generally known as Binder's allotment; it is situated close to the harbour, and, in the event of Newcastle becoming a free port will be immensely valuable. There is a house on the land which is at present rented at £24 per annum.[4] (See Map of Newcastle (n.d.), showing location of Winder's allotment top right quarter.) This was the same allotment or close to, that the
Steam Packet Inn was situated on.

James Pawsey who had been employed as landing waiter and postmaster at Newcastle, took over the Australian Inn in 1831/32.

Peter Joseph Fredericks was granted a licence in 1833. When the vessel 'Ceylon' was wrecked at Newcastle on 17th February 1834, Peter Fredericks provided accommodation at the Inn for the survivors. [5]

Later in 1834 Francis Beattie formerly of the Crooked Billet, held the licence. 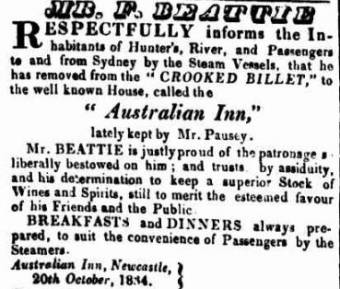 In 1836 Charles Hughes was publican. A charge against Hughes by Constable Rouse of supplying a prisoner of the Crown with liquor without a pass was dismissed by the Bench in February of that year.

Charles Hughes later held the licence for the Woolpack Inn in West Maitland.