Charles Hughes was tried at the Old Bailey in January 1817. He was charged with committing a 'felonious assault on the King's highway' after stealing a watch and other articles belonging to Isaac Prigg. His sentence of death was commuted to transportation for Life and he arrived in New South Wales on the convict ship Larkins on 22 November 1817 with 245 other convicts.

The ship's indents record that Charles Hughes was 19 years of age with dark hair, blue eyes and a dark sallow complexion. Seventeen months after arrival in Sydney, he was sent to the penal settlement at Newcastle where in November of that year he and John Davis were both punished with 25 lashes for gambling. This seems to have been his only lapse. When he was granted a conditional pardon many years later it was recorded that he was born in Manchester and had been a seaman before his sentence. His previous experience led him to being assigned to the pilot at Newcastle and he was soon employed as an assistant pilot at Newcastle working under William Eckford.

He was involved in the pursuit of Convict Pirates who escaped from the settlement on the cutter Eclipse in May 1825 which resulted in his being recommended for the salary of overseer by the former Commandant Henry Gillman. Captain Gillman described Charles Hughes a very well behaved and useful man who had been a Newcastle six years, four of which had been as assistant pilot. 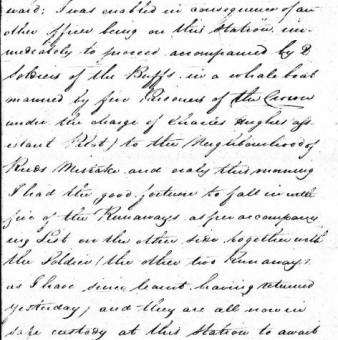 Correspondence from Lieut. Owen regarding the escape of convict pirates in the Eclipse in 1825. Charles Hughes, assistant Pilot in charge of convicts in the pursuit boat. [1]

In October 1824 he applied to Rev. G.A. Middleton to marry Sophia Friar (Frayer) a convict girl who arrived on the Brothers the previous April, however Sophia had entered a relationship with James Henshaw by 1825.

In July 1827 at Christ Church Newcastle Charles Hughes married Amelia Nicholls and also in this year he received a Ticket of Leave for the district of Newcastle which allowed him to work on his own behalf. The 1828 Census records his occupation as fisherman. In the 1828 Census he and Amelia, (b. c 1811 at Prospect, daughter of John Nicholls and Ann Pugh), have a six months old son Thomas.

Charles Hughes returned to his work as assistant pilot probably taking over the duties of William Cromarty when that man was injured and forced into retirement. 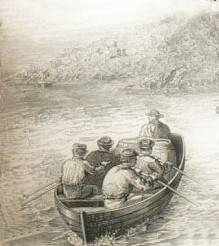 He was on hand in 1834 to assist the crew of the vessel Mary Jane when she ran into trouble in bad weather off Newcastle. The incident was described by one of the men - 'Mr. Charles Hughes, assisted by his men, came out with his boat to our assistance, at a very early hour of the morning of the 7th but, from the heavy sea and swell, he was compelled to go back, and he and his men immediately repaired overland (a distance of 13 or 14 miles all of which is a soft sandy beach) to the scene of our distress where he remained that night and ensuing day in a diligent endeavour to recover the vessel but the sea still continuing to keep up with increasing violence, the vessels bottom was staved';

At this time, even after so many years service, Hughes position was that of Assistant pilot and perhaps there were others vying for the position of Pilot at Newcastle - The Sydney Gazette wrote in March 1834 that 'In no harbour or river of the Colony is the necessity of a pilot more urgent than in that of the Hunter. Trade between Newcastle, Maitland, and the numerous flourishing establishments and villages formed upon the banks of that fertile river, is now conducted upon a very extensive scale. Large vessels occasionally touch and many would probably do so if they were provided with a public pilot, responsible for the safe navigation of the river. The 'Australian' briefly notices the want of such an officer, and we cordially join it, in deprecating the negligence of the Government, in so long withholding a pilot from a part of the coast where it is much wanted. Mr. Eckford, once a pilot has been superannuated. If his services were wanted years ago, surely the increase of trade now imperatively demand a person of this description'.

Stung into action, Charles Hughes penned his reply to this criticism of his work and in April the following letter appeared in the Sydney Gazette -

'To the Editor of the Sydney Gazette, Sir, Assured that you will enable me to counteract any possible injustice, founded upon ex parte statement got up, if not for interested purposes, with a view perhaps to prejudice the hopes of reward after a servitude of seventeen years, I humbly beg your insertion of this letter, in contradiction of an article published in the Sydney Gazette of the 22nd ult, in reference to the pilot duties and harbour of Newcastle. I beg leave to state for the information of the Government, that I have performed the duties of pilot at Newcastle, not only from the superannuation of the late Mr. Eckford, which took place in the year 1827, but for ten years prior to that occurrence without imputation or fault, that my conduct during which space for capability and attention is now submitted to be subjected to the most rigid scrutiny, and that I have individually safely conducted into, and out of this harbour, the largest ship, and the largest brig, which has ever entered it. In conclusion, Sir, I beg to annex the certificate of Captain Dixon, of the Richard Reynolds (which is one of numerous others similar to it in my possession) which ship has just cleared hence from the Australian Company's wharf, laden with between 400 and 500 tons of coals, and draughted 14 feet 9 inches of water.
I remain Sir,
Charles Hughes, Acting Pilot. '

In December 1834, the Sydney Monitor noted that Mr. Hughes, formerly pilot at Newcastle, had been engaged as mate on the steamer Tamar.

Charles Hughes later went on to pursue a career as an Innkeeper, first at the Australian Inn in Newcastle and later in Maitland at the Woolpack Inn at Anvil Creek in the 1840's.