Alexander Livingstone arrived in Australia in 1821 as Chief Officer on the Jessie. Passengers on the Jessie included Henry Dangar and Robert Coram Dillon.

Grant of Land Near Hinton

Alexander Livingstone proceeded to Newcastle in 1822. Like many others arriving in these years, after alighting at the wharf at Newcastle probably boarded a ketch or rowing boat to travel up River to select his land. He received a grant in 1823 of 1075 acres situated near Hinton and adjoining the grant of James McClymont. He later increased this holding to 2000 acres by purchase. Here he later built Bowthorne House.

In the early years Captain Livingstone commanded several coastal cutters including the Sally and Eclipse and then became Master of the famous little packet Lord Liverpool which had been purchased by T.W.M. Winder and George Williams in partnership. The Lord Liverpool carried mail, cargo such as wool and coal from Newcastle, and passengers to and from Sydney.

He became part owner with Rapsey and Mitchell of the Lord Liverpool. He had very many adventures and nearly perished on more than one occasion while doing duty as Captain on that vessel. The Australian reported in October 1827 -

Whilst the cutter, Lord Liverpool, was beating out of the harbour of Newcastle last week, with a smart breeze, on her passage to Sydney, she was unluckily suffered to drive upon a sand bank, and it required the most active and skilful exertions of her commander and others concerned, to preserve her from imminent destruction. At the time of her taking the ground a pilot was on board, and his boat which was a whaleboat lay towing a stern. Into this jumped the master of the Lord Liverpool, and with several hands was actively engaged in endeavouring to help off the fine little craft from her perilous situation, when a surge took the boat, swamped and swallowed her. One of the pilot's crew unhappily sunk to a briny grave. Mr. Livingstone, the master, got under the boat for some moments and was nearly suffocated before he could again float to the surface. By dint of hard swimming and considerable exertions, however, Mr. L. and his companions managed to escape from the devouring element. And after grinding on the bank for some minutes, the little vessel was again floated off into deep water, her bottom being somewhat damaged, and her rudder sprung, two of the pintles being gone.[5]

Granted Allotment of Land at Newcastle

Alexander Livingstone's name is on a list of men who were granted allotments in Newcastle.... 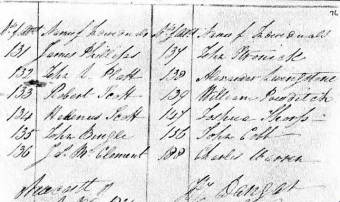 In February 1830 he was congratulated for piloting the Cumberland into Newcastle harbour, it being the largest vessel to have ever entered the harbour to that date.

Retired to the Comforts of Shore

In 1826 Alexander Livingstone married Mary Dillon who arrived on the Francis in 1823 and was a sister of Robert Coram Dillon. He may have resided in Sydney at this time. The Lord Liverpool was captained by William Powditch in 1830 and Captain Livingstone retired to 'the comforts of shore, with unanimous good wishes of a large circle of friends'.

He was well regarded and a dinner was given in his honor in 1830. The newspapers recorded the following article:

At Cummings Hotel (Sydney) - On Friday last, the 12th instant, a select party of those friends of Captain Livingstone, residing in Sydney, entertained that gentleman at dinner at Cummings' Hotel, on the occasion of his retiring from the command of the Lord Liverpool Packet, to settle on his estate at Hunter's river.

The dinner was got up in Cummings's best style. After the usual patriotic toasts to the King, Army, Navy, and His Excellency General Darling the Chairman, Mr. Maziere rose and addressing Captain Livingstone said,

'Sir, We cannot witness your resigning the command of the Lord Liverpool packet without expressing our regret at losing so indefatigable and able a commander. That regret, however, is obliterated when we learn that your labours have been crowned with the success you so justly merit, and that a happy retirement invites you to your farm. During a period of seven years, we have observed with much satisfaction, the upright and faithful discharge of all those duties which are combined in your abilities as a commander, your conduct as a gentleman, and your zeal and attention as a friend to the comforts of all those who have had the pleasure of sailing as passengers with you. To convince you of our sincerity and friendship we beg your acceptance of a piece of plate (presenting him with it), whereon are inscribed our feelings towards you. We cannot conclude without wishing you a long continuance of health and happiness and that your future exertions may be attended with the same success, in ploughing the land, as they were in that of the ocean. With every assurance of regard, we are your sincere and attached friends.'

Captain Livingstone appeared greatly affected, and with much emotion replied -

'The very handsome compliment you have just paid me affords the most heartfelt satisfaction; yet I am induced to think you have greatly over rated any merit that attaches to me: for, if in conducting the Lord Liverpool for the few past years, my exertions to contribute to the comfort of you, gentlemen, and others who were passengers, have met approbation, I consider that I was merely fulfilling my duty, whilst at the same time, I had the pleasure of your agreeable society. Your expressions of esteem are therefore the more gratifying and will render my retirement more happy, from the consideration of possessing the regard of so respectable a number of individuals. The piece of plate by which you further mark your kindness, I gratefully accept and can only say I shall ever prize so flattering a testimonial. Allow me, in concluding to return you individually and collectively my best wishes for your health and prosperity. '

Captain Livingstone sat down amidst repeated cheers which having subsided, the chairman proposed his health which was drank with the greatest enthusiasm. The pleasure of the table were continued until a late hour, when the party closed, after passing a very pleasant and cheerful evening. Palmam qui meruit ferat. N.B. (Let him bear the palm who has deserved it.)'[6]

Bowthorne house was built with extensive gardens and vineyards facing the River. The house itself was built of stone and consisted of ten rooms. There were servants quarters, stone dairy, wheat silos, coach house, overseer's house, provisions stores, stables, stock yards and huts. The estate was auctioned in 14 lots in 1843 after Alexander Livingstone ran into financial difficulties in the drought and depression. [1] Bowthorne House was situated on lot 1 and consisted of about 140 acres.

Alexander Livingstone remained in the area. He donated three allotments of land for a Church at Hinton in 1845, and in 1846 he was involved in Regattas at Hinton and Stockton.

Alexander Livingstone returned to Newcastle and was appointed harbour master in August 1846, a position he held until 1858 when he retired from his position. .

It was stated that his thorough acquaintance with the harbour and his long connection with the Hunter district were an ample guarantee that he would discharge his duties efficiently and faithfully.

In 1847 he was one of the townsfolk involved in organising a reception for the Governor Sir Charles Fitzroy on his Excellency's visit to Newcastle.

Alexander Livingstone died in 1867.... The funeral took place on Friday afternoon, shortly after two o'clock. He expired at his residence, East Maitland, and his remains were conveyed to Newcastle by the midday train, for interment in the Presbyterian burial ground near the Cottage Creek Bridge. The cortege was met at the Honeysuckle Point station by a number of friends of the deceased, who had assembled for the purpose of attending the funeral. Throughout Thursday and Friday the whole of the vessels in port, as well as most of the principal stores in the city had their flags half mast high, as a tribute of respect to the deceased gentleman..[7]

1). Select here to find the names of convicts assigned to Alexander Livingstone at Bowthorne and Newcastle

2). Select here to read about the removal of the Signal Staff at Newcastle in 1858

[1] Mitchell, Cecily Joan (1973). Hunter's River : a history of early families and the homes they built in the Lower Hunter Valley between 1830 and 1860. Administrator of the Estate of Cecily Joan Mitchell, Newcastle West, N.S.W. p. 52

[2] Cross, Joseph. Map of the River Hunter, and its branches [cartographic material]1828