Use the Search Box above to find your Hunter Valley Ancestor.
It is over two hundred years since convict artist Joseph Lycett returned to England, having served seven years of his sentence in the Australian colonies.

Although he remained in Australia only seven years, by the time he died in England in 1828 he was a convicted criminal several times over. He could never have imagined the accolades his art work would one day bring, nor that it would become such a significant and unique record of colonial Australia.

A Life of Crime

Joseph Lycett was born in Staffordshire in 1774. He trained as a miniature and portrait painter but fell foul of the law when he turned his talents to producing forged notes.

Shrewsbury prison is situated on the bank of the river, on a dry gravelly soil on the southeast side of town, in the immediate vicinity of. the castle, and is spacious, airy, well supplied with water, and as comfortable as these abodes of human misfortune and depravity possibly can be. The entrance is through a free stone gateway, having a lodge on each side, over the arch of which is a line bust of Howard, presented by the late Rowland Hunt, and Thomas Knight, esquires, two county magistrates.

There are reception cells in the lodges the examination of the persons by the surgeon previous to their being lodged in their different apartments; during their continuance in the prison, criminals wear a woollen jacket, waistcoat and cap composed of blue and yellow stripes before conviction, after which the dress is changed for one of brown and yellow. All executions take place on the flat roof of the northern lodge, when all the criminals are brought into the area before the governor's house to witness the awful scene. This house, in which is an apartment for the magistrates, faces the entrance gate, in the centre of the front of the prison.

The chapel, which is a neat octagonal structure, well calculated for the important purposes of its erection, stands ii the centre of the whole building, and is so arranged that every class of prisoners is separated and hid from each other, though all may see the officiating clergyman. The prison, the boundary wall of which encloses two acres of ground, and is 16 feet high, is divided into four principal courts, besides smaller ones, and not only are the sexes separated, but each description of prisoners are subdivided into classes, which have each their respective courts and day rooms. The debtors' rooms are airy and comfortable, commanding many pleasing views of the adjacent country. At the eastern extremity is the infirmary, near which the under keeper resides.

In August 1812 Joseph Lycett was sent from Shrewsbury to the prison hulk Perseus at Portsmouth where he remained for twelve months. Although some of the prisoners in the Perseus were sent on the earlier vessel the Earl Spencer, Joseph Lycett to his misfortune, was kept until the General Hewitt set sail in August 1813. [2] The reason for this is unclear.

There was a great loss of life on the General Hewitt. In 1814 the convicts were not under the superintendence of any person belonging to government. In 1814 new regulations were instigated, however when the General Hewitt departed England she sailed under the old regulations. In 1819 Edward Foord Bromley gave evidence before a Select Committee on the conditions on the General Hewitt. He attributed the sickness and great loss of life to the improper treatment of the prisoners on board the ship. Bromley told of the provisions having been purchased by the master, who had the entire charge and superintendence of the convicts, at Rio de Janeiro. The master bartered spirits he purchased at Rio for the prisoner's provisions. The prisoners went days and possibly weeks without animal food, which they had bartered to the master for spirits.

Joseph's wife Mary Lycett was tried at the same time at Shrewsbury and found not guilty. She is said to have arrived as a free passenger on the Northampton in 1815.[1] Joseph's 11 year old daughter Mary Ann Lycett came on the Wanstead as a free passenger in August 1813.[3]

The General Hewitt with 266 prisoners arrived in Port Jackson on 7th February 1814. Within fifteen months Joseph Lycett had been arrested again. With his accomplice Henry Dale he was charged with forgery in May 1815.

The Sydney Gazette reported the circumstances of their crime on 3rd June 1815..

The Detection of Forgeries has in a great measure occupied the business of the Police Office for the last 10 days; and we are happy to report that from the patient perseverance of the Police Magistrate and the activity of his subordinates many discoveries have taken place in which the Public are materially interested. Among those in custody in the multifarious charges is a Mr. Lycett, who, unfortunately for the world as well as himself, had obtained sufficient knowledge of the graphic art to aid him in the practice of deception, in which he has outdone most of his predecessors. The bills of Mr. Thrupp he has imitated by a means that had not in this Colony been before resorted to by the ingenious.

The printing type used in such bills had been so well imitated in copper plate as to deceive the eye upon a slight glance, but when examined somewhat nearly not only the letters were found to disagree in size with each other, but there was not that indention on the back which the printing type leaves, and which had in a great measure served as a criterion for judging between a good and a bad bill. To obviate this difficulty the ingenious professor suggested the plan of sinking a block of brass, and leaving the letter prominent, by which means the indention of actual type would be imitated, and for a moment stagger the conception of the nicest judges. In concert with a man of the name of Henry Dale he set up business, and in the course of a few days several hundreds of these forgeries (of 5s bills) were passed about the town. So impudent was the passer off Dale, that it is affirmed he in the course of one day paid away 25 at one house ; the alarm was soon made general; and Mr. Dale was taken up on the charge of passing them.

As soon as detected the sinner shewed a readiness to become a saint by making an honest confession of his dishonest acts; in doing which his unhappy colleague was of course drawn in, and also evinced a desire of confessing his crimes, hoping from thence a mitigation of their penalty. In the possession of Lycett was found a copper plate press in miniature, just of sufficient size to imitate the bills in circulation. The block of brass from which Mr. Thrupp's bills were impressed, he at first declared he had destroyed; but as the Magistrate of Police had reason to believe the contrary, he found means to wrest it from his possession. What could be his motive for keeping it secreted after acknowledging to the fact is scarcely to be comprehended. To the culprit Dale the disclosure of these frauds has been more than commonly important, as it has involved him in charges of the most heinous complexion. Though comfortably and comparatively respectably circumstanced by his admission to a subordinate clerkship in the Police Office itself, yet he appears to have formed a connexion with an unhappy felon in the gaol gang, whom, he made instrumental in most of his robberies. He has published his declaration likewise, by which other agents are implicated; and thus has a little new banditti been blighted as it budden, and directed the thanks of the Colony to the energy of its Police.

Joseph Lycett and Henry Dale were sent to Newcastle penal settlement on the Lady Nelson with nine other convicts on 8th July 1815. 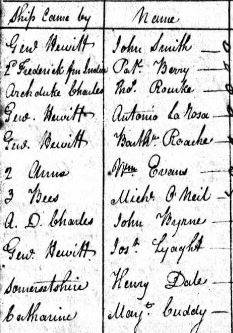 
Commandant at Newcastle in July 1815 was Lieutenant Thomas Thompson of the 46th regiment. Instructions were sent to Lieutenant Thompson from Headquarters that Lycett was to be strictly watched because of his inclination to commit forgery. It is likely that he was kept to hard labour when he first arrived, perhaps carting coal or working around the wharf.

Later when Captain James Wallis replaced Captain Thompson, Lycett came into favour when his artistic talents were recognised. He was trusted by Wallis and permitted to travel to Sydney on government business. It is curious that he was wounded by Port Stephens natives in 1817.

Captain Wallis' correspondence on the subject gives no clue as to the reason for Lycett's presence in the Port Stephens district, however he was probably using his artistic skills rather than timber getting. 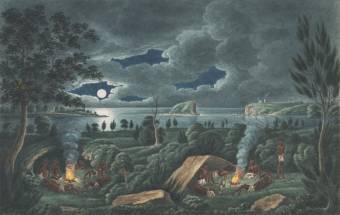 By the time Joseph Lycett was granted an absolute pardon on 28 November 1821, his hair had turned to silver. His complexion was dark and ruddy, perhaps from his many outdoor excursions.[4] He returned to England on the Shipley the following year. His daughters Mary Ann and Hannah accompanied him[3].


On Saturday afternoon the constables of the town accompanied by Mr. Redfern, prison keeper, proceeded to the house of an engraver, named Joseph Lycett in Bath row, who was suspected of being implicated in the several forgeries of local bank notes which have lately appeared in the neighbourhood. After making some inquiry, the officers went up stairs, accompanied by Lycett, who no doubt alarmed at the consequences likely to result, seized the opportunity of attempting self destruction, by cutting his throat upon the stairs, and rushing into the chamber, endeavoured to throw himself on the bed. He wounded himself severely near the jugular vein and bled profusely. In the room was found a portable copper plate press, with rolls complete; a newly engraved plate of Stourbridge and Bromgrove Bank with a facsimile of the signature, etc. He was immediately conveyed to the Hospital and there is every expectation that he will recover from the effects of the wound. His daughter who was found with him in the house, is in custody.

Henry Dale, Lycett's partner in crime in Sydney in 1815 seems never to have left Newcastle. He was employed as gaoler at Newcastle gaol until his death in 1819. Commandant James Thomas Morisset at the time described him as having been a trusty, well behaved man who would be difficult to replace.

1). Views in Australia, or New South Wales and Van Diemen's Land Delineated 1824-5. Published from July 1824 by J. Souter in London was acquired by the Newcastle Art Gallery in 2012. The book contains forty-eight hand coloured aquatint views and descriptions of the emerging colony. Sydney Harbour, the colonial settlements of Parramatta, Windsor and Tasmania and two detailed maps of New South Wales and Van Diemen's Land are featured. The three plates relating to the early Newcastle region are of the construction of the breakwater to Nobby's Point; Lake Patterson, near Patterson's Plains, Hunter's River and Sugar Loaf Mountain.

2). One of the items of considerable significance in the National Library's Pictures Collection is the bound volume commonly referred to as The Lycett Album. It contains twenty watercolours painted prior to 1828 by Joseph Lycett.