The Canada arrived in Portsmouth 20th May 1801 and departed Spithead in convoy with the Nile and the Minorca on 21st June 1801. They sailed via Rio de Janeiro. - Advantages of Various Routes of Convict Ships

and twelve female passengers including Mary Pitt and 11 children. 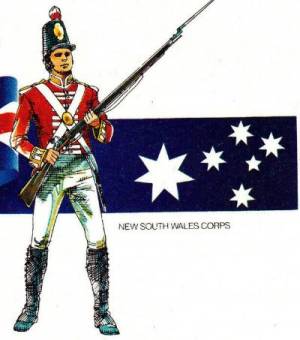 ...Soldier of the NSW Corp

Sixteen men of the NSW Corp formed the military guard and were accompanied by three women and their children.

Infantry. IV. It is represented by our Clothing Board, that the breeches furnished as regimental clothing are made of materials inferior in quality and ill calculated to stand hard service on long marches: that the annual delivery of a waistcoat front to soldiers in Europe and North America, is attended with less comfort to the men, than the practice of delivering a complete waistcoat with sleeves, which has been adopted in the West Indies: and that, although a very great and acknowledged advantage is derived to the service from the delivery of shoes under the inspection of the Clothing Board, yet that the arrangement in its present form is liable to objection in two points of view; inasmuch as, in the case of regiments at home, the colonels, not having the means of making prompt payment for the shoes which they supply, are under the necessity of delivering to their regiments, an article of an inferior quality to that which the men can themselves purchase at the same, perhaps at a lower, price, for their ready money; and as, in the case of regiments abroad, the colonels experience great difficulty, and frequently losses, in recovering from the soldiers that portion of the cost of shoes, which, according to the regulation hitherto in force, each individual is to repay to his colonel. In order, therefore, to remedy these evils, we are pleased to direct, that the clothing of our corps of infantry shall in future consist of the articles under-mentioned...

Convicts Embarking on the Canada and Minorca

Convict James Hardy Vaux arrived in the colony on the Minorca. The Canada was mentioned in the Literary Gazette in a review of his Memoirs: -

In May 1801, after an almost fatal attack of the gaol fever, his father, mother, and sisters took a final leave of him, and he was removed to Gravesend, and put on board the Minorca transport, which lay there with the Canada and Nile bound to Port Jackson. We dare say it will be new to the majority of our readers to learn how persons in this situation are treated ; and as the subject has just been raised in the House of Commons, it acquires greater importance. -

'Having entered the ship, we were all indiscriminately stripped (according to indispensable custom,) and were saluted with several buckets of salt-water, thrown over our heads by a boatswain's-mate. After undergoing this watery ordeal, we were compelled to put on a suit of slop-clothing. Our own apparel, though good in kind, being thrown overboard. We were then double-ironed, and put between -decks, where we selected such births, for sleeping, etc. as each thought most eligible. The next day, we received on board forty-six more prisoners from the Hulks at Woolwich, and the Canada fifty. The Nile also took on board one hundred women, from the different gaols in Great Britain. The three ships then sailed for Spithead where, on our arrival, the Minorca and Canada had their numbers augmented, from the Hulks at Portsmouth, to one hundred men each. Everything being now in readiness, we only waited for the convoy to assemble, with which we were to proceed to a certain latitude. - Literary Gazette - From the Memoirs of James Hardy Vaux

The Canada arrived in Port Jackson on 14 December 1801.

Governor King in correspondence to the Transport Commissioners in February 1802 reported that the convicts of the Canada, Nile and Minorca transports were paid great attention by the Masters of those ships and all were landed in high health and fit for immediate labour.

In correspondence to the Duke of Portland Governor King noted that the indents of the convicts of the Canada and Nile were not sent in the ships. Of the settlers he remarked that some of them had settled and situations were being sought for the rest however - I fear many of them will prove of the description of those mentioned in my despatch sent by way of China. Every means shall be used to make them useful to themselves, and as little as possible burthensome to the public.[2]

1). Colonial Artist John Eyre was transported on the Canada. John Eyre was sentenced to seven years' transportation for housebreaking. After three years in the colony, he received a conditional pardon and began work as an artist soon afterwards. He created naval charts for Governor Bligh and was also employed in more mundane artistic tasks, including painting numbers on the sides of buildings and painting offices. Select here to find other convict artists.

2). Ralph Summers arrived as a convict on the Canada having been tried at Lancaster in January 1797. He was later sent to Newcastle penal settlement for a colonial crime.

4). Isaac Mason who arrived free on the Canada was employed as Clerk in St. James Parish in 1825.

5). Five convict ships arrived in New South Wales in 1801 - Anne, Earl Cornwallis, Canada, Minorca and Nile.
6). Joseph Samuel was tried at the Old Bailey on 20 May 1795 and sentenced to 7 years transportation. He was 14 years old. David Dickenson Mann refers to him in The Present Picture of New South Wales in 1811....

In the month of September (1803), Joseph Samuels, who had been convicted of a burglary, was three times suspended: the rope first broke, in a very singular manner, in the middle, and the suffering criminal fell prostrate on the ground; on the second attempt, the cord unrove at the fastening, and he again came to the ground; a third trial was attended with no better success, for at the moment when he was launched off, the cord again snapped in twain. Thomas Smyth, esq. the provost-marshal, taking compassion on his protracted sufferings, stayed the further progress of the execution, and rode immediately to the governor, to whom he feelingly represented these extraordinary circumstances, and his excellency was pleased to extend his majesty's mercy. Samuels was afterwards transported to another settlement, in consequence of his continuance in his dishonest career, and has subsequently lost his life on the coast, in making an attempt to escape from the colony.

[3] The Regimental Companion: Containing the Pay, Allowances and ..., Volume 2 By Charles James