George Jackson Frankland was master of the ship Anne. He married Sarah Jackson in North Allerton, York in October 1822 shortly before departing for the colonies [1].

A son George was born to George and Sarah Frankland in 1823.

George Jackson Frankland was later granted 2000 acres of land in New South Wales. He applied to have convicts assigned to him and in 1824 Thomas Connor who had arrived on the Isabella was to be victualled from the stores at Newcastle for six months. George Frankland was living in Parramatta at this time.

Later in 1824 George Frankland, his wife and child were being supplied from the government stores from Newcastle. He had selected land 4 miles above Paterson between the grants of Edward and John Cory. Here a dwelling was constructed and named Vineyard Cottage. It contained 2 parlours, 3 bedrooms, cellars and offices.

Early in 1825 George Frankland was recommending to the Government that John Hillier be granted land. John Hillier was a leasee of the Ship Inn in Newcastle, one of the two Inns operating in the first few years after the town was opened for settlement. 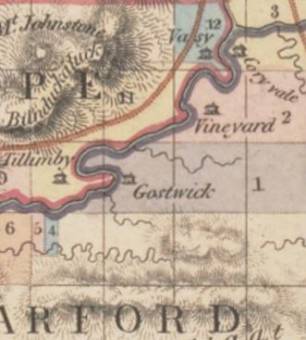 Later that year George Frankland accompanied settlers John Boughton and Edward Cory in pursuit of bushrangers in the district including the notorious Edward McCabe as well as the gang known as Jacob's Irish Brigade.

His suggestion that young unmarried men should volunteer to pursue the bushrangers leaving married men to protect their families was not unreasonable as a women had already been raped, but it brought down on his head stinging criticism which implied that he was a coward. He had little time left in the world to correct the damage to his reputation but published the following correspondence in The Australian in November 1825 ....

To the Editors of The Australian.
Gentlemen.
I have been informed by a friend of a paragraph in your Newspaper asserting my unwillingness to pursue the bushrangers, as I had a family to protect, whilst Mr. Cory, with a family of eight children bravely followed them. This might be received by some with much disadvantage to myself; and, I trust you will in justice, correct the error. I never refused to follow the bushrangers, and Mr. Cory has no child; that he bravely followed them - I am not aware at what distance: but that he would do so, if required, I believe. In January 1824 my huts were robbed of some trifling articles, and my tent attempted by four bushrangers. I sent to Mr. Cory, early the following morning, and we traced them by means of blacks; at length we overtook four armed men and succeeded in taking two; one of whom. I believe is the notorious M'Cabe. The other two made their escape. Mr. Cory wounded McCabe, and fortunately for us their arms were not in order. The above assertion accompanied by
Captain Gillman's letter inclosed, will, perhaps, prove to the public I was not afraid to follow bushrangers; although I might 'have expressed myself that the young unmarried men ought to take the lead, and the married with families stay at home: for what man would like to leave His wife exposed to violation and every insult, and would not resist it with his last blood.

I am Gentlemen, your most obedient servant, George -J. Frankland.

In December 1825 George Frankland died in Sydney having suffered three bouts of fever said to have been exacerbated by anxiety. He was 33 years of age and his son George was just two years old.

By January of 1826 his house and land were being advertised in the Sydney Gazette to be let for seven years.
As can be seen from the notice below Edward G. Cory was occupying Vineyard Cottage by 1829 while his house 'Gostwyck' was being constructed. Later Vineyard Cottage was to become an Inn, one of the first in the area. The image below shows a watermill on the banks of the Paterson with a two story house behind it, probably Vineyard Cottage. 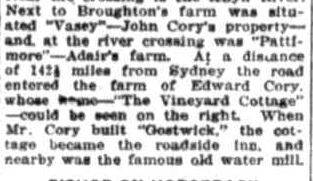 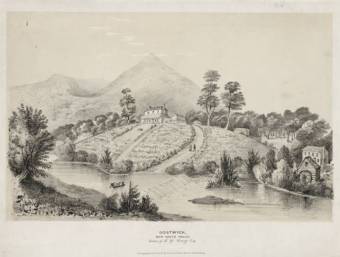 
Vineyard Cottage Farm was advertised in the Maitland Mercury in August 1855. It was occupied by Henry Boyce and there were 70 acres of arable land and 2000 acres of grazing land. Interested parties could contact Gilbert Cory of Vacy or G. Frankland of Sydney.

Sarah Frankland returned to England where she died in 1881.

Death of Sarah Frankland in England

In the obituary columns of your issue of the 21st April, appeared the following announcement:-

The death of this lady, as an old colonist, and one of the earliest settlers in the Paterson River, calls for more than a mere passing notice. The late Mrs. Frankland was born at Northallerton, in the vale of Mowbray, Yorkshire, in March, 1794; consequently at the time of her death in April last, she had entered upon her 88th year. She married George Jackson Frankland in 1822, and arrived with her husband, the captain and owner of the ship Ann, in Port Jackson, in August or September, 1823, shortly before the birth of their son George J. Frankland (now of Mowbray).

Relinquishing the sea Mr. Frankland took possession of his grant on the Paterson River, now known as Mowbray, formerly as Vineyard, Mrs. Frankland resided at Parramatta during the time her husband was engaged in erecting a dwelling at Vineyard. One of the chief objects Mr. Frankland had in settling on his grant was to cultivate the grape and he it was who introduced the first vine into the Paterson district. At this time no land was taken up beyond Vineyard, and the blacks were very numerous; cedar and rosewood abounded on the property, and Mr. Frankland had large quantities cut and forwarded to England. At this time roads were unmade, the river being the only means of access to the lower parts of the district.

During a visit to Sydney Mr. Frankland was seized with fever, and died after a few days' illness. Consequently his widow, the subject of this notice, returned to England in 1826 with her children, and remained there during the rest of her life, leaving the management of her affairs in the hands of her kind friend Mr J. P. Webber, of Tocal including the stock of cattle and sheep who, on disposing of Tocal, handed over the trust to the late Mr. Alexander Park, who retained the supervision until the arrival of the present occupant of Mowbray in the colony, in 1844, previous to which Mr. Park disposed of the stock, at remunerative prices.

His administration of the affairs was marked throughout with sterling ability. It will thus be seen that the late Mrs. Frankland was the oldest survivor of the first Paterson settlers. She always took a warm interest in the astonishing progress of the colony. She retained her faculties up to the last, but unfortunately was not spared to welcome her eldest grand-child, who at the time of her death was on her way to England, to be a companion and comfort to her in her declining days, having left the colony by the Parramatta for that purpose on her last trip.

Mrs. Frankland's second son, a medical man, resided with his mother at Ripon until his death in 1879. By his death the old lady became very desolate, her other two remaining sons being in Australia ; and it was chiefly for the purpose of enlivening again the spirit of the old lady that Miss Frankland left her paternal home on her message of love. By telegram we learn that the Parramatta reached England on the 29th April, so that Miss Frankland reached England fourteen days only after the death of her grandmother.

[1]. The History and Antiquities of North Allerton, in the County of York - Marriages