The William Pitt came down the River from Deal on 2nd July 1805 and anchored at Portsmouth. [7]

On Monday 8th July 1805, Ann Thompson, Lucy Gardner, Rachael Robinson, Jane Butterworth, Alice Scholfield, Catherine Frazier, Ann Hughes, Mary Lees, Ellen Mackintosh and Even Hodgson were removed from the Lancaster Castle prison in order to be embarked on the William Pitt lying at Portsmouth. [9] On the same day, at Norwich, Barbara Surman (Suringham), from the County Gaol and Priscilla Medcalf from the City Gaol were conveyed to Portsmouth for the same purpose. [8]

On Saturday afternoon 13th July, twenty five female convicts were removed in two wagons from Newgate prison also to be embarked on the William Pitt. Their behaviour was highly indecorous, and they tore the tilt off the wagon, kindly intended to conceal their shame, and rent the air with the most horrid expressions. [12]

Also among the prisoners was a woman from York and her daughter from Newcastle, convicted of theft. They had not met for some time till they embarked on board the ship. [13]

Mary Wade was tried in Somerset - At the late Bath sessions Mary Wade was convicted of robbing her master John Fowell Esq., of that city, of a silver spoon. Mr. Ackland, the chairman, expatiated on the aggravation of the offence, where ingratitude and breach of faith were added to the crime of theft; and said that every instance of the kind should be punished with the utmost rigour of the law - he therefore sentenced her to 7 years transportation.[1]

Henry Perfect, who was convicted of obtaining money from the Earl of Clarendon, under pretence of its being for the relief of a distressed female, was the only male prisoner sent by the William Pitt. [2] The Hampshire Chronicle noted the unusual circumstances.....It is mentioned that in the William Pitt transport there are 120 female convicts, and one man, named Perfect. Perfection may be very desirable to the female eye, but he must be a fortunate fellow indeed if he can keep on good terms with 120 ladies of this description. [6] More about Henry Perfect here.

It was reported that the Volunteers from the Royal Veterans boarded the William Pitt On Friday 12th July 1806. [10]

Gregory Blaxland later complained to the Transport Board of the 'exceedingly bad treatment' he received at the hand of Captain Boyce whom he also accused of bribery. 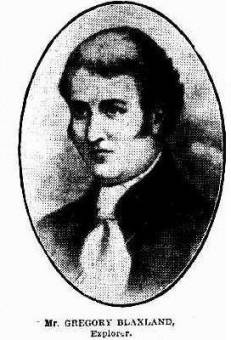 The Bury and Norwich Post reported on 17th July...With the outward bound East India fleet, which are under orders to sail this morning, are going out two large vessels for Botany Bay. One named the Laurel, is fitted for the male convicts, and has a detachment of the 8th Royal Veteran Battalion on board. The other is the William Pitt, and is fitted for the accommodation of female convicts, and free settlers. Of the former description there are a greater number and some of them of the most nefarious characters this country ever produced. [11]

It was reported that The East India fleet, under convoy of 13 of his Majesty's ships departed from Cork on 31st August 1805. Also departing Cork on this day was the Tellicherry with Irish prisoners for New South Wales.

The William Pitt called at Madeira on 1st October and remained three days and stopped at San Salvadore for three weeks.

The ships log for the 8th January records that constant firing of cannon and musketry of the English and Dutch armies could be heard.; The William Pitt remained at the Cape five weeks during which time the prisoners may have been disembarked and held on shore. (Bateson, Charles, Log of the William Pitt (Log 184G, Commonwealth Relations Office, London). 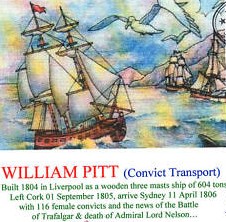 Although the he Tellicherry departed Cork at the same time the William Pitt was nearly two months longer on her voyage. The William Pitt reached Port Jackson on 11 April 1806 with one hundred and seventeen female prisoners who all arrived in a state of good health.

A quantity of tea and also seeds arrived on the William Pitt. None of the seeds received on the William Pitt germinated due to the heat of the ship's hold in which they were stowed. Governor King with barely concealed annoyance, later recommended that seeds be sent in packets rather than casks and be regularly aired. Some of the items that were supposed to have been sent were taken out of the vessel in Portsmouth by orders of the Transport Board. They included 10 casks of hats; 15 casks of shoes; 6 bales of shirts; 30 bales of clothing; 3 puncheons of barley; 8 puncheons of wheat and 6 bales of stockings. In addition many of the bales of slop clothing were much damaged on the voyage.

John Boyce was intending to leave the colony in the William Pitt by May 1806, however the vessel was still under repair on 25th May and did not quit the Cove until 1st June 1806. [5] It was reported that she was to touch at Port Dalrymple on her way to China. [14]

On board the William Pitt when she departed Port Jackson were three female convicts Mary Oakley, Diana Bent and Rose Sabin. They were disembarked at Port Dalrymple. Rose Sabin had been convicted of stealing shirts and sheets from Capt William Limbery RN. She was convicted at Kent assizes to seven years transportation on 12 March 1804. Email contributor.

Diana Bent was tried at Hereford on 13 March 1804 and sentenced to transportation for life. Mary Oakley was tried at Southampton Assizes

The William Pitt arrived at Canton on 3 October 1806

1). Online records of the Old Sydney Burial Ground - John Muirhead who had been Mate on the William Pitt died on 9th June 1806.

3). Convict Lucy Vaughan arrived on the William Pitt. She later entered into a relationship with James Squires.

7). Hunter Valley convicts and passengers arriving on the William Pitt in 1806: