The Tellicherry was the next convict ship to leave Ireland bound for New South Wales after the departure of the Rolla in November 1802. The convicts transported on the Tellicherry came from districts throughout Ireland.

Finn's Leinster Journal reported on 22 June 1805 of the convicts lying in Kilkenny Gaol, under sentence of transportation who were sent off to Cork the previous week; and those from Carlow and Maryborough passed through for the same place a few days later.

Amongst the men to be embarked were political prisoners who had been involved in the rebellion....

A reward of &pound500 was proclaimed for the person of the noted plundering mountaineer Dwyer, who, with some other desperadoes had for a considerable time, in defiance of the police and military, carried on a depredatory system from the Wicklow mountains. For some time, either from fear or sympathy the inhabitants of the mountains gave them aid and protection: they however soon began to render themselves obnoxious by levying contributions upon the mountaineers for their subsistence. Dwyer's wife was particularly active in these collections.

Dwyer at last, with four of his principal associates, namely, Martin Burke, John Mernagh, Hugh Byrne and Arthur Devlin, surrendered to Mr. Hume on condition, that they should be immediately sent to North America. They were however kept contrary to these conditions for about 2 years in Kilmainham during which period they made frequent vain complaints of the violation, of the faith of Government, and of the hardship and duration of their confinement [3]

Of the prisoners on the Tellicherry, twenty-nine men had been tried in County Dublin and twenty-two in the city of Dublin. Some of these men were held in Kilmainham Gaol at Dublin prior to transportation on the Tellicherry.

The Belfast Newsletter carried an interesting note about the surgeon of the Tellicherry on ...Conlan, the apothecary from Dundalk, who had been an approver in 1798, and has been ever since supported by the bounty of Government, has, volunteered to go to Botany Bay with the convicts now in the river. He has, it is said, lately qualified himself to act as surgeon, and being unwilling to return to his native country, has received an appointment in the colony. [5]

The newspapers of the day reported rumours of a mutiny on board........ They sailed under convoy of Sir Home Popham as far as Madeira. The convicts had shewn themselves so obedient to rule, before they reached that island, that Captain Cozens had their irons knocked off and they were admitted by divisions to take air upon deck. Dwyer and his associates were treated rather as voluntary passengers than prisoners suffering punishment for their crimes. Some time after the Tellicherry had parted convoy at Madeira, the convicts surprised the officers, who, according to report, they murdered and ran the vessel on shore in a bay to the southward of All Saints. We understand that Sir H. Popham's squadron upon its arrival at St. Salvadore, while watering there, was informed of this melancholy event by the people of the place. We trust however, that their relation is not correct. [4] There were no further reports of this mutiny.

Articles brought out included 3 pipes of Madeira wine, 10 firkins of butter, 2 bales of haberdashery, hosiery and perfumery, 1 case of men's hats, 5cwt. of soap, 10 casks of draught and 160 dozen of bottled porter, 12 boxes of mould candles and 8 boxes of window glass 10 by 12 and 12 by 14. The provisions brought for Government consisted of between 400 and 500 casks of beef and pork.

On nearing Port Jackson Captain Curzons sent in a six-oared cutter from the Tellicherry with advice to the Governor that the Tellicherry was delayed because of contrary winds. The ship finally entered the Heads the following morning, 15 February 1806.

Six prisoners died on the passage out and on the evening of arrival, thirty-one convalescents were brought on shore and received into the General Hospital at Sydney. At six the following morning boats were in readiness to take the remaining prisoners from on board and by 7a.m. they had left the ship and were ready to be conveyed to Parramatta.

One hundred and twenty-five male and 35 female prisoners arrived on the Tellicherry.' There were also six children and two women, wives of State prisoners Byrne and Dwyer. (HR NSW)

The prisoners were landed in the heat of summer and there had been no rain for almost a month. Gardens were parched and vegetables scarce, however on Friday 21st February it began to rain and there were high hopes that gardens and fields would be restored. It was in fact the beginning of what would be a catastrophic flood.

Governor King in correspondence to Secretary Marsden on 22 February 1806 wrote...By the return of the Tellicherry which arrived here the 15 instant,.....I am much gratified in reporting that, owing to the great care and humanity of Mr. Curzens, commander of that ship, the prisoners under his charge arrived in general good health, except a few cases of scurvy, which will soon disappear from the fresh diet and vegetable regiment they are under. Five male and one female prisoner died on the passage out.

The political prisoners on the Tellicherry - Michael Dwyer, John Mernagh, Hugh Byrne, Martin Burke and Arthur Devlin had been granted permission 'to banish themselves for life to avoid being brought to trial for treasonable practices.' [1]

'These men were not criminals and after their acquittal should, according to all principles of justice and right, have been liberated. They were, however, detained in prison. Dwyer was sent on board the Porpoise in chains and handcuffs like a malefactor, and transported to Norfolk Island. The others were similarly treated, and sent to different subordinate settlements. After the arrest of Bligh they were permitted to return; and Paterson in May 1809, gave to each of them a grant of 100 acres of land in the Cabramatta district. [2] 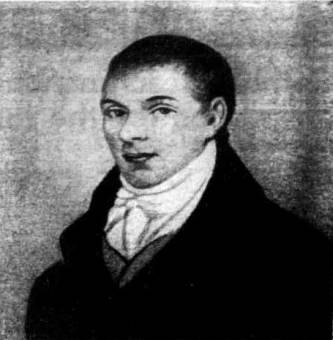 Michael Dwyer The 'Wicklow Chief'. By J. H. COLOGON - Michael Dwyer was a Captain under General Byrne, of Ballymanns, for swearing-in and marshalling the insurgents of the Wicklow Mountains during the Irish rebellion of 1798. He took part in every engagement and was second in command at Hacketstown. In the midst of the campaign he married Mary Doyle, a neighbor's daughter. One of the insurgent priests, Father John Murphy, performed the marriage and Mrs. Dwyer shared her husband's hunted life for six years. At the end of that time she went with him into exile. After the collapse of the rebellion Michael Dwyer retired to Wicklow Hills where by his daring courage, resource, and intimate knowledge of the terrain he was able to defeat regiment after regiment sent against him. Stories and legends tell of his stern methods with informers, of his own hair- breadth escapes, and of the heroic self-sacrifice of Sam McAllister, who, mortally wounded, exposed himself to the fire of the soldiers so that his leader, Dwyer, could escape while they were re- loading. - Catholic Weekly

In March 1806 Captain Curzons posted the following notice in the Sydney Gazette:

Sixty Guineas Reward!
Captain Curzons of the ship Tellicherry will pay the above Reward to any person or persons apprehended or causing to apprehended the following Seamen, Deserters from his ship; or a Reward of Twenty Guineas for each and either of the said deserters as soon as they shall be delivered into safe custory.

The Tellicherry departed Port Jackson bound for Bengal in April 1806. In February 1807, the Sydney Gazette announced that the Tellicherry had been wrecked on the coast of Laconia. The officers and crew made their way to Manilla in the ship's boats where they proceeded to China in the vessel American.

2). More about Arthur Devlin - United Irishmen, Their Lives and Times

3). Tellicherry : plans of male convict quartered, shackles and bunks, with view of ship in full sail : an artist's copy of the original done in 1806 by Robert McAllister...State Library of NSW

4). Tellicherry convicts and passengers identified in the Hunter Valley

6). Trial of Walter Clare who was found guilty of high treason and insurrection in 1803. His sentence of death was respited to transportation for life:

9). Sarah Byrne, wife of Hugh Byrne died at Campbelltown in 1872. Her obituary was published in the Freemans Journal

10). Some of the female prisoners had been incarcerated for many months already before they were embarked on the Tellicherry....

Below are their names and place and date of trial

[3] The History of Ireland from Its Union With Great Britain, in ..., Volume 1 By Francis Plowden