The female convicts who were embarked on the Princess Royal late in 1828 came from districts throughout England. They were probably held in county prisons or Newgate prior to being transferred by coach or caravan to the Princess Royal for transportation to New South Wales.

The Lord Melville and the Princess Royal departed England on the 5th and 6th January 1829 respectively. [2]

This was Andrew Douglas Wilson's first voyage as surgeon superintendent on a convict ship. Later he was surgeon the Lady Feversham in 1830 and the Asia in 1832.

I might properly be deemed guilty of negligence in not forwarding to the Board a fair copy of this journal but I am sure I shall be fairly exonerated from any such charge when I explain that I have in a great measure been confined to my bed ever since leaving Sydney (a period of 12 days) and that I am at this moment a fit patient for one of their Majesty's Hospitals.

At the same time I take leave to remark that few of the cases would appear of much importance, even by selection, although all were of consequence on the spot. The case of epilepsy was attended with some anomalous symptoms and excited anxiety. At last I found out it was caused in that particular convict by her drinking rum to excess which was stolen and given her by some of the sailors. On two or three occasions the fits were really alarming and from their occurrence in the most unaccountable way and at the most unexpected times, I was at a loss what to think of the case. There were appearances of inebriation but no reasonable grounds for such a conclusion, as the attainment of spirits was considered impossible. Ultimately however a sharp look out and a little jealousy among the convicts themselves brought this fact to light. The patient was a heartless woman, gave much trouble and in that was most ungrateful but such are female convicts generally. They expect as a matter of right to be waited upon as ladies and nursed like children, otherwise the surgeon may anticipate being threatened with a complaint against him to Mr. Capper or Governor Darling. [1]

Andrew Wilson became ill again in 1832 when he was employed as surgeon superintendent on the Asia. He attributed his illness to a fall he had on the Princess Royal in which his skull had been damaged. He was so ill on the voyage of the Asia that on arrival in Sydney he had to be hoisted out of the ship in a chair. The disease was mainly in his hip but had since spread to almost every part of his body and confined him to bed.

Passengers arriving on the Princess Royal included Stephen Owen and Mr. Baldy of the Commissariat; G.C. Stapleton of the Surveyor's Department and steerage passenger Tabitha Buckman servant to Mr. Owen.

Stephen Owen published his Memoirs in 1880 in which he makes a brief mention of his voyage and the loss of his first born child on board....

For about two years I was unemployed, seeking the restoration of my health, and during the interval I married Rachel Fletcher of Liverpool, making no mistake as to the object of my affections, but very seriously forgetful of ways and means, for which I have paid the usual penalty. I take to myself the entire blame of this imprudence, as she who became my wife would have been quite willing to wait until proper provision was made for the expense consequent on such an engagement. However, being in for it, I sought employment, and as there was no hope at that time of my enjoying in the atmosphere of London such a state of health as would enable me to attend to business, and the climate of Australia being favourably reported on, I accepted an appointment in the Commissariat of New South Wales, and embarking at Gravesend with wife and infant, 10th November, we reached Sydney and disembarked on 9th of May 1829, just six calendar months on board. Stephen Owen was stationed at
Moreton Bay from 1834 to 1839. His wife Rachel died at Moreton Bay in 1839 and he was left to bring up their four children alone. Contact descendant Gregg Barr for more information. Select here to read Stephen Owen's Memoirs at Trove

The Princess Royal arrived in Sydney on 9th May 1829 with 100 female prisoners and seven children. There were no deaths of convicts and most of the illnesses were trivial. The children belonged to Margaret Coffin, Margaret Hartigan, Susan King, Sarah Pitches, Margaret Morony, Caroline Thomas and Susannah Watson.

All the women were mustered on board the vessel on 12th May by the Colonial Secretary Alexander McLeay. The convict indents include name, age, religion, education, marital status, family, native place, offence, date and place of trial, sentence, prior convictions, physical descriptions and to whom assigned on arrival. There is also occasional information regarding deaths, pardons, colonial crimes and relatives already in the colony.

The youngest on board was Ann Storrett who was only 15 years old. Isabella Errington was the oldest at 48 years of age. Their crimes were mostly various forms of stealing. One prisoner, Margaret Hartigan was convicted of manslaughter. About twenty six of the women have been identified residing in the Hunter Valley region in the following years. Select HERE to find out more about these women. 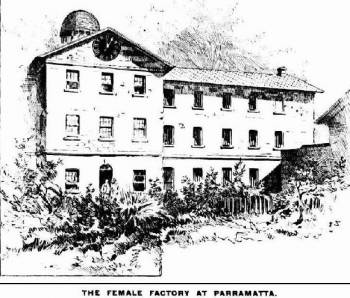 The Australian commented when the women were disembarked - The Princess Royal has brought a fresh re-inforcement of women to the Colony - On the whole, these are the best sort of cargoes just now if nuptial intercommunication of the sexes was but properly encouraged.

On the 21st May 1829, Andrew D. Wilson reported that all the convicts had been disembarked early that morning. The women were all assigned with the exception of Sarah Piper and Sarah Clarke, who from the bad state of their health were sent to the Factory at Parramatta.

In June the Sydney Gazette reported of an unusual circumstance involving the seamen of the Princess Royal ......

A conspiracy of a very dangerous character was entered into by part of the crew of the ship Princess Royal, which conveyed female prisoners to this Colony some time since, but fortunately has been detected and counteracted. Owing, it is supposed, to an understanding between the seamen and the frail fair ones on the voyage, the former formed the resolution, if possible, to remain in this land of promise, at least for some time longer, and in order to attain their object, a plan was concocted according to which it was resolved to abscond, and to represent the ship as not sea worthy. The Commander, deserted thus by nearly his whole crew, at the very moment he was about to proceed on his voyage, and being informed of the report that had been raised respecting his vessel, came to the very proper resolution of calling a Board of Survey, in order that they might report upon her actual condition.

The Board consisted of Captain Lawes, of H.M.A.S. Satellite, the Commander of the Swiftsure, and Mr. Nicholson the Master Attendant, all of whom, after a minute examination, pronounced the ship to be perfectly fit for sea in every respect. A report of the men who had absconded was then made to the Superintendent of Police, by whom apprehending warrants were immediately issued, and the parties brought before the Bench to answer to the charge preferred against them. Being put upon their defence, they still persisted in declaring that the ship's timbers were rotten; one asserted that he would not trust his old shoes in her outside the heads, and another that he was not going to sea in a basket. The Bench, however, warned the defendants of the situation in which they were placed, they being not only liable to be sent to the House of Correction for neglect of duty, but to forfeiture all wages under the ship's articles.

After some little hesitation, the Magistrates' account of the penalties they were incurring by persisting in disobeying the orders of the Captain, seemed to induce them to alter their opinion of the state of the good ship Princess Royal, and they consented to return to their duty on board, where they were directed to be immediately transmitted, after receiving a severe reprimand from the Bench.

Convicts of the Princess Royal identified in the Hunter Valley -

1). The Princess Royal was one of twenty-one convict ships arriving in New South Wales in 1829. Four of these carried female prisoners the Princess Royal, Edward, Lucy Davidson and the Sovereign. A total of 492 women arrived as convicts in 1829.

2). National Archives. Reference: ADM 101/62/1 Description: Medical journal of the Princess Royal, female convict ship from 30 September 1828 to 24 May 1829 by Andrew Douglas Wilson, Surgeon and Superintendent, during which time the ship was employed on voyage to New South Wales