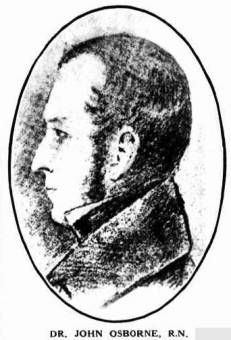 There were no prisoners on the Lucy Davidson who had been convicted in Scotland and although all the women were tried England and Wales, twenty of them had been born in various counties in Ireland.

The Lucy Davidson arrived at Deal from London on 16th July 1829. It was reported in the Morning Post that she put back into port on 19th July and departed on 20th July. On the voyage she was in contact with the vessel Eliza Jane in latitude 30 degrees South, longitude 18 degrees West, and reported that near the equator they had been accompanied by an unknown ship for over three hours before the Lucy Davidson lost sight of them.

Lucy Davidson touched at Hobart before arriving at Port Jackson on 29 November 1829.

There were two deaths of prisoners on the voyage - Elizabeth Brickland died on 11 November from debility and Sophie Sanders on 23rd October from a burst blood vessel.

There was an outbreak of whooping cough which lasted for six weeks and caused several fatalities on the voyage. Although the last of the disease was seen on 16th September, in light of the fatal outbreak after the arrival of the Morley in 1828 the authorities were taking no chances and took the precaution of sending the Lucy Davidson into quarantine on arrival.

A muster of the remaining 99 women and twenty children was held on board by Colonial Secretary Alexander McLeay on 3rd December 1829. The Indents reveal age, education, religion, marital status, family, native place, trade, offence, when and where tried, prior convictions, sentence, physical description and where and to whom the women were assigned on arrival. There is also occasional information regarding deaths, colonial sentences and relatives already in the colony.


Notes from the Indents:

Colonists were advised in December that those families in need of female servants could be supplied from the English Prisoners who arrived in the Lucy Davidson. The women were finally landed on Wednesday 9th December 1829 and many were immediately assigned to awaiting applicants.

The Lucy Davidson sailed from Sydney for Hobart with a cargo of merchandise, arriving there on 14th January.

By early January the ladies of the Lucy Davidson had made their presence felt in Sydney.

The women who were landed from the Lucy Davidson, are so very troublesome, being continually brought before the Police Office that the Magistrates are of opinion they are the most evil-disposed crew that have been landed in the Colony for many a day!!

And from the Sydney Gazette -

The female prisoners by the Lucy Davidson have turned out but a profitless shipment. Most of the Magdalenes were assigned to service in Sydney and by far the greater portion of those, we are told have been returned by their masters to government as incorrigibly bad characters.

In February - It is an astonishing fact, that out of the entire number of female prisoners who came out in the Lucy Davidson and who were assigned to service immediately on landing not more than about a score keep their places, whilst the rest have been returned to Government and sent to the Factory.

At least four of the women of the Lucy Davidson were involved in a riot at the Parramatta Female Factory in 1831 - Ann Chapman, Eliza Davis, Ann Thew and Sarah Williams were all sentenced to transportation to a penal colony for three years for their part in the riot. They were sent to Newcastle Female Factory with twenty-four other rioters to serve their time, however most were re-assigned to settlers within the next few months.

1). William Wiseman was also Master on the convict ship Isabella in 1832

3). Prisoners and passengers of the Lucy Davidson identified in the Hunter Valley

4). The Lucy Davidson was one of twenty-one convict ships arriving in New South Wales in 1829. Four of these carried female prisoners the Lucy Davidson, Edward, Princess Royal and the Sovereign. A total of 492 women arrived as convicts in 1829.

5). Osbornes in early Illawarra (This is the text of an address delivered by Frank Osborne to the IHS on 7th November, 1996)

6). Elizabeth Hughes was tried at Warwick Lent Assizes in 1829. The following Petition has been transcribed by researcher Keith Searson in UK in conjunction with Colette McAlpine of the Female Convict Research Centre in Tasmania.....