Having been fitted up for the transportation of convicts the Morley the Guard, Surgeon-Superintendent and passengers embarked in England prior to departing for Dublin.

He was kept busy on this voyage and there is not the information of ship board routine as in the journals of the Grenada 1821 and the Recovery 1823, however all the many illnesses and their treatments are included in the Morley journal.

The Guard comprised a detachment of 57th regiment under orders of Captain Robert Hunt and Ensign Alexander together with 6 women and 6 children belonging to the troops. They embarked on the Morley in England on the 27th September 1827. Select here to find other convict ships bringing detachments of the 57th Regiment

Five sons of previously transported prisoners were given free passage.

Peter Cunningham's first patient was Rosina Smith the 18 months old daughter of a soldier, who was treated on 15th October 1827 while the ship was off the Isle of Wight on the passage to Dublin. In the following days several of the soldiers were also treated for various complaints. The vessel was in the English Channel until the 22nd October. Mary Butler, wife of a soldier and mother of a 15 month old was treated for a sore throat at this time.

There were several hard gales off the English coast however by 26th October they had arrived in Dublin harbour and the convicts had been embarked. The first convict patient was treated on the 26th October - William Wheeler, aged 36 described by Cunningham as an old soldier who had undergone many hardships. He was suffering from a violent cough however Cunningham had been told by those on the hulk that Wheeler was a great schemer and so he was disinclined to believe all that the man said. He was treated by wearing a flannel shirt, sponged in hot water, digitalis, laudanum and blisters were applied.

The Morley departed Dublin on 3 November 1827 and experienced favourable weather for most of the passage. On 13th November the surgeon's journal reported them to be at sea in latitude N41 3 Longitude W 15 28.

They touched at Tenerife to take in water on 24th November, leaving there on 27th of the same month. During the short stay at Teneriffe, the Primrose, 18 guns, Captain Griffinhoffe, and the Alert, 16 guns, Captain Burgess were also anchored there. Several of the guard were suffering from ophthalmia while at Teneriffe.

The entry for the 15th November is interesting as it relates to the convict W. Crigan who the surgeon described as of a pale sickly appearance, flabby, scrofulous habit with scars of former sores of that disease below each jaw. He was always ailing in the hulk and on 15th November presented with dysentery. The surgeon treated him successfully and when he was about to discharge him from the hospital a few weeks later, seventeen year old Crigan developed a severe cough which turned out to be pertussis (whooping cough, or as the surgeon referred to it, chin cough). The cough continued for a fortnight and at first he bore up well under the disease so that the surgeon held hopes of his recovery, however his health deteriorated until the 9th February when he passed away. Crigan had never given up hope of recovery until the last. This death occurred three months after they had departed Ireland and Port Jackson was about four weeks voyage away. On December 8th the next case of whooping cough appeared in the child of a soldier, H. Patterson aged 15 months. These were the only two cases of whooping cough recorded in the surgeon's journal. This last case of H. Patterson was discharged from the sick list cured on 12th January, two months before the ship reached Port Jackson.

By January at least thirteen of the convicts were affected by nyctalopia although none of the guard were affected. There was also an outbreak of cholera and of boils. Bilious illness existed to a greater extent than on any of Cunningham's previous voyages and catarrh to a less extent. He attributed this to the ship leaving England before the setting in of Winter and entering the southern latitudes at the commencement of summer.

Three prisoners died on the passage out and a soldier was drowned. Cunningham remarked in his journal that the two prisoners who died of phthisis had become ill as a direct result of their treatment on the hulk by fellow prisoners. One of these was John Reid whose condition came to the attention of the surgeon late in the voyage. He was described as a tall bony thin man with dark sallow complexion and always in good health until he received a beating from his fellow prisoners on the hulk when he received a kick to his right side. Being a 'backward, modest man' he never complained to the surgeon of his troubles. He died on 23rd December 1827.

The third man who died was said to be a debauched individual who suffered with liver disease. Cunningham remarked that these three were the only prisoners who died out of almost 1000 prisoners, soldiers and passengers who came to New South Wales under his care in five voyages. [1]

Conflict Amongst the Convicts

Peter Cunningham had written of the antipathy that existed between the Dublin boys, Cork boys and the North boys in Two years in New South Wales: A series of Letters comprising Sketches of the Actual State of Society in that Colony (1827)......The Irish divide themselves into three classes, namely, the Cork boys, the Dublin boys, and the North boys; and these are so zealous in upholding their respective tribes, that when two individuals of different classes quarrel, there is no possibility of arriving at the truth, since a dozen of each class will rush forward, and bawl out at once, in favour of their respective comrades, evidence of the most conflicting, contradictory nature. The North boys are commonly called Scotchmen by the others, and indeed many spoke the Scotch dialect so broadly as almost to puzzle me to unravel it.

The Morley arrived at Port Jackson on 3rd March 1828.

A muster was held on board by the Colonial Secretary Alexander McLeay on 6th March 1828. The convict indents include the name, age, education, religion, marital status, family, native place, trade, offence, date and place of trial, sentence, prior conviction and physical description. There is also occasional information regarding relatives in the colony and colonial crimes.

Thomas Gaffey William Keegan and William Taylor were discharged from the ship to the Hospital in Sydney on 10th March 1828 and the remaining prisoners were landed on 14th March 1828.

The convict indents reveal where the prisoners were assigned. - Two prisoners, John Curtis a widower aged 50 and James Jennings a soldier age 24 were both assigned to Peter Cunningham and were probably taken to Dalswinton his estate at the Hunter Valley. Four were sent to the Engineers Department and thirteen to Hyde Park Barracks. Thirty five men were sent directly to the Hunter Valley region and the rest were distributed to other settlers throughout the colony. 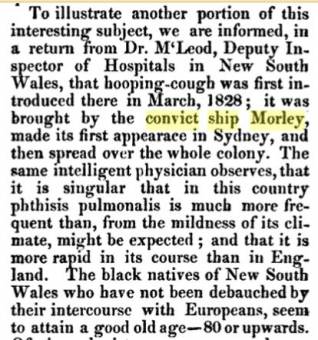 The Morley brought whooping cough to the colony with devastating consequences. Three weeks after the arrival of the Morley Governor Darling issued a Proclamation regarding quarantine in an attempt to contain the outbreak however it came too late and many children later died including Edward, the infant son of Governor Darling.

The Sydney Gazette published the Proclamation on 24th March 1828...

By His Excellency Lieutenant General Ralph Darling,
Commanding His Majesty's Forces,
Captain General, and Governor in Chief of the Territory of New South Wales and its Dependencies, and Vice Admiral of the same.

Whereas it is judged expedient, that the Schooner Alligator should be temporarily stationed or moored as a Lazaret, or Quarantine Vessel, in the Bay or Cove known by the Name of Neutral Bay, on the North Side of Port Jackson ; and that certain Children, who have recently arrived in the Ship Morley, and who are infected with the Hooping Cough, should be kept on board the said Quarantine Vessel, until the Medical Officers shall have declared it to be their Opinion that there will be no Risk of communicating the said Disease, which has been hitherto unknown in this Colony;

Now Therefore, I, the Governor, do, by Virtue of the Authority vested in Me, hereby declare the said Schooner or Vessel, called the Alligator, to be a Lazaret, or Quarantine Vessel, during the Time that she shall be so stationed or moored as aforesaid ; and I do hereby strictly prohibit all Persons whatever, from having any Communication with the said Vessel, while so stationed, without special Authority from Me, under Pain of being prosecuted with the utmost Rigour of the Law.

Given under my Hand, at Government-house, Sydney,
this Twenty second Day of March, in the Year of Our Lord One thousand eight hundred and twenty-eight,
'Ralph Darling' By His Excellency's Command

The Morley seems to be the only convict ship departing Dublin with male convicts at the end of the year 1827......... read A Romantic Tale published in the Standard in August 1827 which may be about one of the prisoners of the Morley.

Convicts of the Morley identified in the Hunter Valley


2). On the 16th May 1827, thirty six male convicts were forwarded from the County of Antrim Jail, to be put on board the transport hulk, at Kingston. They were accompanied by a military escort, under the direction of Mr. Samuel Erskine. On the succeeding Monday whilst the party was proceeding between Ashbourne and Dublin, one of the convicts, (James Whitford, who had received sentence of death at the Spring Assizes, for horse stealing, but which was commuted to transportation for life,) suddenly leaped off the hinder most cart, and took to the fields with great speed. The officer's guard of the Rifle Brigade fired several shots after him, without effect. The officer, perceiving that he could be overtaken caused the men to cease firing and he being on horseback, galloped after him. Meanwhile, Mr. S. Erskine took an angle off the line in which the convict was running, and by this maneuver overtook him in the third field. It was then discovered that the irons with which he was manacled had been cut asunder, and were cast aside on his leaping from the cart. The party arrived in security next day at Kingston. On the 11th inst. six female convicts were forwarded from our county Jail, in a securely covered caravan, under a military escort. They are also for transportation from Kingston. There are at present confined in Carrickfergus Jail, upwards of 140 prisoners. - Belfast Newsletter 22 June 1827.