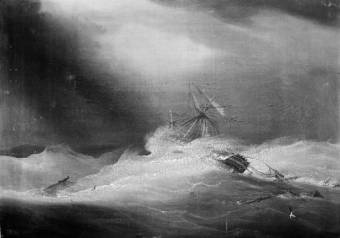 The Lady Castlereagh dismasted in a cyclone off Madras, 24 October 1818 - Royal Museum Greenwich


The Lady Castlereagh was built on the Thames in 1802.[1] Under the ownership of Henry Callender, the Lady Castlereagh made her first voyage for the East India Company to Bengal in April 1803. She made seven voyages for the Company in all, mainly to Bengal, but also to St Helena, Madras and, finally, to China. The last time she is recorded in East India Company service was in June 1817 having reached England at the end of a seventh voyage. Her final voyage was not in the service of the Company as she was contracted to the government for convict transport. [2]

The military guard consisted of a detachment of 34th, 46th and 48th regiments under orders of Lieut. Brotheridge of the 48th and Ensign Lax of 34th.

W.B. Cramp described of his voyage in 'Narrative of a Voyage to India; of a Shipwreck on board the Lady Castlereagh; and a Description of New South Wales':- .....

'I had not waited long in London, before another vacancy occurred on board His Majesty's Transport Ship Lady Castlereagh, lying at Deptford, bound to the New South Wales. Shortly after I had joined her, we sailed to Woolwich, and received on board our guard, which was composed of a detachment of his Majesty's 46th regiment of foot, and after receiving a portion of our convicts, we proceeded on our passage to Portsmouth : we received another portion from Sheerness, and in two days arrived at Portsmouth. The remainder of our prisoners not being in readiness, we were forced to bring up and moor ship a cable each way. Spithead is a spacious road for shipping, between Portsmouth and the Isle of Wight, and where they in general lie after they are in readiness for sea. I went on shore to see the town of Portsmouth. It is situated inland of Portsea; the streets are generally narrow, and-rather dirty, owing to their not being properly paved.

The Dock-yards, as there are several, resemble distinct towns, and are under a government separate from the garrison. Here is a commodious arsenal for laying up cannon, and the fortress may be justly considered as the most regular one in Great Britain. The number of men employed in the different ropeyards generally is considered to be between eight or nine hundred, and the garrison is very large. The town of Portsmouth contains about 40,000 inhabitants, and the harbour is reckoned one of the finest in the world, as there is water sufficient for the largest ships, and is so very capacious that the whole of the British navy may ride in safety. The principal branch run up to Fareham, a second to Pouchestei and a third to Portsea Bridge; besides these channels there are several rithes, or channels, where the small men of war lie at their moorings. Opposite the town is the spacious road of Spithead.

On the 20th of December we received our convicts, and the following day we made sail and passed through the Needles, which are two sharp-pointed rocks at the N. W. end of the Isle of Wight, so called from their sharp extremities. ' [3]

The Lady Castlereagh departed Portsmouth bound for Port Jackson with 300 male prisoners all in excellent health.

'The prisoners, during their voyage, behaved themselves with great propriety, considering the variety of characters which we had on board. We arrived at New South Wales on the 26th of April, 1818, after a pleasant passage.' [3](*Note - some sources state 30th April.)

Thirty-nine prisoners were landed at Port Jackson. Select here to find out more about the disembarkation of prisoners.

A further 261 men were sent to Van Diemen's Land -

'Government not being disposed to receive all our convicts, we were taken up to proceed to Van Diemen's Land, with a crew of two hundred convicts, besides a detachment of one hundred and sixty rank and file of his Majesty's 46th regiment of foot under command of Major. Bell. We sailed on the 4th May, and arrived at Van Diemen's Land after a pleasant passage of six days. After our prisoners were received on shore, they sent us another detachment of 150 rank and file of his Majesty's 46th regiment for Madras, and we began to prepare for sea.' [4]

The Lady Castlereagh departed Hobart on 26th May, and called at Sydney on her voyage to Madras where they arrived on 12th September 1818.

Six lives were lost and the Lady Castlereagh was almost wrecked in a gale on 25th October 1818. The incident is depicted in the image above and W.B. Cramp also describes the ordeal on p. 22 of his narrative.

1). Convict John Pagan arrived on the Lady Castlereagh. He was executed for murder in 1820.

2). Convict William Morris was executed for murder on 26 November 1839.

3). Charles Day who arrived on the Lady Castlereagh was sent to Newcastle penal settlement in 1820. He was one of eleven pirates who seized the cutter Eclipse from the harbour in 1825. Find out more about their audacious escape here

4). Joseph Pritchard was an incorrigible runaway. He absconded from Newcastle penal settlement with four other Pirates on the Gurnett in 1826

5). Boatswain James Burges requested permission to remain in the colony as a settler on arrival of the vessel.

6). Convicts and passengers of the Lady Castlereagh identified in the Hunter Valley

10) Lieutenant Thomas Henry Brotheridge of the 48th married Maria, the daughter of George Johnstone of Annandale in 1824. In 1825 he sailed on the Grenada in Command of a detachment of the 48th for Madras. Maria died in January 1827.....

DEATHS. (From the Madras Courier.) At Pondicherry, on the way from India to Sydney, in the night of the 25th of January, 1827, Maria, the beloved wife of Captain Brotheridge, of the 48th Regt, and second daughter of the late Col. Johnstone, of Annandale, aged 26 years; after giving birth to an infant, on the 18th, which survived only a few hours. And at Port Louis, (Isle of France), in the night of the 24th June, 1827; George Thomas, the eldest son of the above Thomas and Maria, aged two years and a half. (SG 3 october 1827) Thomas Brotheridge returned to Australia on the Lord Rodney. He died in October 1827... ........With a broken constitution, the Captain returned to Sydney and retired to the family estate where he lingered until last Thursday when he joined his amiable wife and child'. BROTHERIDGE, a Gentleman long-resident in the Colony, and greatly esteemed by all who knew him. There is something deeply melancholy in the premature death of this Gentleman. He himself was in the full vigour of manhood, bidding fair to live to an old age. His late spouse (Miss Johnston of Annandale) was also in the bloom of life. She, her husband, and one of two beautiful children, are all suddenly found asleep in the arms of death....... (The Monitor 29 October 1827)

Following is a description of Thomas Brotheridge....from An Eloquent Soldier: The Peninsular War Journals of Lieutenant Charles Crowe, By Gareth Glover........

I also found here Lieutenant Brotheridge of our regiment. He was the first officer I knew when I joined at Northampton where he used to amuse me in our walks with him desperately long yarns, relative to the battle of Albuera, the only one he ever saw!. of his being taken prisoner, his making his escape the same night by jumping out of a window of a large house in which he and the other prisoners were confined. Tom never forgot this sprain, but ever after had a knowing limp in his gait, with which and his swaggering roll, his large cocked hat fore and aft, strapped like a brigade major's, and a long Staff officer's feather dangling behind, Tom Brotheridge used to cut a desperate swell in the town.