The Isabella was a brand new ship, having been built on the Thames in 1818. [4] She was owned by William Wiseman, Patrick Chalmers and James Wallace. At 579 tons she was much larger than the Quebec built Glory that arrived in Port Jackson on the same date.

Some of the Pentrich Rioters were transported on the Isabella. They had been tried and convicted of High Treason on 25 September 1817 and sent from Derby to the hulk Retribution moored at Woolwich on 5th February 1818. From there they were transferred to the Isabella on 6th March 1818.

Other prisoners were embarked from the Justitia Hulk on to the Isabella on 2nd March 1818 and from the Retribution on 8 March; others from the Leviathan on 16th March 1818. [1] 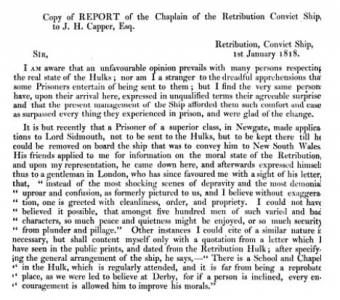 This was John William Hallion's second voyage as surgeon superintendent on a convict ship. He kept a Medical Journal from 1st March 1818 to 22 September 1818.

..........The prisoners were first embarked on the 4th March, being first supplied with an entire suit of warm slop clothing. In England the weather at this season of the year is very cold and inclement and was particularly so from the period of the prisoners embarking on the Isabella until she finally sailed on the 3rd April. From them having only one suit in constant use from the state of the weather, and from the greater liability of a number of men confined together wearing out their clothing than if on shore, this suit of slops were very much worn out at the period of sailing. To allow of some kind of change and with a view to the cleanliness of their skin, one shirt was issued to each man previous to leaving Portsmouth and this together with one pair of raven duck trousers issued on the 14th April were all the slops served out on the voyage. [2]

The Isabella departed England on 3rd April, one week after the Tottenham. They called at Rio where they left the Tottenham on 2nd July 1818. [5]

On our arrival in the Southern latitudes after a tedious passage through the tropics, when we had to encounter the vicissitude of a second winter, the deficiency of clothing was very evident.

for whenever the minds of men and particularly that description of which I am now so remarking are left to their own operations in a state of indolence or inaction, combined with wicked and depraved dispositions and want of education as well as a natural inclination to wickedness and bad and dangerous associations, mischief and evil intentions will invariably be the result. [2]

There were rumours of a conspiracy to mutiny on the voyage and tensions were high. One of the convicts Archibald Macquarie was shot by soldier Robert Hookes who was detained in gaol on arrival. Archibald Macquarie lost his leg but was not killed. An investigation into the affair was later conducted by a Bench of Magistrates.

The Military guard consisted of a detachment of the 48th regiment., under orders of Lieut. Reeve. Passengers William Minchin Esq. late Capt. in the 102nd Regt., with his Family arrived on the Isabella as a Free Settler to reside in the Colony.

The Isabella arrived in Port Jackson on 14th September 1818. Of the prisoners embarked, two died of illness on the passage and another drowned.

The convict indents include the prisoner's Name, When and Where Convicted, Sentence, Native Place, Calling, Age, and Physical Description. There is occasional information about Tickets of Leave but no indication as to where the men were assigned on arrival.

The Isabella departed Sydney for Batavia on 14 November 1818. Dr. Hallion departed the colony on this voyage.

1). Convicts and passengers of the Isabella identified in the Hunter Valley

3). John Hallion was also employed as surgeon on the Alexander in 1816.

4). Samuel Perkins of the 48th regiment was convicted of stealing wearing apparel in Sydney in 1820 and was sentenced to 7 years transportation to Newcastle penal settlement. He died at Newcastle in 1825.

5). Find out more about William Minchin at the Australian Dictionary of Biography Online

6). Archibald Macquarie, 23, was convicted at Edinburgh on 24th November 1817 of housebreaking. He was received on to the Justitia Hulk at Woolwich on 27 December 1817. Henry Laing and Robert Donaldson were also convicted of housebreaking on the same day in Edinburgh.

7). More Pentrich Rioters arrived on the Tottenham in October 1818. See the Pentrich Rebellion for more information about the rioters.

'The following are extracts of a letter which has been received by the wife of (Edward) Turner, the brother of (William)Turner, who, with Ludlam and Brandreth, were executed at Derby, about two years since, for high treason. Turner, it will be remembered, with several others, were allowed to plead guilty and thus to save their lives -

We have had a pretty good passage and have been middling well treated; much better than the general run of those that were with us. We are all much disappointed in not having had our freedom on our arrival, as was promised us. I am working for Government from day light, till two o'clock in the afternoon; after that time I work for myself and can earn as much as I could get for a whole day in England; therefore, was I on my own hands, I could get a very pretty living. I am very well, considering my situation, as I live with an old man and woman, who is constable to the Governor, and they treat me as one of themselves. Indeed I have partly agreed with them for a thirty acres farm.

Now, my dear wife, if you wish for us to meet again and end our days in happiness, let me advise you to apply to the Secretary of State, to give you an order for a passage to this country free of all expense, and I shall be restored to you on your arrival. If it be agreeable to my brother Joseph, to apply likewise to come as a settler I should much urge him to it. He would be granted a farm and provisions from the stores for six months; but, however, he would not want that; and he would be able to gain a little fortune in a few years as our business is one of the best in the country, and farming is as good. There is no rent nor taxes to pay. Wheat is in general ten shillings a bushel Indian corn five shillings; beef at sixpence a pound mutton and pork eight pence and nine pence; the pork is very good, beef and mutton middling; useable tea and sugar very cheap; clothing is rather cheap.

The natives are slender people, Swedish iron is sixpence a pound, sheet one shilling and three pence. If you can get the works of any eight day clock, it will fetch a good price here. We are building a Methodist chapel, and I have engaged for the cutting of the stone; religion is strongly patronised by the governor and the heads of the colony. The stone of the country is remarkably white and works kindly. The building here is very coarse, for want of good mechanics; the workmen are chiefly Irish, that know little about buildings. The timber is very good, both for house building and fur furniture it chiefly consists of cedar for furniture. New Zealand pine for building and oak stringers instead of tiles; the oak apple tree chiefly for firing. We have no limestone; the lime is made of burnt shells. We have plenty of game, both fish and fowl, and no game acts to pay.

My nephew Joseph Turner, (called Manchester Turner) is very well, and is overseer to Captain Minchin, who came in the ship with me. John Hill, one of the Derby convicts from Southwingfield, is well; he is up the country about twenty miles from Sidney, with a gentleman. Our winter is your summer. We have plenty of fruit; peaches in abundance; lemons and oranges, and quantities of vegetables. Here are the handsomest birds in the world. I wish very much my brother Joseph to come, as it would be the making of us. The passage is nothing to what it used to be, as they reach us in about four months; very few die on the passage. Inquire for me a John Dow's near Government Stores, Sidney, NSW'. - Caledonian Mercury, 24 January 1820