In 1798 the Earl Cornwallis was employed by the East India Company and made a voyage to Bengal returning to England by June 1800. Below are the particulars of those who sailed on her on that voyage (1798). 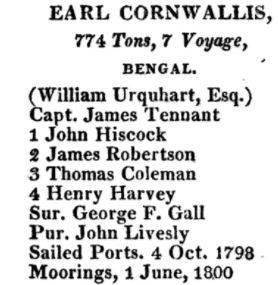 The Earl Cornwallis was sheathed in copper in the year 1800.

The London Times reported in the shipping news dated 4th September 1800 - the ship Earl Cornwallis, bound for Botany Bay with convicts came down to Deal the previous night, and remained there with his Majesty's ships Overyssel, La Prevoyante, and Nemesis, Arrow sloop of war, Terrier armed brig and Ann armed cutter.

Earl Cornwallis was the next convict ship to leave England after the departure of the Royal Admiral in in May 1800.

LieutenaLieutenant James Marshall of the Navy came as Agent of Transports. A passage home was arranged for him by the Albion South Sea whaler at a cost of 84 pounds according to correspondence by Gov. King to the Transport Board, however Lieut. Marshall involved himself in a disagreeable situation.....In July he was sentenced to pay a fine of £50 to the King and a Year's Imprisonment in the Jail for an assault and battery on Captain Abbott of the New South Wales Corps and also of assaulting Captain John McArthur of the same Corps. This was after it had been found that Lieut. Marshall had taken for his own use, items (a gun and bedding) that had belonged the Lieutenant Crawford on the voyage out. In August because of some legal irregularities the sentence was partially remitted on the condition that Lieutenant Marshall depart the colony on the Albion whaler [2]


Crewobert Scott was fifth Mate on the Earl Cornwallis.....The National Library holds ten letters written by Robert Scott. Some d. Some describe the voyage from Cowes to Port Jackson on board the Cornwallis between Nov. 1800 - June 1801, while others were written before setting sail.


Fumigating Lampsir Jerome Fitzpatrick was Inspector of Health to the British Army. The Jackson's Oxford Journal reported on the 8th November 1800..... Sir Jerome Fitzpatrick has, for the first time introduced his fumigating lamps into the Earl Cornwallis convict ship, which dropped down from Portsmouth to Cowes some days ago, with 294 male and female convicts on board, for New South Wales. These lamps are of the greatest importance to the prisoners, as they are calculated to prevent that destruction caused by candles and other lights, of the oxygen or vital principle of the air, which is so essential to animation.

The Earl Cornwallis arrived in Port Jackson on 12 June 1801 with one hundred and sixty-six male convicts and 87 female convicts.

The colony had experienced uncommonly bad weather and there had been a partial failure of crops previous to the Earl Cornwallis' arrival. By June Governor King was obliged to reduce the consumption of grain and salt meat to two thirds of the full ration.[3]

He wrote to the Transport Commissioners of the arrival of the Earl Cornwallis:

Sydney N.S.Wales,
21st August 1801,
Gentlemen,
By the way of InBy the way of India I had the honor of writing you, a duplicate copy of which accompanies this. The Earl Cornwallis arrived here the 10th June. By that ship I received your letters and their several enclosures, together with the store, provisions, and passengers, the Commissary's receipt for all which I enclose. The difference between the number of prisoners sent on board and landed here the master accounts for by their having died of the dysentery during the voyage. Many of those landed are extremely weak and feeble. No complaint has been made of improper treatment during the voyage, and what is very extraordinary no complaint has been made by the agent or master of any very bad behaviour of any of the prisoners during the voyage. On the contrary they both speak to their advantage. I am sorry to observe that Lieut. Henry Crawford, of the New South Wales Corps, was drowned at Rio de Janeiro. The ship was cleared within the time allowed; therefore no demurrage has taken place. [4]


Description of Sydneyition of Nicholas Baudin on Geographe and Le Naturaliste also reached Port Jackson in June 1801. A young naturalist by the name of François Péron was on this expedition and he kept a record of his impressions of Sydney at this time. His descriptions of the entrance and other features were just as the prisoners of the Earl Cornwallis would also have observed .........

Towards the middle of this magnificent port, and on its southern bank, in one of the principal creeks, rises Sydney Town, the capital of the country of Cumberland, and of all the English colonies in this part of the world; seated at the base of two hills, that are contiguous to each other and having the advantage of a rivulet, which runs completely through it; this infant town affords a view, at once agreeable and picturesque. To the right, and at the north point of Sydney Cove, you perceive the signal battery, which is built upon a rock, difficult of access; six pieces of cannon, protected by a turf entrenchment, cross their fire with that of another battery, which I shall presently mention; and thus defend, in the most effectual manner the approach to the harbour and the town. Further on, appear the large buildings that form the hospital, and which are capable of containing two or three hundred sick.

Amongst these buildings, there is one particularly worthy of notice, as all the parts of it were prepared in Europe, and brought out in Commodore Phillip's squadron; so that in a few days after its arrival, there was an hospital ready to receive such of the crews as were sick. On the same side of the town, at the sea shore, you observe a very fine magazine, to which the largest ships can come up, and discharge their cargoes. In the same direction are several private docks, in which are built brigs and cutters, of different sizes, for the purpose of trading either inland or beyond the colony. These vessels which are from fifty to three hundred tons burthen, are built entirely with the native wood; even their masts are obtained from the forests of the colony.

It is at the spot called Hospital Creek, that the ships of individuals unload their cargoes. Beyond the hospital in the same line is the prison, which has several dungeons capable of holding from an hundred and fifty to two hundred prisoners; it is surrounded by a high and strong wall, and has a numerous guard on duty, both by day and night. A short distance from the prison is the storehouse, for the reception of wines, spirituous liquors, salt provisions etc. In the front of it is the armoury where the garrison is drawn up every morning; accompanied by a numerous and well composed band, belonging to the New south Wales regiment.

The whole western part of this spot, is occupied by the house of the lieutenant governor general; behind which is vast garden which is worth the attention both of the philosopher and the naturalists on account of the great number of useful vegetables which are cultivated in it; and which have been procured from every part of the world by its present respectable possessor, Mr. Paterson, a distinguished traveller, and member of the Royal Society of London. Behind the house and the magazine just mentioned is the public school; here are educated in the principles or religion morals and virtue, those young females who are the hope of the rising colony; but whose parents are either too degenerate too poor to give them proper instruction. In the public school however, under respectable matrons, they are taught from their earliest years, all the duties of a good mother or a family.

Behind the house of the lieutenant governor in a large magazine , are deposited all the dried pulse and corn, belonging to the state. It is a sort of public granary intended for the support of the troops and the people who receive their subsistence from the government.

The barracks occThe barracks occupy a considerable square, and have in front several field pieces; the edifices for the accommodation of the officers, form the lateral parts or ends of the building; and the powder magazine is in the middle. Near this, in a small private house, the principal civil and military officers assemble. It is a sort of coffee house, maintained by subscription, in which there are several amusements but particularly billiards, at which any person may play, free of expense. Behind the armoury is a large square tower, which serves for an observatory to those English officers who study astronomy

The Master James Tennant, offered Governor King a large quantity of iron for making grates and tools, which offer was accepted.

Governor King .....'The first cargo of coal brought from the Coal River in a Government vessel (the Francis) I exchanged wi) I exchanged with the Master of the Earl Cornwallis who goes for Bengal from hence, for iron which he gave 30 per cent profit for our coals at two pounds five shillings per chaldron.' [5]

Prisoners of the Earl Cornwallis identified in the Hunter region

3). In 1810 the following people who had arrived on the Earl Cornwallis received their Certificates of Freedom being restored to all the Rights of Free Subjects in consequence of their terms of transportation being expired... Elizabeth Stowe, Anne Fogg, Susannah Ashman, Elizabeth Seallock, Elizabeth Phillips, Mary Williams alias Jones, James Taylor, Lidia Parker and Nathaniel Lloyd.

4). The infamous Ralph Malkin who was tried in Derby 16 July 1799 was among the prisoners on the Earl Cornwallis; as was the man who became known as the Botany Bay Rothschild, Samuel Terry (see It Doesn't End There, Great Australian Stories with a Twist, John Laws and Christopher Stewart)

5). Convict Thomas Rudd from London is of interest in that his descendant would one day become Prime Minister of Australia.

6). Read the story of Charlotte Badger who was tried in Worcester in 1796 and sentenced to 7 years transportation in Come on Shore and we will Kill and Eat you All by Christina Thompson

8). Aaron Graham was appointed Inspector of Convicts Establishments in England in 1801. - Copy of Letter from Mr. Aaron Graham praying pecuniary Relief in 1815 - Journal of the House of Commons