The Boyd was built on the River Thames. This was her only voyage as a convict ship. Convicts transported on the Boyd came from counties in Ireland - Dublin, Carlow, Tipperary, Longford, Armagh, Sligo, Kildare, Cork, Westmeath, Limerick, Wicklow, Roscommon, Mayo, Waterford and Carrickfergus.

The Boyd was the next convict ship to depart Ireland bound for New South Wales with male Irish convicts after the Tellicherry in August 1805. In the years between prisoners sentenced to transportation were held in county gaols or sent to Cork and Dublin to await their punishment.

In June 1807, eighteen months before the Boyd was due to depart, plans were already underway to transfer prisoners to convict ships -

Dublin - 22 June 1807 - On Monday evening, four convicts who were sentenced at the assizes of Mayo, to be transported to Botany Bay, named Daniel McAnarty, John Moloney, Martin Freele and Mr. Tobias Jennings (a man who had interests in this country to the amount it is said of £1000 per annum) were conveyed through Limerick from Castlebar, under a military escort on their transmit to Cork to be embarked at Cove on board a transport bound for Port Jackson. [1]

Dublin - 10th November 1808 - Two vessels laden with convicts under sentence of transportation, and destined for Botany Bay, now remain in the great dock of the Grand Canal Company near Ringsend (Dublin); one is a sloop cutter-rigged in which the females are deposited (the Experiment), the other a brig-rigged vessel, in which the male convicts are to be embarked; several persons have been, and are further expected to be transmitted from different parts of the country to add to this precious exportation. [2]

Waterford - 16 November 1808....On Sunday morning the convicts for Botany Bay confined for some time past in the city and county jails of Waterford, were sent for the Cove of Cork, under a military escort - one prisoner, of the name of Fleming, from Wexford, accompanied them: Maurice Hickey, Patrick Keane, James Swaine and Mary Hale, from the county jail - and John Reade from the city. Wednesday last the following convicts were transmitted from Clonmel to Cork, under an escort of Cavalry, previous to transportation to Botany Bay, viz - Daniel Long, John Bull Murphy, John White, Stephen Blake, William Hogan, Denis Criney and Mary Dooney.

Dublin 11 February 1809......It may not be unworthy of observation, nor should it be unknown to the public, that during the embarkation of those unhappy victims to the violation of the laws of their country; they bestowed the most fervent prayers, and expression of gratitude to Mr. McDowell, the deputy gaoler of Newgate, who was then inspecting their embarkation; and it is likewise most gratifying to learn, that such is the well regulated internal government of Newgate in this city under the direction of Mr. Gregg the head gaoler and Mr. McDowell the deputy gaoler, that it was not found necessary to load any one of the 80 male convicts who were for some time in that prison, under sentence of transportation, with any bolts of iron. The eight robbers under sentence of death were all taken up by Mr. McDowell.

Between 40 and 50 male convicts, and upwards of 20 female convicts were conveyed from Newgate (Dublin) in a number of jingles, jaunting cars and carts which were prepared for the occasion, to the great dock of the Grand Canal, where they were embarked in the vessels now moored there, in which they are to be transportation to Botany Bay.

The High Sheriffs of this city (Limerick) received on Monday a communication from Government, whereby His Grace the Lord Lieutenant has been pleased to stay the execution of Simon White, who was to suffer death for a rape on Saturday next, and to order transportation for life; he yesterday was transmitted for Cork to be put on board the receiving ship in that harbour for Botany Bay. [4] 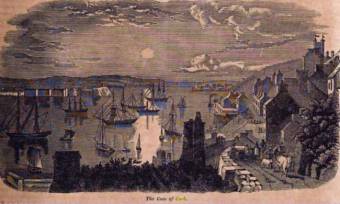 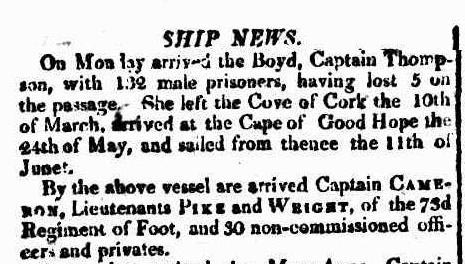 The Boyd arrived in Port Jackson on 14 August 1809. Five prisoners died on the passage out. The Boyd brought news of the appointment of Governor Bligh's successor, Lachlan Macquarie and of the fall of Lieut-General Sir John Moore at Corunna.

The vessel was set upon by natives in the Bay of Islands, New Zealand and most on board were massacred. The only survivors were Mrs. Morley and child, Betsey Broughton, (daughter of Commissary Broughton) and Thomas Davis (a boy). Read about the massacre here


Prisoners of the Boyd identified in the Hunter Valley region:

2). In December 1807 Martin Egan was tried in Dublin for stealing some bridles and saddles, the property of William Alexander, Esq., the Superintendent Magistrate. He was sentenced to transportation for 7 years.

[5] From Castlebellingham to the Bay of Islands: Tully Mathews, New Zealand's First Brickmaker by Tony Carr