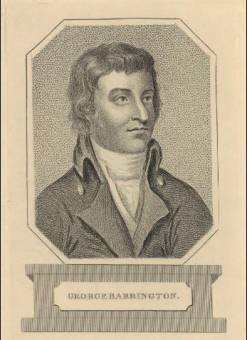 First Ship of the Third Fleet, the Mary Ann departed England. The Mary Anne sailed from Gravesend with nearly 100 women convicts on board. The Matilda also sailed at the same time to receive convicts at Portsmouth. Two other ships sailed within nine days, the William and Anne, and the Britannia, both with male convicts. The other ships still lying at Gravesend, to receive the male convicts from Newgate, were the Albemarle, the Admiral Barrington, and the
Active - The Lady's Magazine: Or Entertaining Companion for the Fair Sex

Remarkable escape from the colony by convicts William and Mary Bryant and others.

Signing of first land grant in Australia. James Ruse, a convict whose sentence had expired and who had recently married Elizabeth Perrey on 5th September 1790, was granted 30 acres at Parramatta on 30th March 1791. HRA Return of Lands Granted dated 5 November 1791 records that there was already 8 acres, 2 roods of land under cultivation. Prior to the Grant, Ruse was allowed 1 acre and a hut by Governor Phillip in November 1789 in order to establish the time it would take a man to cultivate sufficient quantity of ground to support himself (HRA, Series 1, Vol. 1., 1788 - 1796 p. 183) The 30 acre grant was sold to surgeon John Harris in 1793.

The greater part of the live stock having been killed in 1790, the colony was distressed for provisions. A laying hen sold for 20 shillings; pork a shilling a pound and a roasting pig sold for 10 shillings.

Re-naming of Rosehill to Parramatta

Convict Mary Talbot's Letter published in The Times in October 1791 gives an account of the voyage of the First Ship of the Third Fleet Mary Ann which arrived at Sydney Cove on 9 July 1791 with 141 female convicts and six children, almost all in good health. The Mary Ann brought stores and nine months provisions for the women. The convicts were landed on 11th July 1791

Arrival of the Matilda. A total of 205 male convicts were brought out on the Matilda. 24 prisoners died on the passage out. Matilda Convict Daniel Phillips accompanied John Howe on his expedition of discovery in 1819.

Arrival of the Salamander with 12 privates of the NSW Corps and 154 male convicts and stores and provisions. Most of the convicts were in a weak emaciated state, and complained that proper attention had not been paid to them.

William and Mary Bryant delivered to Captain Edward Edwards, of his Majesty's ship Pandora, by Timotheus Wanjon, Esq., Governor of the Dutch Settlements at Timor.

Arrival of the convict ship Britannia

Arrival of the Admiral Barrington. The Guard - A Captain, three non-commissioned officers and 24 privates 264 male convicts; four women came out with their husbands, and two children.

Twenty-nine Marines, 4 wives and 10 children request to settle at Norfolk Island and depart on 26th October. The Atlantic to continue to Calcutta after Norfolk Island

A Vineyard was established on the Parramatta River

Public protest after reduction in rations.

The Gorgon cleared the Heads with a fair wind on her return voyage to England with the main body of the First Fleet Marines. Those who departed on the Gorgon included Sergeant James Scott and his wife and children; Major Robert Ross; Ralph Clark; Watkin Tench; William Dawes

In 1791 a fishery for spermaceti whales was commenced on the coast of New South Wales by Captain Melville, commander of the Britannia - Success of the Whaling Industry