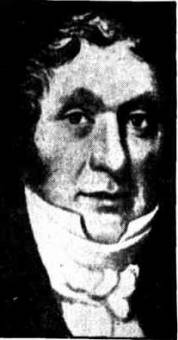 The Story of His Life

About the beginning of the year 1797 a youth of nineteen donned the uniform of a surgeon first mate, and entered upon his duties as a member of the company of H.M.S. Standard, stationed at the Nore. This was William Redfern, destined in after life to play a very conspicuous part in the early history of the colony of New South Wales.

Mutiny of the Nore

In May of the year mentioned certain members of the Standard's crew complained of the food supplied to them, and asked the young surgeon’s mate to support their protest. He agreed to do so, and advised the men to 'make a united appeal'. Unfortunately for him and for them instead of petitioning in the proper way, the crews mutinied. [1]

This was In May 1797, and the event is known in history as the 'Mutiny of the Nore.' The result of it is well known. The leaders were overpowered and hanged; and the others punished with varying degrees of severity.

The Trial of the mutineers of the Standard man of war concluded at Greenhith on Friday last, when John Burrows, Joseph Hudson, William Redfern, surgeon's mate, and Thomas Lunness, alias Linnes, received sentence of death; but the Court recommended to his Majesty's mercy Joseph Hudson on account of a wound he received in his Majesty's service, which deprived him of his senses after having drunk strong liquor; and William Redfern was likewise recommended to mercy, on account of his professional situation leading him more amongst the mutineers than any of the other officers. The Court found the charge proved only in part against Bryan Finn, alias Fenn, and Joseph Glaves, and sentenced to former to receive three hundred lashes, and the latter two hundred and fifty. The trial of the following persons belonging to the same ship ended on Monday sennight; William Holdsworth, Henry Freeman, John, alias Jonathan Davis, Bartholomew Connery, William Jones, Sampson Harris, and Thomas Sael, seamen. They all received sentence of death except Sampson Harris, respecting whom the Court found the charge proved only in part, and sentenced him to receive two hundred lashes. No more of the mutineers are to be tried at Greenhithe. On the conclusion of the trial of the people of the Standard, Vice Admiral Patley struck his flag on board the Centaur, which ship, with the Neptune and some others, is under orders to join the Channel fleet.

His name is recorded in the UK Prison Hulk Registers - William Redfern, age 32 - Tried on the Neptune 22 August 1797, sentenced to NSW for Life. Received on to the Perseus hulk at Portsmouth on 1 April 1801. Sent on board the Canada convict ship 6 June 1801. [3]

The three convicts ships Nile, Canada and Minorca sailed together for New South Wales, so at some point William Redfern apparently transferred to the Minorca. During the voyage he assisted the surgeon. The Minorca arrived in Sydney on 14 December 1801.[5]

Thomas McCann and George Lewis were also tried for mutiny in 1797 and arrived in New South Wales on the Minorca. 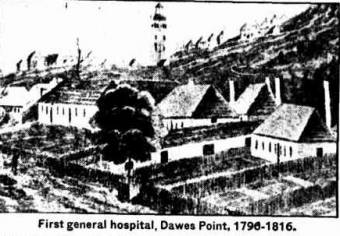 On his arrival in Sydney William Redfern was sent to Norfolk Island where he was employed as the civil surgeon.

In 1802 he was appointed by Lieut-Col Foveaux, who was then in charge of Norfolk Island to the post of assistant surgeon. In this same year he was granted by Governor King, an absolute pardon.

In 1808 he was appointed Assistant Surgeon at the Dawes Point Convict Hospital in Sydney.

William Redfern was the first person to receive an Australian medical qualification, and was the first teacher of Australian medical students.[4] He instigated important reforms in the management of convict ship voyages following the arrival of the Surry and General Hewitt in 1814.  He was heavily involved in many aspects of colonial life in business and in his professional capacity - In addition to his work in the hospital wards, Redfern conducted a daily out-patient clinic for men from the convict gangs. He also had the most extensive private practice in the colony, for he was the most popular doctor in the settlement and his services were widely sought. He was the family doctor to the Macarthurs and the Macquaries and attended the birth of Governor Macquarie's son. His professional skill was highly regarded by his colleagues and he had the reputation of being the best obstetrician in the colony [5]. He assisted Blaxcell, Riley and Wentworth in the building of the new General Hospital 1811 - 1816. In 1815 he accompanied Governor Macquarie on a trip across the Blue Mountains; in 1817 he was one of the first directors of the Bank of New South Wales. He supplied wool to the Parramattta Factory in 1821 and imported sugar from Mauritius in 1827.[1]

After almost eighteen years in public service as assistant-surgeon, William Redfern expected to succeed D'Arcy Wentworth to the position principal surgeon in 1818 , however despite recommendations from Governor Macquarie, James Bowman, was appointed to the position. Almost immediately Redfern resigned.

In correspondence dated 14 July 1820 from Governor Macquarie to Earl Bathurst, Macquarie requested that Redfern receive a pension or half pay equal to five shillings. He left no doubt as to his admiration for the surgeon:

The Medical Services of Assistant Surgeon Redfern in this Colony for nearly Eighteen Years past have been Most Arduous, Assiduous and eminently Useful. He is a Man of Very Superior Medical Talents and professional Skill. I therefore Consider his Retirement as a great Public Loss, and I am Convinced it will be generally felt by this Community. It is to Mr. Redfern's able Report and most Judicious Suggestions, which I had the Honor of transmitting to Your Lordship and to the Commissioners of the Transport Board in the Month of October, 1814, on the Subject of the great Mortality and bad Medical Treatment of Convicts on their passage from Europe to this Country, that the present improved System of sending Naval Surgeons as Superintendent Surgeons in Charge of the Convicts is owing. Your Lordship and the Commissioners of the Transport Board having ordered it to be immediately Acted upon. [6] This was after the arrival of the General Hewitt in 1814 when 34 prisoners died on the voyage out.

William Redfern was granted 70 acres of land. Another 30 acres given to Sarah Wills by her mother as a wedding gift adjoined his grant. This 100 acres became the suburb of Redfern. 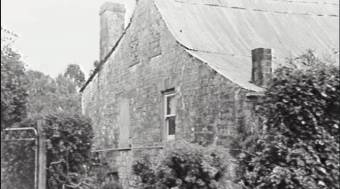 William Redfern came to own much land - at Bathurst, Cowra and Geelong and also where his built his home on the George's River named Campbell Fields.

He was buried in the New Calton Burying Ground. Overlooking the burial ground is a tower designed to prevent thieves from snatching the recently deceased. Find out more about the tower at Atlas Obscura

2). William Redfern, the First Australian Medical Graduate. POSTSCRIPTUM. By NORMAN J. DUNLOP, B.A., B.Sc., M.B., Ch.M. (Fellow). -
Through the researches of A. A. Scot Skirving, Esq., F.R.C.S., of Edinburgh, Scotland, and the courtesy of his brother, Dr. Robert Scot Skirving, of this city, it is now possible to state where all that is mortal of William Redfern rests. The records in the Edinburgh Registrar-General’s Office have been searched, and a notice has been found in the records of the Calton Burying Ground that tells us that William Redfern, aged fifty-eight years, formerly a surgeon living at 18 Lothian Street, Edinburgh, was buried in the New Ground in a grave purchased for his executors by Mr. David Walker. The cause of death is not stated. This entry is dated July 23, 1833. The “New” Calton Cemetery is called so in distinction to the “Old” Calton Burying Ground, which had reached saturation point before Redfern died. Both cemeteries are south of Calton Hill. It is of interest to note that the Old Calton Cemetery contains the memorial to W illiam Skirving and his companions. Although the cemetery in which he was interred can be named with certainty, the exact spot where Redfern was buried is unknown. Had there been a headstone containing a legend, Dr. Archie Scot Skirving would have had it photographed. Royal Historical Journal and proceedings, Vol. 14 Part. 5 (1928) - Trove