William Elyard was appointed surgeon to the Guard ship Tisiphone in 1811. He may have been on board in October 1811 when the Tisiphone came to the rescue of the passengers and crew of the frigate Pomone which struck on the Bridge rock while coming through the Needles at low water mark.[2] 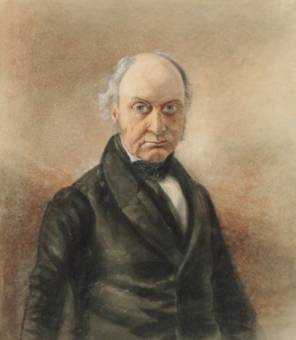 By 1821 William Elyard, a half-pay naval surgeon, and his wife Sarah, née Gilbert were compelled by his health and finances to emigrate to New South Wales.

To this end, he was appointed Surgeon-Superintendent on the convict ship John Bull bringing female prisoners to New South Wales.[5]

On Tuesday the 5th June the John Bull arrived at the Cove of Cork and I was dischargd from the John Barry in which I came with my family from Deptford, and on the same morning I went on board the John Bull and read my Warrant as Surgeon and Superintendent of the female convicts to be embarked on board the said ship for New South Wales.

The voyage did not start well when one of the seamen of the John Bull was found to have small pox as the vessel lay at Cork. The man was removed and the ship was fumigated and the ports were open day and night.

At 3am on 25th July they weighed anchor and stood out to sea.

William Elyard found the women insolent, riotous and aggressive and struggled to deal with them throughout the voyage. As can be seen from the examples below, he punished them by confining them in the coal hole, putting a wooden collar on their neck or confining them in hospital.

29 July 1821; At 8pm when mustering the convicts to their beds I detected Mary Hinds with a lighted rag and a nutmeg grater used to carry fire below for the purpose of smoking after being locked up. Of course took it away and reprimanded her.

31 July 1821; at 7pm Jane Mitchell, convict, having been turbulent and riotous and when desired to desist being insolent was confined in the coal hole until 8pm at which time she was released.

1 August 1821; At 8am got all the convicts on deck with their beds, attended serving breakfast, at which time Mary O’Neil being quarrelsome with her messmates, throwing their allowance of tea water overboard and being insolent to the Captain. I thought it requisite to punish her by confinement in the Coal Hole.

2 August 1821; At half past 2pm punished Mary Downs by confining her in the hospital with a collar on her neck for assaulting Matilda Brown and for making a second attack upon her in the presence of myself the Captain, Officers, convicts and ships company on the quarterdeck although advised to desist.

3 August 1821; At sunset in consequence of Jane Hamilton being quarrelsome and abusive to Maria Wade whom she threatened with revenge and being insolent when ordered to desist, I confined her in the hospital all night and darkened the place by putting on the gratings and tarpaulins on fore hatchways as well as to prevent any communication with the seamen.

On the 13th December 1821 they made King Island in Bass straights and on the14 December at 10.30 am a heavy sea struck the ship right aft.

William Elyard described the fear and chaos that ensued - the water stove in all the windows and filled the cabins, state rooms, and convicts' prisons with water. The convicts were very much alarmed and screamed out. My own family sleeping in the after cabin were completely soaked in their hammocks and on their screaming out, I attempted to get out of bed when the water from the Captain's cabin rushed into my State Room window into the bed where my wife and infant child lay and knocked me backwards. On the heel of the ship the water retreating I jumped out of bed and was jammed up by the broken frames of the stern windows and our chests all floating, the water being at this time above my knees.

As soon As I could obtain a light and the confusion had a little subsided I obtained two men and two boys with buckets to bail the water out of the state and after cabins, which occupied us all for two hours, having nothing dry, our shoes and boots carried by the retiring sea out of the stern windows, hats, clothes, chests and every thing floating about, and everything quite wet and having only my shirt on which was very wet, after securing everything as well as we could I went to bed again, having had the stern ports or windows secured by the carpenters.


Life in the Colony

In 1822 William Elyard was appointed superintendent at Carter's Barracks.