Two of the women Mary McMahon and Bridget O'Hara came from Co. Louth.

In 1822 twelve months after the John Bull departed Ireland prison reformer Thomas Reid (surgeon on the Neptune in 1818, and Morley in 1820) embarked on an extended journey throughout Ireland visiting prisons, gaols and convict ships. He later described the conditions in Louth gaol at that time

Louth is a square building of small size, consisting of two stories; it is not the most commodiously constructed, but it is decidedly the best regulated prison I have yet seen in the kingdom except the Belfast penitentiary. A considerable addition was made to it in March 1820 and it is in contemplation to enlarge it still more. The old prison is appropriated to debtors. There are at present four day rooms, as many work rooms, and seven yards besides a garden which is both useful and ornamental. Adjoining the prison is the court house into which prisoners for trial are directly marched, without taking them outside the gaol. There are schools in which each class of prisoners is instructed for two hours in succession. To these as to every other duty, great attention appears to have been paid, and the result is most gratifying. The females are employed in spinning, sewing, knitting and picking oakum; but great difficulty is experienced in getting sale for the articles they manufacture. There are two committees; that of the ladies attends three times a week. Three clergy men are said to be very regular in their attendance.

After being transferred from the various county and city gaols, the women were held in the Cork Depot to await transportation. The Third Report of the Committee of the Society For the Improvement of Prison Discipline by T. Bensley was released in 1821 and included the following summary of the Cork Depot which gives an idea of what it may have been like for the women at this time -

William Elyard kept a Medical Journal from 5 June 1821 to 7 January 1822 - His duties commenced before the prisoners had even arrived - one of the seamen of the John Bull was attacked with small pox as the vessel lay at Cork. He was removed and the ship was fumigated and the ports were open day and night.

On the 14th July 80 female convicts and some children were embarked and on the 16th July the brig Park brought 22 women and children, relatives of convicts, who were going out to their relations in Sydney.

Dr. Trevor vaccinated some of the children - Mary Kelly, aged 5; John Brennan, aged 9; Elizabeth wade, aged 2; Letitia Murphy, aged 1 and 1/2; Isabella Paterson, aged 6 months; Mary Ann Kilrea, aged 4; Rose Hinds, aged 7; Biddy Donnell, aged 2; Mary Brady, aged 20; Jane Moore, aged 19. Dr Trevor sent oatmeal on board for the convicts' breakfast to be boiled into stirabout with water and sugar however the women refused to eat it and threw it away. On surgeon William Elyard representing the situation to Dr. Trevor he replied that it was good enough for them. The women were also given bibles, testaments and prayer books.

On the 23 July the John Bull weighed anchor and dropped down to Man of Wars Bay and the following day free passengers John Lowry (formerly of the 73rd regiment) and his wife and five children embarked.

At 3am on 25th July they weighed anchor and stood out to sea. The pilot was discharged three hours later and the voyage began.

During the following days many of the women suffered with sea sickness, however after recovering they became insolent, riotous and aggressive and the surgeon struggled to deal with them throughout the voyage. As can be seen from the examples below, he punished them by confining them in the coal hole, putting a wooden collar on their neck or confining them in hospital.

29 July 1821; At 8pm when mustering the convicts to their beds I detected Mary Hinds with a lighted rag and a nutmeg grater used to carry fire below for the purpose of smoking after being locked up-of course took it away and reprimanded her.

31 July 1821; at 7pm Jane Mitchell, convict, having been turbulent and riotous and when desired to desist being insolent was confined in the coal hole until 8pm at which time she was released.

1 August 1821; At 8am got all the convicts on deck with their beds, attended serving breakfast, at which time Mary O'Neil being quarrelsome with her messmates, throwing their allowance of tea water overboard and being insolent to the Captain. I thought it requisite to punish her by confinement in the Coal Hole. 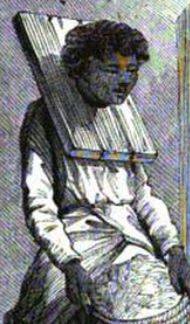 2 August 1821; At half past 2pm punished Mary Downs by confining her in the hospital with a collar on her neck for assaulting Matilda Brown and for making a second attack upon her in the presence of myself the Captain, Officers, convicts and ships company on the quarterdeck although advised to desist.

3 August 1821; At sunset in consequence of Jane Hamilton being quarrelsome and abusive to Maria Wade whom she threatened with revenge and being insolent when ordered to desist, I confined her in the hospital all night and darkened the place by putting on the gratings and tarpaulins on fore hatchways as well as to prevent any communication with the seamen.

They anchored in Port Praya, St Jago on 18th August. Here they were able to purchase fresh beef (two bullocks, vegetables, water and fruit. On 23rd August while still at Port Praya the weather turned bad with gales causing the ship to pitch heavily and to drive her towards the rocks. At midnight with the wind still blowing hard the ship got into the surf near the rocks and the captain had oars put in the boats in case of the ship striking. By the following day the winds had abated and they got under weigh. The surgeon recorded his relief at leaving Porta Praya St. Jago and its rocks behind.

William Elyard described the fear and chaos that ensued - the water stove in all the windows and filled the cabins, state rooms, and convicts' prisons with water. The convicts were very much alarmed and screamed out. My own family sleeping in the after cabin were completely soaked in their hammocks and on their screaming out, I attempted to get out of bed when the water from the Captain's cabin rushed into my State Room window into the bed where my wife and infant child lay and knocked me backwards. On the heel of the ship the water retreating I jumped out of bed and was jammed up by the broken frames of the stern windows and our chests all floating, the water being at this time above my knees. As soon As I could obtain a light and the confusion had a little subsided I obtained two men and two boys with buckets to bail the water out of the state and after cabins, which occupied us all for two hours, having nothing dry, our shoes and boots carried by the retiring sea out of the stern windows, hats, clothes, chests and everything floating about, and everything quite wet and having only my shirt on which was very wet, after securing everything as well as we could I went to bed again, having had the stern ports or windows secured by the carpenters.

On 16 December all the convicts and passengers were ordered to rinse and dry their clothes also to wash their beds blankets and pillows as they hoped to arrive in Sydney Cove the following morning. They anchored in Sydney Cove, on Tuesday 18th December 1821 and naval officer Captain Piper came on board to receive all letters and dispatches for the Governor. 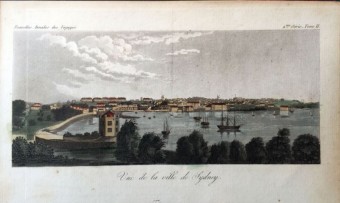 On 20 December Major Goulburn, Colonial Secretary inspected the convicts, passengers and free settlers and children on board and Major Weymyss served out slops to the convicts.

The following day Governor Sir Thomas Brisbane came on board to inspect the convicts and their children and provisions were served out to the convicts going to the Parramatta factory. 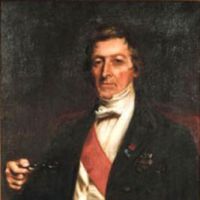 They were then disembarked from the ship into schooners appointed to take them up river to the factory. On going away they all returned their thanks to the surgeon and captain for their leniency and attention to them, many of them kissing our hands as they went over the sides. This was the first female convict ship to be inspected by Sir Thomas Brisbane in his new role as Governor of the colony.

Captain Corlette and the Crew

1). In January 1822 the Colonial Secretary in Sydney informed Lieut-Governor Sorrell in Van Diemen's Land that Van Diemen's Land convict's wives and families recently arrived from Ireland on the John Bull were being accommodated at Parramatta at the public expense. 2 pounds for passage money would be allowed should the convicts be desirous of joining their families in Sydney. If they wished their families to join them in Van Diemen's Land only 2 pounds to each man could be allowed for that purpose. The families included those of George White, John Best, Patrick Montgomery and Brian Bennett.

4). Convicts and prisoners of the John Bull identified in the Hunter Valley region -

[1] National Archives. Reference: ADM 101/38/7 Description: Diary of the John Bull female convict ship for 5 June 1821 to 7 January 1822 by William Elyard, surgeon and superintendent, during which time the said ship was employed in conveying female convicts and passengers from the Cove of Cork to Port Jackson, New South Wales