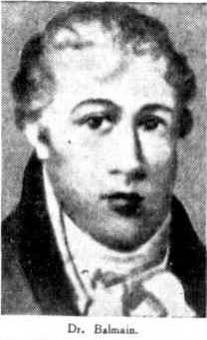 William Balmain, surgeon and landholder, was born on 2 February 1762 at Balhepburn, Rhynd, Perthshire, Scotland, the son of Alexander Balmain and Jane Henderson.

In October 1786 he was commissioned assistant surgeon to New South Wales. He was about twenty-five years of age when he sailed in the First Fleet transport Alexander the following May reaching Port Jackson in January 1788.

William Balmain served in Sydney until October 1791, when he was appointed senior assistant surgeon to Norfolk Island. While in Sydney, he had formed a relationship with Margaret Dawson, a convict girl who had arrived on the Lady Penryhn. In November 1791 they, together with Philip Gidley King, sailed to Norfolk Island on Atlantic. Their daughter Ann was born at Norfolk Island.

Thomas Jamison was also stationed at Norfolk Island from 1788 to October 1799. He later succeeded William Balmain to the position of Surgeon General of New South Wales.

In 1796 William Balmain became Chief Surgeon in succession to Surgeon John White who had returned to England in December 1794. He was appointed Magistrate and served on committees and was active in other public duties.

William Balmain and Margaret Dawson returned to England in August 1801 on the Albion. He was appointed Surgeon to the Forces in 1803.

The Morning Chronicle reported his death in November 1803 - On the 17th instant in King Street, Bloomsbury, Dr. William Balmain, Surgeon to His Majesty's Forces and late Principal Surgeon to the territory of New South Wales.

He left most of his estate to Margaret Dawson who had returned to England with him.