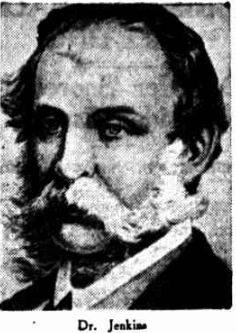 Richard Lewis Jenkins was the son of Richard Jenkins of Newport Monmouthshire. He arrived as surgeon superintendent on the James Moran in 1841. [1]

After arrival he practised medicine at Jerry's Plains for some time. He was active in the community, attending the races and other events. In August 1843 he and Captain Scovell organised a Ball for the gentry of the neighbourhood.

He had left the Jerry's Plains district by 1848 and turned his attention to pastoral pursuits. In 1848 he held Woolamon, Piallamore and Womoromurra stations on the Liverpool Plains. Later he also owned stations in Queensland. 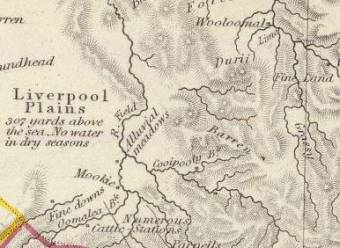 New South Wales. (with) Sydney, from the New South Wales almanack. Compiled under the superintendence of the Society for the Diffusion of Useful Knowledge. - David Rumsey Map Collection

He established a hospital at Woolomon. In 1850 he moved to Tamworth - 'The undersigned begs to intimate to the residents of Liverpool Plains and adjoining districts that he has made arrangements to remove from his Station to Tamworth, to succeed to the Practice of Dr. Haig. In compliance with the wishes of several respectable settlers an Hospital will be established for the conveniences of Invalids resident in the interior. Richard Lewis Jenkins, L.A.C., and Member of the Royal College of Surgeons, London. Peel's River, Jan 10, 1850'.

He announced that the hospital in the building selected by him in Tamworth was ready for the reception of patients in March of that year.

After the Hanging Rock gold rush of 1852 Richard Lewis established a public house at the junction of Oakenville Creek and the Peel River. He purchased gold from prospectors and also sent samples for analysis.

In a series of articles written in 1955 historian James Jervis wrote of Richard Jenkins' expertise in breeding Shorthorn cattle and included the following details....

Richard Jenkins moved to Sydney in 1857 and in the following year was elected to represent the Liverpool Plains seat in the New South Wales Parliament. He urged the adoption of a system of universal education and the establishment of reformatory schools for young criminals. He only remained in the House until 1859.

The Sydney Mail published a brief biography touching on his time in Parliament....

Dr. R.L. Jenkins was closely identified with the intellectual progress of the colony, giving his attention particularly to educational matters. He was a man of great tact, a clever medical man, and personally popular. He represented the Gwydir electorate in the first Parliament. His influence upon the legislators of his day was a profound one, and it was always exercised in the best direction.[3]

In 1860 Dr. Jenkins purchased Park Hall at Douglas Park, a property owned for many years by Sir Thomas Livingstone Mitchell. On it stood a magnificent stone mansion the foundation stone of which was laid by Mitchell and Sir Charles Nicholson. The stone had a long inscription in Latin which translates as follows: Thomas Livingstone Mitchell, Knight Honored Doctor of Civil Laws in the University of Oxford accompanied by Sir Charles Nicholson, Doctor of Medicine in the year of grace 1842 and in the reign of Queen Victoria laid the foundation stone of this house in a land now almost divided from the world, but which it is hoped may one day equal in all the arts of civilisation the illustrious regions of his native country. The house was modelled and named after Park Hall in Stirling Scotland. Richard Jenkins named the estate Nepean Towers.[2] In 1904 Nepean Towers was acquired by the Missionaries of the Sacred Heart and became known as St Mary's Towers. 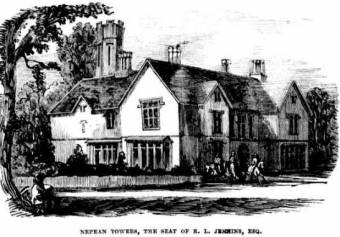 1). Richard Lewis Jenkins was the first Tamworth man to be elected to Parliament.