The Hibernia was built at Cowes in 1810. [2] Captain John Lennon was also her owner.

The Hibernia departed Portsmouth on 20 November 1818, however owing to a series of adverse winds in the Channel and again off the coast of Australia, her voyage was unusually long being 172 days duration.

There were many cases of fever and catarrh, which the surgeon attributed to inadequate warm clothing. He permitted the prisoners to use their own clothes if they had them.

The prisons also leaked water in bad weather. The swinging stoves and wind sails were used in an attempt to dry the prison and bedding and the prison was also fumigated several times.

One hundred and fifty-seven prisoners arrived in a healthy state, three having died on the passage out.

Officer commanding the guard, was Lieutenant Mee of the 83rd regiment.

The Hibernia sailed to Sydney in June with cabin passengers R.W. Loane, Edward Lord, Thoms Kent and B. H. Ainsworth.

While the ship lay in Sydney harbour convict stowaway Mercer Ludgate hid on board in an attempt to escape the colony. He was found before the Hibernia sailed however, and was returned to shore. As part of his punishment he was sent to the penal settlement at Newcastle.

The Hibernia departed Sydney bound for Calcutta via Batavia.

1). The Colonial Secretary's Papers reveal that a great deal of acrimony existed between Rev. Richard Hill and the surgeon Charles Carter.

2). Convicts and passengers of the Hibernia identified in the Hunter Valley region

Account of a gallant action between the merchant ship Hibernia, of London, Captain John Lennon, with sir guns and 22 men and boys, and the Comet American privateer, of 14 guns and 125 men: - 'St. Thomas's, January 27th, 1814. 'Captain Crabtree, of the brig Wasp, arrived here the 10th inst, from London. He states, that he fell in with a privateer to the westward of Saba, on the 9th instant; which, supposing the Wasp to be a man of war, made sail from her upon being chased. This privateer has for some time past been cruising to intercept the outward-bound ships for this island and St. Croix, and would no doubt have done much mischief, but for the very gallant conduct of Captain Lennon, and his ship's company.

'The Hibernia fell in with her on the 11th, having only twenty-two men and boys on board, and six guns. The privateer (we learn from Porto Rico, where she is now refitting) is the Comet, of Baltimore, Captain Boyle, mounting fourteen 12-pounders, and carrying 125 men. Against this very superior force, Captain Lennon and his little crew bravely defended the Hibernia, for nine hours, the greatest part of which time the two vessels were on board of each other.

The situation of the Hibernia, when she came into port, shewed the effects of the tremendous fire which the enemy must have kept up; not a sail which was bent escaped the enemy's shot, and her spars and rigging are much destroyed. Out of the small complement of 22, one man was killed, and 11 wounded; the latter, I am happy to say, are all doing well.

'Too much praise cannot be given to Captain Lennon for his conduct during this arduous undertaking; at the latter part of the action, he had only two or three men left, besides himself, at the guns: he has fortu- . nately escaped, but has received several contusions, and had two musketballs through his hat. The captain of the Comet acknowledges having three men killed and 11 wounded, but it is generally supposed he must have lost more.'- Naval Chronicle 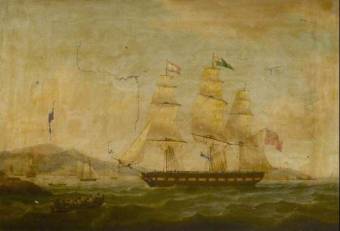