Bushranger at Maitland and Wollombi 1840's


Use the Search Box above to find your Hunter Valley Ancestor.
Patrick Bruen was 18 year old and employed as a cow boy in his native Leitrim. On 18 March 1835 he was sentenced to 7 years transportation for killing a sheep. He arrived in New South Wales on the convict ship Hive which was wrecked at Jervis Bay in December 1835.

His body lies buried in an unknown grave somewhere near Wollombi, forgotten almost as soon as the dirt was shovelled over him. His was an ignomious death and unlike other bushrangers Jack Donohoe, Martin Cash, Ben Hall and Ned Kelly who have all entered into Australian folklore and are renown for their daring, gentlemanly qualities or moral codes, Patrick Bruin's deeds died with him.

Patrick Bruen had some of the traits of these other outlaws - a downtrodden and cruelly punished man who took to the bush with daring and bravado. Although he brandished pistols he was never known to have shot anyone. He declined to rob a man of his last 2/6d., asking him instead to purchase grog. He ignored the perils of returning to the district he had escaped from and chose instead to attempt a rescue of his compatriot; and on his death bed Bruin revealed information that saved another man from an unjustified fate.

By early February 1843, he was perhaps already on the run from the iron gang. With another absconder he began a series of lightning fast robberies that kept the district from Maitland to Singleton and beyond on high alert for weeks.....The district has, during the last week been in a state of excitement and alarm, in consequence of the many depredations which have been committed by bushrangers, at various places on the road. On Saturday last a fellow, well armed, entered the house of Mr. Mark Green, known as the Old Red House, on the old road to Black Creek, and having bailed up Mr. and Mrs. Green he proceeded to plunder the premises. He took away with him a gun, two pistols, a quantity of Mr. Green's wearing apparel, and all the money he could find in the house. On Monday Mr. Benjamin Singleton was stopped near Harpur's Hill, and robbed of &pound11 ; and it is reported that several other persons were robbed in that neighbourhood, on the same day, and nearly at the same time.[2] 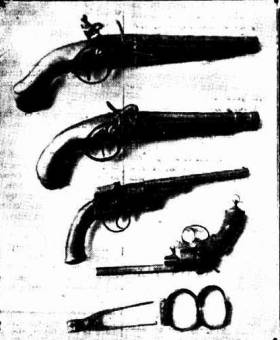 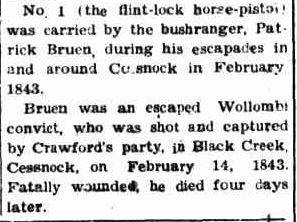 In a short space of time Patrick Bruin became known as a notorious and daring character - he had robbed Mr. Nowland and Robert Hungerford, son of Captain Hungerford, who was on his way from his station. He and his companion were captured and placed in the Wollombi lockup heavily ironed however Bruin managed to escape from the lockup, perhaps with his irons on, leaving his companion behind. The lockup keeper was later dismissed from his position.

He procured horses for himself and a ticket-of- leave man, and proceeded, well armed, in pursuit, giving direction to a constable and three ticket-of-leave men to scour the gulleys on foot, on the Maitland road, having ascertained from David Davis that Bruin had started in that direction. It is but justice to mention the praiseworthy conduct of' this settler, who, on the instant to avoid delay, furnished the police magistrate with the horses. We have heard that after the party in pursuit left the Red House, that the four men on foot proceeded to Bishop's Bridge, near Maitland, a suspicious locality, and that the police magistrate proceeded to Black Creek, where Mr. Macdonald, from previous suspicion of the bushranger's haunts, was able to give valuable information, and himself watched a hut from two o'clock in the morning until after sunrise.

Mr. Dunlop and his assistant immediately after proceeded in search, and soon came on a track, which, from a particular mark on the boot, left no doubt they were on the trail, which they followed for about four miles on the road to Patrick's Plains, where it was lost near a hut, one of Mr. Scott's sheep stations. The hut and all the surrounding ground was closely searched, and afterwards the party proceeded in trying to regain the track, and, whilst doing so, a heavy fall of rain obliterated all the nail marks ; but a man's track again appearing, it was followed until within six or eight miles of Patrick's Plains, where Mr. Dunlop gave information of the circumstances to the chief constable of that district about one o'clock on Sunday.[3]

Patrick Bruin made his way back to the Wollombi Road with the intention of rescuing his companion from the escort from Wollombi to Maitland. About seventeen miles from Maitland he bailed up Henry Smith but finding he only had 2/6d, declined to take the money, asking only for some spirits from Mrs. Nichol's public house. Thomas Crawford was his next mark.

About four o'clock in the afternoon, as Mr. Crawford was coming to Maitland in his gig, he was stopped by an armed man, about a mile on the Maitland side the Red House. When Crawford first saw him, he was secreted behind a bush, from which he darted with a musket and insisted on Mr. C. coming down from his vehicle. Mr. Crawford begged he would put down his gun, that his son (about ten years old) might be reconciled, who was then crying through fear that his father might be shot. He then asked Mr. Crawford's name, on hearing which, he said he wanted nothing but his money. It was known that a bushranger was in the neighbourhood, as he had stripped Smith a few minutes before, and Mr. Crawford was advised not to proceed ; he however did so, and two men, one a ticket of leave holder and the other an immigrant, followed him at some distance, thinking it very possible that the bushranger would attack him. In this expectation they were not deceived, and they came up just as he was plundering the gig ; on perceiving them he made for the bush, but they instantly fired at him, and both their shots took effect, one wounding him in the shoulder, and the other in the lower part of the back. The bushranger fell, and the two men coming up he was conveyed to the Red House, and was removed to Wollombi on Wednesday in a cart. His name is Brown (Bruin), and he had escaped from the Wollombi lockup only the Friday previous. The ball which penetrated his shoulder had lodged in his breast, and the man appeared to be in great torture ; when our informant saw him on Wednesday evening it was thought impossible that he could survive many hours. [4]

When captured had a double barrel gun and brace of pistols all loaded.

The police magistrate accompanied the cart in which the prisoner was conveyed to Wollombi and, having been informed by the Rev. Mr. Lynch, that he considered him in a dangerous state, he was left for the night at the Rising Sun public house. Patrick Bruin survived in agony for several days ....On Wednesday evening the bushranger, Patrick Bruen, breathed his last, after a week's suffering from the time he received the gun shot wounds that caused his death. The neglected situation of this man, and the repulsive appearance which he presented during his last days of misery tempts us to enquire what person had charge of him in his last illness ? He was left to die without surgical aid, or any other save the casual attendance of the humane inhabitants, in a dilapidated bark hut, his bedclothes saturated with the drenching rain, and swarming with vermin. He was buried without any form of judicial inquiry.[5]

Stung into a reply an anonymous writer to the press revealed that ....The Rev. Father Lynch remained with Bruin and everyting was done which under his awful circumstances humanity could suggest. There was no surgeon nearer than Maitland. Flood waters were rising at the Wollombi sweeping away crops, huts and animals in their path and the writer could do nothing but provide laudanum to relieve the suffering of Bruin. [8]

Bruin's life was over but his story had just a little more to tell......

On 13th April 1843 a man by the name of *John Maloney was before the Court on a charge of having robbed a man named Healy, a ticket of leave holder of &pound10 notes and presenting a gun at him threatening to blow out his brains......

The prosecutor could not be found. The prisoner had been committed early in March and incarcerated in Newcastle Gaol. The court were about to remand him when a person named (Jesse) Sharpley said he had been subpoenaed in the case, and he hoped the court would allow him to say a few words.

This permission having been granted, Mr. Sharpley said on the 14th of February a bushranger was shot on the Wollombi road, whilst in the act of robbing Mr. Crawford, and he was conveyed to Mr. Sharpley's house, where he remained until he died; he one day called Mr. Sharpley to his bed side, and said as he knew he was a dying man he had a confession to make ; there was a man named Maloney in custody on a charge of robbing a man on the road, but Maloney had not committed the robbery, as he (the bushranger) was the perpetrator of it, and he wished to ease his conscience before he died; if Sharpley would look in his bundle he would find two of the notes, and in the bottom of his trousers he would find five more, which he had taken from the man. Two days after making this declaration the bushranger died. Mr. Sharpley looked for the money as directed, and found it all in &pound1 notes, and he delivered it to Mr. Dunlop, the police magistrate at Wollombi. The court, on looking into the depositions, found that the robbery was laid as having been committed on the 12th of February, two days before the bushranger was shot, and the prosecutor did not appear to be very positive as to the identity of Maloney. Upon these grounds the court said if Mr. Sharpley would make an affidavit of the facts he had stated, so that it might be annexed to the depositions, Maloney should be discharged.[7]


*This was probably John Maloney who was born in the colony at South Creek and discharged from Newcastle gaol on13th April 1843.