Martin Cash arrived on the convict ship Marquis of Huntley in 1828.

Long before he became a bushranger in Van Diemen's Land, Martin Cash was assigned to George Bowman in the Hunter Valley in New South Wales. He was also (later) an acquaintance of bushranger George Jones. 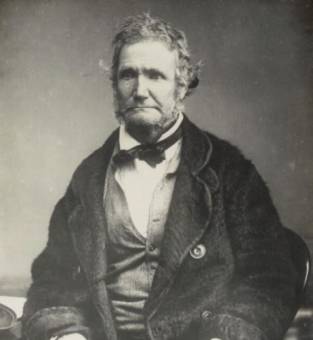 Although he was never a bushranger in the Hunter Valley the following excerpt from his memoirs from his time in the Valley make interesting reading.......

'Having now established a dairy at Hunter River, the cows at the latter place, when dry, had to be sent to the station where I resided, the duty of taking them having devolved upon me.

We had places appointed on the road where we put the cattle up for the night, and on one of these occasions I recollect a circumstance that occurred when stopping at Captain Pike's farm (called by the natives Bumburry Bumburry Garley) which will help to give the reader some idea of the position of assigned servants at the time in New South Wales

(John) Pike had then about forty assigned servants, all of whom on the night of my arrival had been served with a ration of Indian corn (quite soft and green), which they had to dry before grinding it in an old steel mill, and as it was the only one on the premises all hands were obliged to take their turn in succession. It would therefore be a late, or rather early, hour in the morning before all had their corn ground, after which they had to make it into bread for that night and the next day's consumption. This had to be done after the authorised hours of labour; in fact, I saw some of them at two o'clock in the morning awaiting their turn at the mill.

At Captain Pike's farm I have seen all the rations of meat for forty men weighed off in the lump, which afterwards had to be divided by the men into individual shares. Some of them by this process could not possibly receive the authorised complement of seven pounds for their week's allowance, being allowed but one draft on the whole. On this farm each man's ration for the week consisted of eight quarts of Indian corn, seven pounds of salt beef, with a daily allowance of three pints of skim milk.

I shall now have to beg the reader's pardon for detaining him so long on the way, and must beg of him, on the following morning to accompany me on the road through a magnificent county where, after travelling about two miles, we arrived at a watch-house in which was stationed a constable, and also that indispensable functionary, the flagellator - paid, I believe, by the Government for the accommodation of the settlers, or rather, the assigned servants, in each locality. A bench of magistrates presided here twice a week, and I had just arrived opportunely to see the flagellator in the performance of his office for the first time.

The case, I believe, was this: - An unfortunate man, for some discrepancy or other, was sentenced to receive on hundred and fifty lashes; but mark the manner in which the punishment was to be inflicted. On the morning in question he was receiving his first instalment of fifty lashes, braced up to a gum stump at the distance of about one hundred yards from the watch house; he was to receive the next two fifties on the two consecutive mornings. Of all the wretches attached to or in the employ of Her Majesty's Government there are none so truly contemptible as the flagellator, and in all my experiences through life I never knew a man with one redeeming quality that ever filled that odious office. I generally found them to be cruel, treacherous and cowardly; but I need not say more as the very nature of their duties precludes the possibility of any person discharging them who was not lost to every manly feeling.

I recollect a circumstance that took place on another occasion when collecting cattle at a place called Red Banks, on the Dark Brook Creek (DartBrook), higher up the Hunter River, where on passing the watch-house I observed a man braced up in front of the door, the flagellator having cat in hand in readiness to perform his part of the drama; the constable gave the prisoner orders to strip and, having done so, the flagellator casually asked him the name of the highest mountain in his country; the prisoner replied that Ben Lomond was considered the loftiest and by this time he was secured to the triangles. 'Well,' exclaimed the flagellator,'I'll make you believe in less than five minutes that you had Ben Lomond on your back'.

Having delivered the cattle I at once returned to the station, where I found two strange men who had apparently put up for the night. Hospitality abounded as far as circumstances permitted at these out stations, any want of which would be considered nothing short of a crime. However on taking a second look, I imaged that the face of one of our guests was not unfamiliar to me, and recollecting my self for a moment I asked him if he was not known as Jemmy the Locust. He replied that he was not but that he wished he was.

His last observation put me a little out of temper as it confirmed me in my suspicion that I was addressing the right person; but, not being quite certain as to his identity, and before resorting to extreme measures, I immediately repaired to the station in our vicinity, knowing that one of the stock riders could set me right as to my conjectures. It was at this station he should have put up his cattle for the night had he not been afraid of being recognised, the owner of the cattle and the proprietor of the station being nearly related. On finding my suspicions correct I at once retraced my steps, but Jemmy the Locust had too much good sense to wait my return, having decamped in my absence.

In explaining this matter I must observe that some time previous a prisoner named Daley** had taken to the bush and by his daring conduct had rendered himself very notorious. A reward had been offered for his apprehension, and at this time he was harboured by Jemmy the Locust, who was an assigned servant to Dr. Francis Little and employed as a shepherd at Gammon Plains; he invited Daley to visit his hut at a given time, on which he treacherously fired on him with a gun loaded with slugs cutting away the lower part of his intestines. The wretched man expired in a few minutes after, and for this service Jemmy the locust got a ticket of leave - the reward, however, he did not get, the authorities having condemned his cowardly mode of procuring it; and it was this circumstance that interfered with my hospitable intentions on that night.'

1). **Daley who was shot by Jemmy the Locust, belonged to the bushranger gang Hunter River Banditti.

2). An Excerpt from 'Martin Cash, The Bushranger of Van Diemen's Land in 1843-44: A Personal Narrative of his Exploits in the bush and his experiences at Port Arthur and Norfolk Island., 32,000 with illustrations, 7th edition, Hobart: J. Walch and Sons, 1961.

3). The Ballad of Martin Cash has been attributed to Francis MacNamara (Frank the Poet)