The Mary was the next convict ship carrying female prisoners to leave England for New South Wales after the departure of the George Hibbert in July 1834.

One of the women, Elizabeth Cook came from Newcastle-upon-Tyne. Elizabeth was typical of the convicts of the Mary. She was 25 years old, could read and; write and gave her occupation as all work. The Newcastle Courant dated 14th March 1835 gave a lengthy account of her trial at the Northumberland Assizes when she and her accomplices were charged with stealing....

Elizabeth Cook, Mary Ann Brown and Alice Holmes, three women of the town were next place at the bar, charged with stealing on 2nd February in a house of ill fame in Silver street from the person of James Copland, a Bank of England note of 50 pounds and two of 20 pounds each.

The convict indents reveal that Elizabeth was 'stout made' with a dark ruddy complexion, brown hair and grey eyes.

Elizabeth Cook may have been incarcerated in the gaol at Carliol Square. The Carliol Square gaol was built in 1823-1828 and stood for almost a century before being demolished in 1925. Many thousands of criminals would have seen the inside of the cell walls over that time.

The Tyne and Wear Archives ans Museum have published a set of portraits of criminals from the early 1870's.

The portraits are of men and women, both young and old. Many had been incarcerated for petty crimes that forty years earlier would have seen them sentenced to transportation.

Transportation to New South Wales ceased in 1840 and although the likenesses of these prisoners were taken thirty five years later it is not hard to imagine that the sorrow, hardship and poverty etched into their faces would have been equally evident on the faces of the convicts of the Mary.

They had remarkably fine weather on the passage out and very little sickness. The few cases of diarrhoea were very slight and the scurvy that appeared within a few days of the Line yielded to a little extra lime juice with wine and sugar. The women managed the cleaning of the prisons extremely well so that there was no necessity the whole passage to have any of the sea-men down in the prisons and the women kept themselves remarkably neat and clean without any trouble. There were three prisoners who died; one of them Catherine Figgans, came on board in an already debilitated state with her nine month old child.

John Inches thought the first Officer Mr. Simson, although he was only young, did his duty well throughout the voyage. There was no trouble keeping the women and sailors apart.[2]

The Mary arrived in Port Jackson on 7 September 1835 almost a month after her estimated arrival date. One hundred and seventy-seven prisoners and 26 children survived the voyage.

The women were mustered on board on 10th September 1835. One woman had died on the passage and four were sent on shore to the hospital.[4]

Mary Ellis was the youngest female on the Mary at only 14 years of age. The indents record that she was a nurse girl from Liverpool. Mary was convicted of stealing a coat at Lancashire on 26 January 1835 and sentenced to 14 years transportation. She was only 4ft 8 3/4 in with a dark ruddy complexion, brown hair and three moles on her left cheek.

The indents reveal details of each of the convicts - name, age, religion, education, marital status, family, native place, trade, offence, date and place of trial, sentence, prior convictions, physical description and occasional details of relatives already in the colony or about to arrive......

Jane MacDonald's husband John Bate MacDonald had been convicted a year previously
Elizabeth Buck's brother James had arrived by the previous prison ship
Ann Nathan's sister Catherine Nathan arrived three and a half years previously as a free passenger on the Eliza
Maria White's half brother John Trap arrived in the colony four years previously
Mary Bullman's brother Terence Rowe had been transported twenty years previously
Ann Watson alias Watts alias Hallibutt was the wife of Thomas Hallibutt who had been convicted at the same time
Mary Ann Breese's husband John Breese had been convicted at the same time
Grace Draper's brother Thomas Gibbs had been transported seven years previously
Mary Davis was mother to Mary Ann Davis who arrived on the same vessel
Ann Coates junior and senior also mother and daughter on the same vessel
Ann Tyson had a sister in Van Diemen's Land who arrived on the Numa in 1832
Mary Ann Allam had a first cousin Elizabeth Hawkins who arrived free on the David Scott and was a wife of Thomas Powis in George St. Sydney.

The prisoners remained on board until Thursday morning 17th September when they were disembarked at the Dockyard and assigned to various applicants. 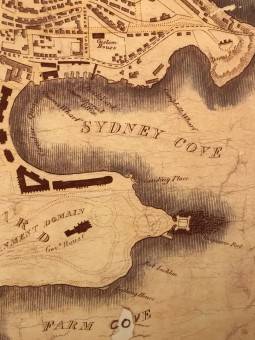 On the evening of the 17th, twenty-nine women were placed on board the Sophia Jane steamer for conveyance to Newcastle where they were to be held in the Female Factory until assigned for service. (1)

The Female Factory at Newcastle at this time was administered by John Field who had charge of the Newcastle gaol and his wife Eliza Field who was Matron of the female section of the gaol. They had been appointed to the positions the previous July.

Two days after the prisoners of the Mary arrived in Newcastle a destructive hail storm hit the little township... Rev. John Dunmore Lang writing under the pseudonym Ashmole later described this unusual event -

'On Saturday the 19th of September [1835] the town of Newcastle on the Hunter, was visited by a thunder-storm, the recollection of which, from its accompanying phenomena, will not soon be obliterated from the memory of its inhabitants. On the day preceding there had been a hot wind from the N.W., the thermometer in the shade under my verandah having stood at 84 at 4 P. M., and the evening having set in with lightning to the S. S. E. and S. W., the thermometer at 8 P. M. having showed 70, while showers fell at intervals during the night, to the great refreshment of the cattle after so long a period of dry weather. At 8 A. M. on Saturday the 19th, the thermometer stood at 62, the morning being dark and showery, and at 2. P. M. it had risen to 66. On a sudden, while sitting in my house--the roof of which is by no means one of the strongest --after a flash of lightning accompanied by thunder, I was roused by a loud noise as if the rafters had given way, and the whole roof were coming down; my impression being at the moment that the house had been struck by lightning, I immediately ran out, and was soon put in possession of the cause of my alarm, when I beheld large masses of ice falling with the utmost fury from a dark cloud, which was moving with considerable velocity in a direction from about S. W. by S.

In the space of five minutes the ground was as white as it would have been in England, had it been covered to the depth of an inch and a half with snow. The thermometer immediately fell to 63. The hail-stones which descended in a continuous torrent, varied in size from five to six inches in girth, and were generally either studded with the projecting points of the various chrystals, and they were highly pellucid. In the centre of each crystaline mass was a circular opaque body, of the size and appearance of a common hail-stone, which it would seem in each case, in its way towards the earth, had passed through a cloud, whose watery particles became frozen, and adhered to it in its descent. This storm of ice was succeeded by one of common hail of short duration, which was also followed by heavy drops of rain, and the remainder of the afternoon continued showery with thunder, lighting, and wind; several fowls were knocked down in the storm, and lay on the ground as if senseless; branches of flowering shrubs and shoots of the vine were cut off, and many panes of glass in the windows of the church and houses were broken, and had the wind been blowing hard at the time, and the direction of the storm been less perpendicular, much more serious damage would probably have been done.

* One remarkable feature in this storm, in addition to that of the magnitude of the hail-stones, consisted in the number of them which fell during the six minutes that it continued to rage; and so thick and solid were they, that several were picked up in a sheltered situation four hours after they had fallen. It is not often that hail-storms of such violence occur amongst us' (3)

The prisoners of the Mary who were sent to Newcastle and were still incarcerated in the Female Factory when the above storm hit were:

1). Only two vessels carrying female prisoners arrived in New South Wales in 1835, the Mary and the Neva which was Wrecked at King Island. There were no prisoners convicted in Scotland arriving on the Mary.

3). Chief Officer of the Mary, Mr. Simson threatened by a seaman in Sydney (Sydney Gazette 12 September 1835)

4). Hunter Valley convicts / passengers arriving on the Mary in 1835

6).Captain William Ascough made his fortune as a ship's captain and owner bringing convicts to the Colony in the ships.......


William Ascough became an extensive landowner. He died tragically in 1836.