Windows, furniture, clothing all were wantonly destroyed; while the procession from the prison to the convict ship was one of brutal, debasing riot. The convicts were conveyed to Deptford, in open wagons, accompanied by the rabble and scum of the populace. These crowds follow the wagons, shouting to the prisoners, defying all regulations, and inciting them to more defiance of rules. Some of the convicts were laden with irons; others were chained together by twos.

Mrs. Fry addressed herself first to the manner of departure, and, rightly judging that the open wagons conduced to much disorder, prevailed in the Governor of Newgate to engage hackney coaches for the occasion. Further, she promised the women that, provided they would behave in an orderly manner, she, together with a few other ladies, would accompany them to the ship. Faithful to her promise her carriage closed the line of hackney coaches; three or four ladies were with her, and thus in a fashion at once strangely quiet and novel, the transports reached the place of embarkation.

There were one hundred and twenty-eight convicts that day; no small number upon which to experimentalize. As soon as they reached the ship they were herded together below decks like so many cattle, with nothing to do but to curse, swear, fight, recount past crimes, relate foul stories, or plot future evil.

True, there was some attempt at order and classification, for they were divided into messes of six each, and Mrs. Frey eagerly seized upon this arrangement to form a basis of control. She proposed to the convicts that they should be arranged in classes of twelve, according to ages and criminality; to this they assented. A class thus furnished two messes, while over each class was placed one of the most steady convicts, in order to enforce the rules as much as possible, she provided in this way for superintendence.

The next arrangement concerned work for the women, and instruction for the children. Accordingly the ladies looked about for plans and methods whereby the enforced weariness of a long voyage should be counteracted. They had heard that patch work and fancy work found a ready sale in NSW so they hit upon a scheme which should ensure success in more ways than one. Having made known their dilemma, and their desires, they were cheered by receiving from some wholesale houses in London sufficient remnants of cotton print and materials for knitting to furnish all the convicts with work. There was ample time to perfect all arrangements seeing that the ship lay at Deptford about five weeks; as the result of Mrs. Fry's journeys to and fro, every woman was given the chance of benefiting herself. In this was they were informed that if they chose to devote the leisure of the voyage to making up the materials thus placed in their hands, they would be allowed upon arrival at the colony to dispose of the articles for their own profit. Provision was also made for instruction of both women and children on board ship. Out of the batch on board this vessel fourteen were found to be of an age capable of instruction. A small space was set apart in the stern of the vessel for a school room and there daily these waifs of humanity learned to read, knit and sew. Almost daily for five weeks, Mrs. Fry visited the vessel labouring to these good ends. Ultimately however the Maria had to sail-
Elizabeth Fry - Internet Archive [4]

The Naval Agent Captain Young R.N. came on board on 30th March and desired that the women be allowed on deck which indulgence the surgeon reported, was allowed to continue throughout the entire voyage weather permitting. 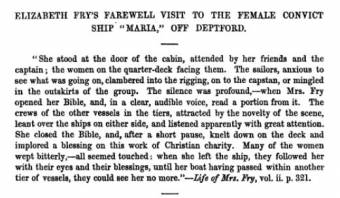 Saturday March 7th, Rec'd my appointment from the Navy Office and joined the ship at Deptford. Monday 16th...Rec'd on board Rody Jones and examined her that she had no contagious diseases and is in a fit state to proceed on the voyage.

The following day more convicts began to arrive and the surgeon examined each one as to their state of health. When the women first came on board from the different county gaols a great number of them through exposure to cold by travelling, became affected with coughs and colds, however few had illnesses of any consequence. [6]

The women were given an allowance of wine and lime juice throughout the voyage. The surgeon established a routine - at 9am he attended to the sick list; and set times were kept for meals - 8am breakfast; 12 o'clock dinner; 4 o'clock supper. The prison was kept clean and fumigated and sprinkled with vinegar throughout the voyage; the windsails were kept going constantly in the warm weather.

Thomas Prosser remarked that one of the women was in the habit of voiding in her sleep and became a perfect nuisance to the ship. The itch also made an appearance which he put a stop to by separating them from the rest of the women and using sulphur internally and externally. Costiveness and amenorrhea troubled the women all the voyage.

The women were constantly in the habit of stealing from each other the whole of the passage although the only mode of punishment that was employed was to separate the women from each other. [6]

The Maria arrived in Port Jackson on Tuesday 17 September 1818.

On Monday 21st September the berths and decks were cleaned. At 9.30am John Thomas Campbell, Colonial Secretary and William Hutchinson, Superintendent of Convicts came on board at Sydney. The women were all mustered and examined. There were no complaints made against the captain or surgeon. Governor Lachlan Macquarie recorded in his Journal-

Thursday 17. Septr. 1818 ! This forenoon anchored in the Harbour the Female Convict Ship Maria Commanded by Capt. Henry Williams, and of which Mr. Prosser of the R. Navy is Surgeon Supdt., with 124 Female Convicts - and 25 Children from England - from whence She finally Sailed on the 18th. of May last. - The Female Convicts have all arrived in good Health; - but two out of the original number of Women embarked have Died on the Passage. Mr. John Wood, a Free Settler of the first Class, with his Family, has come out Passenger on board the Maria.

John Wood was later asked by the Governor to give his opinion of the behaviour of the female convicts on the voyage out and in a letter dated 26 September 1818 he replied:

In answer to your letter of the 24th instant, I have great pleasure in stating that the female convicts on board the Maria in general conducted themselves with great propriety and altho' as might reasonably be expected some irregularities did take place, yet I conceive no blame was imputable to the officers [3]

Sixty women were transhipped by the Elizabeth Henrietta to Hobart and Port Dalrymple late in September.

On 28th September 1818 orders were issued regarding twenty six women who had been disembarked from the Maria and were to remain in New South Wales. Eighteen were to be sent to the Female Factory at Parramatta and the other eight were to be privately assigned.

Francis Oakes was Superintendent at the factory at this time. Commissioner John Thomas Bigge gave evidence before the Select Committee in 1819 regarding the distribution of female convicts and their transfer to Parramatta.

Those privately assigned were :

Those sent to the factory:

Fate of Some Female Convicts

Back in England as time went on many anxious remembrances and hopes were cast after the convicts who had been shipped to NSW. To her sorrow, Mrs. Fry found from the most reliable testimony, that once the poor lost wretches were landed in the colony, they were placed in circumstances that absolutely nullified all the benevolent work which had gone before and were literally driven by force of circumstances to their destruction. The female convicts from the time of their landing were without shelter without resources and without protection. Rations or a small amount of provision sufficient to maintain life, they had allotted to them daily; but a place to sleep in or money to obtain shelter or clothing they were absolutely without. - Elizabeth Fry - Internet Archive [4]

The Maria departed the colony in October 1818. Those advertising their intention to leave on her included: William Batchelor, John Welch, Charles Pollard, Thomas Mitchell, John Jones and William Hamilton.

Surgeon Thomas Prosser took his passage home in the Glory.

1). Eighteen convict ships arrived in the colony in 1818. Of these three transported female prisoners - the Elizabeth, the Maria and the Friendship. A total of 282 women arrived on these three vessels in 1818.

2). Convicts and passengers of the Maria identified in the Hunter Valley

[3] Colonial Secretary's Papers, John Wood Reporting on the general good conduct of the female convicts on the Maria. Reel 6006; 4/3499 p.79