'We had not long been anchored at Spithead a detachment of the 80th regiment came on consisting of forty five soldiers and five or six wives to some of the men and now devolved upon me the honourable office of marking the blankets and other articles destined for the use of the convicts..........

The captain, with his wife and her sister, and the surgeon, joined us at Spithead, and a major, a lieutenant, and an ensign came on board as officers commanding the guard: these formed the elite company of the vessel. Everything being now in readiness, our cargo of convicted sin was brought alongside in launches, each individual member being clad in an uniform of pepper and salt of the most rigid economic cut, their brows being surmounted by woollen caps corresponding in style to the rest of their dress. One leg was also embraced by an anklet of iron supporting a chain of the same precious metal carried up to the waist.

I expected to have encountered an ill-looking set of scoundrels, with ferocity depicted under every guise; but the motley group that scrambled up the sides were a hale, hearty, freshlooking set of fellows, humble and submissive as lambs: there were no men above the middle age amongst them, although I observed two or three complete boys. We had mechanics of all trades, tailors, shoemakers, butchers, weavers, carpenters, blacksmiths, whitesmiths, locksmiths, tinsmiths, cabinet-makers, workers in brass and gold, engravers, bakers, pastrycooks, farmers, miners, itinerant musicians, glee singers, strollers, and gipseys; and, with reluctance be it spoken, in the list I must include two solicitors and two master mariners.

The sun had dipped below the horizon, when the last of our 310 manacled specimens of zoology was tallied in board, and there was something painfully humiliating in the spectacle of so many human beings huddled together like a flock of sheep: they moved in the same helpless mass at the word of command, just as the said sheep would at the bark of the shepherd's dog; and notwithstanding they had been guilty of crimes which had brought their own punishment, I felt my sympathies strongly enlisted in behalf of the poor fellows, and for a while forgot my own troubles in commiserating theirs.'

The Guard consisted of 32 rank and file of the 80th regiment under the orders of Major James Winnett Nunn, Lieut., Lockhart, Ensign Kelson. Seven women and four children, wives of the soldiers came passengers. One of them, the wife of Major Adgerson, bandmaster of the 80th regiment took ill in May and was treated by Francis Logan. Other passengers included Mrs. Carr and Mrs. Alcock.

Description of the Interior of the Mangles

Edward Lucatt - 'For the information of those who have never seen a prison-ship, let me describe it. The whole body of the vessel between decks, from the after-hatch to the fore-hatch, is partitioned off by strong stanchions studded with heavy clout nails, placed so as to prevent the possibility of their being sawn or cut through, apertures being left in the stanchions [to admit of the discharge of musketry upon the prisoners in case of their proving refractory.

Two tiers of bunks or standing bed-places are ranged one above the other on either side of the space so partitioned off, each bunk being allotted for five men; and down the centre of the vessel run two ranges of hammocks. Part of the crew were berthed abaft the after-hatchway in the dark hole already alluded to, and the remainder had their abode forward of the fore hatchway, which I subsequently learnt was called the forecastle.

From curiosity I did penetrate the saturnine region, and, if possible, the murky den was worse than the dark hole. A man's house is called his castle, but why these gloomy, dark, pestiferous pits should receive the name, I am at a loss to determine.

The prisoners' lodgings were better than the crew's. Two cooking ranges, or galleys, as they are called, occupied the bow of the vessel, covered in by a deck from the high bulwarks which rejoices in the stately name of top gallant forecastle; the after part of the vessel was occupied by a raised deck called the poop, corresponding with the top gallant forecastle, and beneath this poop were the cuddy and state rooms for the passengers, spacious and elegant, my wretched crib forming the very bathos to these accommodations.

The quarter deck, that part of the upper deck abaft the mainmast, was separated from the waist, or that portion of the deck forward of the mainmast, by a strong barricade, the quarter deck being allotted for the crew, the waist for the prisoners, and the poop for the officers, etc. The soldiers of the guard were lodged in my fashionable locale, their bunks being arranged similar to those destined for the prisoners. For the breadth of the vessel in that part (a fact I could not at first distinguish) was divided by a stout bulkhead, and what I took to be the side of the vessel, after experience showed me was only a separating partition.' [1]

Edward Lucatt described the day the Mangles departed England giving the date as 7th March although other sources date departure on 23 March 1837.........

Hitherto I have not been particular as to the day of the month, but this was the memorable date of our leaving Old England's shores. What a melancholy sound that heaving at the capstan had! the jarring and grating of the cable as it came slowly in at the hawse holes had a similar effect upon my nerves; and with every clank of the chain as they dragged it along the deck, my hold upon my country seemed dwindling away. But I hadn't long for the indulgence of sorrowful fancies. The talent of one of the itinerant musicians was put in requisition; seated upon the capstan head, with a shrill fife he struck up a lively air, and away we gyrated with the capstan bars spinning round and round with a 'stamp and go,' keeping time to the measure: the anchor was aweigh, the wind was fair, and I soon took my farewell gaze at Britain. [1]

On 7th March, soldier Robert Shufflebottam became ill after taking a chill on the boat from Chatham. The surgeon remarked that Shufflebottam had only been released from jail a few days before and was greatly debilitated and inadequately dressed. Shufflebottam never fully recovered and died on 20th April at sea. Convicts John (or George) Martin and Mark Osborne took ill with dysentery the day the vessel departed. Both also later died.

According to the surgeon the cases of dysentery were occasioned by the wetness and filth from the water closets as all the cases which occurred were in the beds that the drainage came down on. [3]

There were fifty-nine cases of scurvy. William Westwood (Jackey Jackey) was only seventeen years old when he fell ill with scurvy in May. In the indents he was described as an errand boy from Essex under sentence of 14 years transportation for stealing a coat. He was 5ft 5in with a ruddy complexion and brown hair and dark grey eyes. There was a scar on the back of his right hand and the marks 1831, Jan 3 1820, Aug 1, and blue illegible mark on the lower left arm. On the back of his left hand was a sun. Under Francis Logan's care, he soon recovered and went on to become one of Australia's best known bushrangers. He was hanged at Norfolk Island in October 1846. Read more about Jacky Jacky the Gentleman Bushranger here.

On June 23rd the Mangles had been out 91 days and was at latitude 41° 6' S, longitude 103° 11' E. She spoke the poorly provisioned Heber off Cape Lewin and supplied them with two sheep, some wine and other necessities before the two ships parted company.

The Mangles arrived in Port Jackson on the 10th July 1837. 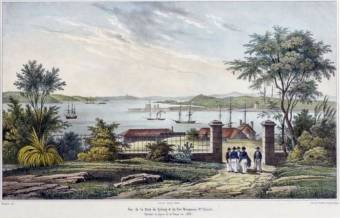 It was midnight when we entered the Heads of Port Jackson, and after our long sojourn upon the waters, it appeared almost as if we were entering the gates of Paradise; the moon, which was riding high in the heavens, imparting by its effulgent brightness a fairy-like charm to the scene.

A pilot came alongside us in his boat, and to meet with and hear the voices of our countrymen at this distance from home, produced upon me a strange and startling effect, although I knew the country had been made the recipient of our outcasts for half a century.

The harbour is a magnificent one: at the mouth of it the cliffs on either side, called the 'Heads,' rise like a wall several hundred feet high; a lighthouse is built on a salient point of the South Head, which may be distinguished in clear weather from eleven to twelve leagues at sea. The harbour is not only spacious, but completely sheltered; it runs inland nine or ten miles, indenting the coast on either side, forming numerous romantic bays and coves, in all of which there is depth of water for shipping of any tonnage; several smaller islands are grouped about, which add to its safety and picturesque beauty. Although it was the depth of winter, the air was mild and balmy; and so placid was the deep as we glided over its silvery ripples, I could fancy we were taking a moonlight cruise on Westmoreland's lovely lake Windermere, nor did I quit the deck till the anchor was let go in Sydney Cove.

With daylight much of the enchantment vanished, as there is a duskiness and want of verdure in the appearance of the shores, which impresses you with notions of drought and sterility. The town, viewed from the water, wears a paltry aspect; and the residence of the governor of the colony, in a park-like inclosure just without the bustle of the town, is a mean, low building, possessing as much architectural grace as that usually displayed in the elevation of a barn.[1]

The prisoners were mustered on board on Saturday 15th July before being landed in the following couple of days. Six of the men were considered very bad characters and they were ordered to be kept at labour on the public works immediately on arrival - James Cotton, William Kensey, John Jones, Richard Ward, Samuel Hulbert and Robert Woolley.

Most of the prisoners were in their twenties or early thirties. Twelve were under the age of fifteen, the youngest being William Hellingworth, George Head and Sebastian Allner who were only 14 years old. The oldest convict on board was Adam Gibbs who was 64. [4]

According to the Sydney Herald the Mangles brought out a large number of iron gratings for the sewers at a cost of £1500.

The Mangles sailed for China on Sunday 14 August 1837.

1). Francis Logan was also employed as surgeon on the convict ships Fanny in 1833, Champion in 1827 and the Royal Sovereign in 1835

4). National Archives. Reference: ADM 101/47/8 Description: Medical journal of the Mangles, convict ship, for 3 March to 15 July 1837 by F Logan, surgeon and superintendent, during which time the said ship was employed in a passage to New South Wales