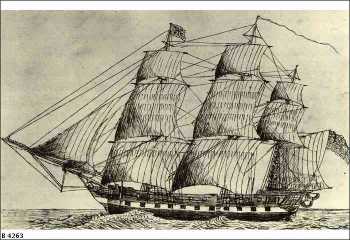 
The Buffalo began life as a merchantman named the Hindostan, launched in Calcutta in 1813. After the maiden voyage to England she was purchased by the Royal Navy and re-named HMS Buffalo. The Buffalo was used to carry timber and as a quarantine ship, and in 1833 was fitted as a convict ship to carry female convicts to New South Wales. In 1840 the Buffalo was used to transported prisoners from Lower Canada to Australia.

This voyage in 1833 was John Hamilton's only one as Surgeon Superintendent of a convict ship. A Medical Journal was kept from 17th May to 10th October 1833.

The prisoners were embarked on the Buffalo between 17th April and 3rd May 1833 - John Hamilton kept a detailed record of the prisoners' arrival....

21st April the Buffalo slipped from the buoy in Warren's bight and dropped up the harbour to repair the decks which had been found to be leaking over the prison. They then continued to board the rest of the women:

22 April 1833: Received two convicts from Nottingham and one from the penitentiary.

23 April 1833: Received two convicts from Portsmouth and one from Wales.

24 April 1833: Received four convicts from Chester and one from Derby.

26 April 1833: Received seven convicts from Bristol, five from Dundee, three from Perth and one from Oxford and two children.

27 April 1833: Received one convict from Jedborough, four from Paisley, one from Stirling, 16 from Glasgow, 22 from Edinburgh, 1 from Morpeth, 7 from Nottingham, 2 from Cardiff, 2 from Norwich, 3 from Maidstone, and 11 children.

After embarking the last of the convict women on 3rd May, the Buffalo departed from Portsmouth on 12 May 1833. All the women were confined below in consequence of them being in the way of the working of the ship out of the harbour.

They put into Rio de Janeiro on 28th July.

On 13th September the Buffalo arrived at King George Sound in Western Australia.

The Perth Gazette reported in February 1834: The Buffalo arrived at the Sound on the 13th September with Sir Richard Spencer the new Lieutenant Governor; Lady Spencer, and nine children, and eleven servants, chiefly agricultural labourers. Sir Richard brought out some live stock from England with which to stock his own Estate, and other requisites for a settler who sits down on his farm, which is to be his future stay, and that of his family. On his arrival, he found 36 souls forming the Settlement at King George's Sound, composed of two or three settlers and their servants, and the officers and troops sent there for their protection. The Government at Swan River had neglected to send the usual supplies for the troops and when the Buffalo arrived, their rations had been reduced to four oz of peas and half a pound of flour a day, for each person; they had, however, abundance of vegetables, fowls, eggs, pigs etc., Previously to leaving England, Sir Richard had stipulated with the Government, that no prisoners should be sent to the Settlement. During his stay, Doctor Hamilton explored the country in the vicinity of the Sound; he described the soil as being of good quality and made a collection of plants which were later pronounced by Mr. (Richard) Cunningham to embrace a greater variety than can be found elsewhere in the colony.

Extracts from Captain's Log. Journal of proceedings of H.M.S. Buffalo from August 13 1833 to March 31, 1840 kept by R.W.R. Sadler, master commanding, Captain Hindmarsh and others

10/9/1833 Put the ship's company on two thirds allowance of bread; only 33 days allowance on board, making up the deficiency by the issue of flour in lieu. Cape Chatham 265 miles distant ;

5/10/1833 - Running for and working up the harbour of Port Jackson. At 6am we bore up for the entrance of Port Jackson, fired a gun, and hoisted the signal for a pilot. At 7.30 am hove to, and pilot came on board. 8am strong breeze working up Port Jackson. 9.30am hove to awaiting permission from the pratique office to sail up the harbour; 11am made sail.11.50am in standing into Sydney Cove the ship missed stays to the baffling winds let go the small bower in four and a half fathoms, and found she hung by the keel. Ran out a hawser to windward, and hove in on the small bower, and hauled the ship into a mooring berth. In touching the ship did not receive the slightest injury.

The only punishment the surgeon noted on the voyage was that of Mary Murphy and Elizabeth Sedgley for disorderly conduct by putting them on bread and water for two days.

The only death was that of Susan Kent who died from inflammation of the lungs on 5th May.

One hundred and seventy eight women were landed (Helen McNab from Scotland had been re-landed before sailing and Susan Kent died on the passage). On the 7th October Louisa White, Ann Clark, Caroline Higgins, Mary Lee as well as prisoners washing their clothes were sent to the Hospital in Sydney. Mary Lee died in Parramatta Hospital 6th November 1833.


9/10/1833 - The Deputy-Assistant Colonial Secretary came on board, and mustered the convicts.

16/10/1833 11.45pm sent four men, armed, on board the revenue cutter, per request of her commander, he understanding an attack was to be made on her by convicts

The convict indents include such information as name, age, religion, education, marital status, family, native place, trade, offence, when and where tried, sentence, prior convictions and physical description. There is also occasional information about pardons, colonial sentences and deaths. The youngest prisoners were Mary Ann Robertson and Catherine Glen who was considered an idiot, both age 14. There is no information in the indents as to whom the women were assigned on arrival.

The indents have details of those women who had relatives already in the colony or about to arrive. Some may have been fortunate enough to be assigned to their relative or perhaps nearby..........

Fifty two of the prisoners had been convicted in Scotland........

23/10/1833 - Returned convict stores to the department of the commissariat. While employed on this duty Charles Legitt left the boat, threatened to strike Mr. Boys (mate) when ordered down to the boat, calling him out to fight, during which time he called the said officer a very opprobrious epithet in the streets of Sydney

24/10/1833 - Employed taking down prison fittings, smoked and fumigated the main deck. William Howett, Bosun's mate, was brought on board by two constables, he having been kept in gaol and taken before the Magistrates for the riots when he had committed with his officers on shore

After departure from Port Jackson, the Buffalo sailed to New Zealand to procure a cargo of Kauri topmasts for Government for the return voyage to England.

The Buffalo then proceeded via Cape Horn, Staten Island, Falkland Islands, Cape Frio, Rio Janeiro, Trinidad, Flores Island and so on to the Lizard, England, where she arrived 18 November 1834. The Buffalo remained at Portsmouth from 19 November 1834 to 7 January 1835. The ships log up to that date were signed F.W.R. Sadler, master commanding. The next section of the log runs from 23 April 1836 to 26 July 1836 and is signed J. Hindmarsh, captain. [1]

Buffalo, Store Ship - Master Com. F. W. R. Sadler, 17th Nov 1834 arrived at Plymouth from New Zealand. - The Buffalo has made a most interesting voyage. It will be recollected that she embarked female convicts, at Portsmouth, in May, 1831, and, taking on board Sir Richard and Lady Spencer, with a family of nine children and twelve servants, she sailed on the 12th of that month,* with the party, and complete stock, for a new colony in Western Australia. On the 18th September the party was landed all safe in King George's Sound, which affords good and safe anchorage, especially Princess Royal Harbour, which is situated at the head of the Sound. The Buffalo proceeded from hence to Sydney, where she landed her convicts, all in perfect health; and, on the 10th Nov. 1833, sailed to her destination, New Zealand, to procure a cargo of Kowri topmasts, in which she has completely succeeded, having brought to England the finest cargo ever imported, loaded partly at Keahou, entrance to the river Thames, and part at Wanaroa - notorious for the horrid murder of Capt. Thompson, and the crew of the Boyd merchant ship, in 1809. Mr. Sadler, who appears to have made himself thoroughly acquainted with that part of the country, describes the natives as lively and good natured, though beyond all doubt, cannibals. They are a fine, stout, athletic race of men....Nautical Magazine

In 1836-1837 the Buffalo was employed to taking the new settlers to South Australia. (United Services Magazine)

The Buffalo was wrecked on 28th July 1840. The Sydney Gazette reported that she was wrecked at Mercury Bay while loading with spars for England during one of the heaviest gales ever experienced on that coast, she having driven ashore with six anchors ahead. The only lives lost, were those of a man and a boy.

3). Forty seven convicts of the Buffalo have been identified residing in the Hunter Valley region in the following years. Select HERE to find out more about these women.

4). The Buffalo was one was one of five convict ships bringing female prisoners to New South Wales in 1833, the others being the Surry, Fanny, Caroline and Diana. A total of 639 female convicts arrived in the colony in 1833.