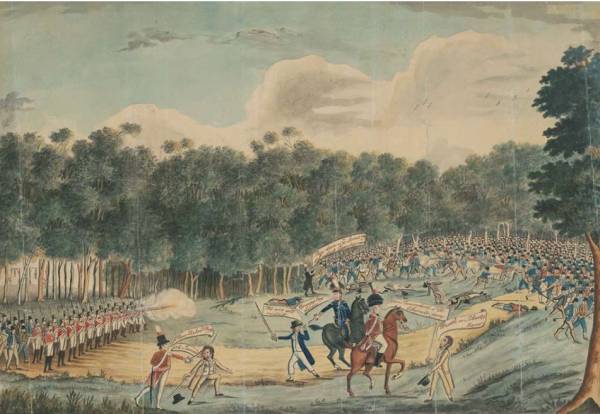 
The Sydney Gazette reported on the now famous rebellion in 1804:

Major Johnston on arriving at Toongabbee, received information that a considerable Body were on their way to the Hawkesbury: Notwithstanding the fatigue of his small Detachment in marching up from Sydney and the distance they had gone since, they immediately ran in good Order, with their followers, and after a pursuit of Seven Miles farther, Major Johnston and a Trooper, who had preceded the Detachment came up with the rear of the Insurgents at 11 o'clock, whose number have since been ascertained to be 233 men, armed with Musquets, Pistols, Swords etc., and a number of followers which they had taken from the Settlers.

After calling to them repeatedly they halted, and formed on the rise of a Hill: The Major and Trooper advanced within pistol shot, and endeavoured to persuade them to submit to the Mercy that was offered them by the Proclamation, which they refused. The Major required to see their Chiefs, who after some deliberation met them half way, between the Detachment and Insurgents, when by a great presence of mind and address the Major presented his pistol at the head of the Principal leader (Phillip Cunningham), and the Trooper following his motions, presented his Pistol also to the other leader's head, (Wm Johnston) and drove them into the Detachment without the least opposition from the body of the Insurgents.

Major Johnston immediately ordered Quarter Master Laycock to advance with the Detachment etc. and cut the body to pieces, which immediately filed off and fled in all directions, pursued by the Detachment and followers, several shots were fired by the Insurgents without effect. As the pursuit was along the Road and on each side in the Woods, the number of dead are not yet ascertained; nine bodies were found above the Road, and several were known to be killed in the pursuit through the Woods. A number were overtaken and made prisoners, among whom was the Leader (Phillip Cunningham), who was to all appearance left dead on the road. The pursuit continued on to the Hawkesbury, where the Detachment arrived at 4 in the afternoon with several prisoners, after a forced march, or rather running 35 miles; Lieutenant Davis being joined by Lieutenant Brabyn with a reinforcement of thirty Soldiers joined the Major at 9 o'clock that night.

Philip Cunningham the Principal leader, who was carried among the wounded to Hawkesbury being still alive, and very properly considered by Major Johnston as a proper object to make an immediate example of, by virtue of the Martial Law that then existed, and the discretionary power given him by His Excellency, and after taking the opinion of the Officers about him, directed him to be publicly executed on the Stair case of the Public Store, which he had boasted in his march he was going to plunder.

As the principal Body was dispersed, the Detachment returned to Parramatta on Wednesday morning with a great number of Prisoners taken in Arms; and on Thursday morning received His Excellency's personal Approbation and Thanks for their animated and Soldier Like conduct and great perseverance in the fatigues they had undergone.

Seventy of the Insurgents, armed with musquets of which they had stripped the settlers, commanded by Humes having missed joining the main body, were concealed about the Castle Hill Road, which occupied the attention of the Detachment and Association at Parramatta. After the defeat, the Insurgents took advantage of the Proclamation, which extended Grace to those who gave themselves up in 24 hours, and great numbers were constantly coming in and delivering themselves up from noon on Monday and others were brought in prisoners with their arms by Lieutenants Davis and Brabyn's Parties.

Several parties of Settlers and others now pursued the Insurgents in all directions; and from Monday noon to Friday evening upwards of 300 were taken or gave themselves up, most of whom were dismissed and sent to their respective labour, with a caution and reprimand.

Ten of those who were selected from upwards of 200, as being most forward, including the two leaders Johnstone and Humes, were tried on Thursday at Parramatta by a General Court Martial, when they were all sentenced to be hanged - Johnstone and Humes to be hung in Chains: A part of the Sentence was carried into execution at 6 o'clock on Thursday evening, upon Humes, Charles Hill, and John Place, who acknowledged the justice of their sentence. Humes gave much important information, respecting the secret contrivers; and on Friday morning Johnston, Harrington, and Neale were executed at Castle Hill, Johnstone giving a similar information to Hume's; and on Saturday Brannan and Hogan suffered at Sydney, Burke and McCormick being Reprieved. Five others received Corporal Punishment; and about thirty were ordered to the different Gaol gangs until they can be otherwise disposed of.

Thus ended a sudden Insurrection, that was as unexpected as it is decidedly put an end to by the great assistance given to the measure which the exigency of the moment required.

On Friday afternoon Major Johnston's Detachment marched into Sydney, where they were received by the Regiment, and dismissed amidst the gratulations of their Comrades and Spectators; and

On Saturday morning His Excellency arrived at Sydney, after repealing Martial Law in the Interior. On his arrival at the Regimental Parade he was received by Lieut. Col Paterson at the head of the New South Wales Corps under arms, and received the Military Honours due to his Situation.[2]

1). Select here to read details from the Sydney Gazette of the first four executed: (Philip Cunningham who arrived on the Anne in 1801; Samuel Humes arrived on the Hercules in 1802; John Place and Charles Hill)

2). Convicts sent to Newcastle after the Rebellion

[1] Bloody battle . . . a painting by an unknown artist depicts the Battle of Vinegar Hill, where several hundred convicts broke out of Castle Hill prison farm to take on the British redcoats. Photo: National Library of Australia