Alexander Shand arrived in Hobart as a cabin passenger on the Deveron in June 1822. He and another passenger Mr Butcher imported several sheep of the pure Merino breed which survived the voyage well. [6]


James Lachlan McGillivray was also a passenger on the Deveron. He had received a grant of land in Van Diemen's Land however transferred this to New South Wales.

Alexander Shand was in Sydney by November 1822. He was informed by the authorities that he would be granted land in proportion to the means he possessed to bring the land into cultivation and was requested to forward the number of convicts he would be able to permanently take off the stores. [7] He decided to make a selection on the Hunter River and made arrangements to proceed there.

On arrival in Newcastle the men would have stepped out onto a wooden wharf. They would have seen the handsome stone built church high on the hill and cottages dotted throughout the settlement. Convict chain gangs worked about the town with soldiers of the 48th regiment guarding them. Select here to find some of the buildings in Newcastle in 1822.

Alexander Shand decided on a selection of land on this excursion and on his return to Sydney informed the authorities of the number of convicts he could take off the stores. The location of his grant can be seen centre right on the map below and as Elderslie on Joseph Cross' 1828 map of the Hunter River. 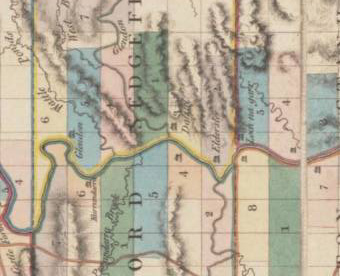 
On 17th January 1823 he was informed that he would be made a grant of 2000 acres together with convicts to be victualled from the store at Newcastle from the date he took up his grant [4]. Just two weeks later on 1st February 1823 Major Morisset was informed that the following people were granted permission to proceed to Newcastle on the Mariner.......

In June 1823 Alexander Shand was provided with 2000 bricks purchased from government. They were perhaps used in part to construct the four room house and attached kitchen that was described at Elderslie in 1830.

Skilled workers were scarce in the colony and settlers were required to pay bonds for them. Alexander Shand was displeased to have been assigned a farrier Joseph Swales instead of a blacksmith and requested his bond be returned, however this was denied. [5]


James Phillips at Paterson had a similar complaint about the convict carpenter who had been assigned to him and could not build a door or window.


James Tallent, a plasterer who arrived on the Tottenham had been assigned to Shand however the assignment was disputed and Tallent was removed from Shand's farm in 1824 by bush constable Constable Joseph Sedgley.

Around 1824 James Kerton, ex-convict carpenter was employed by Alexander Shand to make furniture.

By February 1824 Shand was applying to be supplied with cows from the Government herd and to be assigned more servants. He received a Newcastle town allotment in 1824.

In June 1824 Alexander Shand returned to Hobart on the Guildford. He gave his address at this time as Eldersly, Hunter's River. [1]

Dr. Henry W. Radford acquired this estate. He resided at Eldersly/Elderslie until 1829.