Use the Search Box above to find your Hunter Valley Ancestor.
John Butler Hewson arrived on the Mangles in 1820. He was employed as a Constable at Newcastle in 1831. In 1832 was appointed gaol keeper at Newcastle gaol [1]

'J.B. Hewson (formerly of the Union Inn) respectfully announces to his friends and the public generally that he has recommenced business as a licenced victualler in those newly erected premises opposite the Police Office known as the Woolpack Inn.

J.B.H. in again introducing himself to the public begs to inform them that no expense has been spared to render the accommodations worthy the support of his old friends and respectfully solicits a share of public patronage. Every description of Malt and other liquors spirits wine at Sydney Prices [2]

The Woolpack Inn was advertised for sale by auctioneer Alexander Flood in September 1846. It was said to be one of the most classic buildings in the town. With first-rate accommodation and numerous rooms of large dimensions it was on a lease of seven years from July 1845 at an annual rent of &pound89 (less than half the value) having been let under the influence of generous feelings by the proprietor towards the occupant. Connected with the Woolpack were three shops occupied by a baker, a tailor and a respectable haberdasher.

The Woolpack Inn was advertised for sale again in October 1847 - Situated at the corner of Hunter and Bolton Streets and opposite the court House, occupying the best position and being the best building in Newcastle.

Three cottages adjoining the Woolpack with a frontage to Bolton Street and a handsome house of seven spacious rooms with detached kitchen situated in Watt Street; two brick built cottages with verandahs with entrance from Watt Street; a good cottage built of brick, fronting Pacific Street with a beautiful view of the Port and Ocean; a valuable plot of land with frontage to the Market place Newcastle and to the principal streets and an allotment of land situated at Raymond Terrace opposite Hart's Hotel were also advertised for sale on the same day, 1st October 1847.[3]

John Butler Hewson was granted a licence for the Woolpack in 1847 and 1848.

The name was changed to the Prince of Wales c. 1850

Fire-On Thursday evening, about eigbt o'clock, a slight stir was created in the neighbourhood of the Court-house, by a report that the Prince of Wales hotel was on fire. On making enquiries we learn that the rumour had some foundation in truth, as the bed ourtains in one of the upper rooms did take fire, and for a short time created some considerable alarm to the inmates of the house. Directly the alarm was raised, five or six men rushed upstairs, tore the curtains down, and in that way quickly extinguished the flames. The accident was caused, we understand, through the carelessness of one of the servants in passing through the room with a lighted candle.[4]

In 1869 disaster struck the Jones family when Lewis Jones junior, a young lad known as 'Lewy' to his friends, died after falling from the precipice at Shepherd's Hill near the Horse shoe Bend. He had been throwing rocks from the cliffs with his friends and while standing on a ledge of the rocks, the earth gave way beneath him and he fell to the bottom, almost 200 ft. When his body was conveyed to his parents residence at the Prince of Wales, all the people of the township lined the streets to pay their respects to the bereaved parents.

In 1878 the Maitland Mercury reported: The premises at the corner of Bolton and Hunter streets, long known as the Prince of Wales Hotel, with the two cottages in its rear, were yesterday bought at auction for the Bank of New Zealand for the sum of 5000 pounds. It is intended to renovate entirely the front portion of the building for the purpose of converting it into a branch of the New Zealand Bank, the houses in the rear having to be removed for the building in their place, of a residence for the Bank manager. [6] 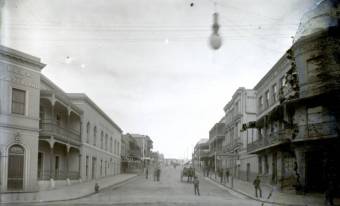 Bolton Street looking south. The Bank of New Zealand can be seen on the left of the photograph. Click to enlarge.


In reminiscing about Newcastle many years later George Priest recalled the Woolpack Inn - Another familiar hotel was the Woolpack, afterwards the Prince of Wales at the corner of Hunter and Bolton street. The old building has disappeared and in its place stand the premises of the Commercial Banking Company, of Sydney.

1). In 1856 John Butler Hewson was granted a licence for the Union Inn in Blane Street Newcastle [5]